On the opening day of Barcelona's second test, Mercedes ran the soft tyres for the first time this year with Rosberg clocking a 1m23.022s just before lunch, finishing 0.207 seconds clear of Valtteri Bottas in the Williams, whose time was set on the ultra-softs.

It was an impressive performance from Mercedes, which focused on low-fuel and qualifying speed in the morning before changing tack in the afternoon when Hamilton took over the car.

The reigning world champion completed a short stint on the softs before completing three stints on the mediums as part of a 66-lap run.

Fernando Alonso suffered what McLaren described as a "small telemetry" glitch before lunch, but the team got him back out midway through the afternoon.

The two-time world champion clocked the third quickest time, 1.713s off the pace, and put 93 laps on the board.

Ferrari's Kimi Raikkonen had spent much of the day in second before he stopped out on track just after lunch.

He returned to the track late in the afternoon and he ended the day with 71 laps on the board, 100 fewer than Rosberg and Hamilton managed between them.

Red Bull suffered a long delay after a brake casing problem caused a small fire at the back of the RB12, with Daniil Kvyat rejoining in the afternoon to clock the fifth fastest time.

Hamilton was sixth, ahead of Max Verstappen and Nico Hulkenberg, both of whom managed more than 100 laps apiece.

The 2016-spec Sauber proved to be reliable straight out of the box as Felipe Nasr clocked 103 laps for the ninth quickest time.

Renault's Kevin Magnussen was 10th, but caused a red flag with a few minutes to go, when he stopped out on track having completed 119 laps.

Manor's Rio Haryanto had a troublesome day with the Indonesian missing most of the morning session as his team worked to fix a small oil leak. 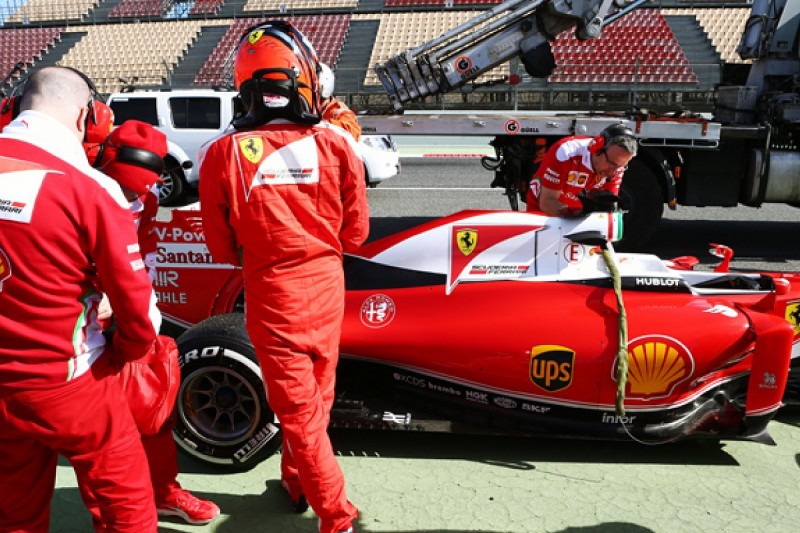