Bottas edged the other Red Bull of Daniel Ricciardo by just 0.035s in Baku despite having to use ultrasoft tyres to the Australian's supersofts.

However, Verstappen's sideways slide into the Turn 5 barriers meant Red Bull's encouraging start to the street circuit event had a sour note as well.

The first half of the session was a two-by-two affair as first the Mercedes duo jostled over P1 and then the Red Bulls came to the fore, with Verstappen and then Ricciardo going quickest.

Several drivers complained about low grip and Brendon Hartley had a trip down the escape road at the tight Turn 8 into the castle section, but the first real victim was Verstappen.

He lost control of his Red Bull under braking for Turn 5 and appeared to overcorrect the rear of the car stepping out heading towards the 90-degree left-hander.

That swung the rear round to left and caused the car to slide sideways into the barrier on the outside.

A virtual safety car was deployed for almost 10 minutes as the stricken Red Bull was removed to safety. 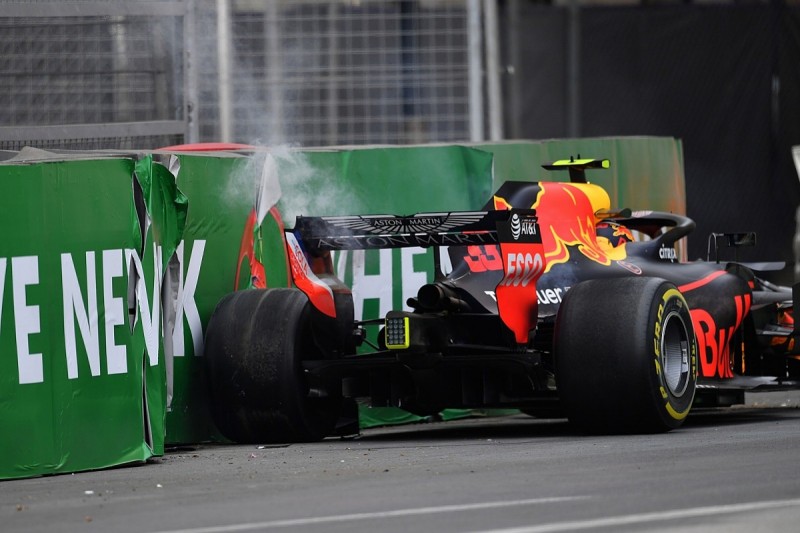 Significant improvements followed, with Hamilton jumping to first on ultrasofts despite a poor final sector.

Ricciardo, on supersofts, got back ahead of the four-time world champion with a 1m45.150s, but Bottas cleared both on his first ultrasoft run with a 1m44.242s.

That remained the benchmark to the end of the session although Ricciardo, still on supersofts, improved to a time just 0.035s slower as Hamilton remained almost a second adrift of his team-mate.

Sergio Perez took advantage of Hamilton's mistake to go third-fastest for Force India as the chequered flag came out, within a second of Bottas's best.

That knocked Hamilton to fourth and, as Esteban Ocon backed up Perez in fifth place, meant Verstappen was shuffled back to sixth.

Neither Ferrari driver set a representative lap time, with championship leader Sebastian Vettel 10th and 2.2s off the pace and Kimi Raikkonen 15th after ending his session early so major work could take place on his car in the garage.

McLaren's plan to experiment with its set-up in Friday practice to reduce its top-speed deficit in Baku appeared to work in FP1 as Fernando Alonso set the seventh-fastest time, just ahead of another driver who has struggled for top speed this season.

Sergey Sirotkin gave Williams a boost in eighth, ahead of Pierre Gasly's Toro Rosso, although Sirotkin was one of several drivers to suffer on the low-grip circuit.

The Russian driver, Bottas, Hamilton, Hartley (again), Carlos Sainz Jr and Romain Grosjean all ran wide or had trips down escape roads at some point.

Sainz ended up at the foot of the times thanks to a combination of that mistake and Renault spending time trialling a new front wing, rear wing and bargeboard package in FP1.