Ricciardo first hit the front just over 10 minutes into the session with his first serious flying lap on supersofts.

He then improved his time to 1m43.512s to top the timesheets before the field started to switch to ultrasofts for qualifying simulation runs.

With drivers struggling to avoid overheating the rears on their ultrasoft laps, Ricciardo was still fastest when he headed out for his qualifying simulation run despite Mercedes' Valtteri Bottas posting a lap just 0.058s slower.

This was enough to secure him fastest time, although Raikkonen did get close using the ultrasofts as he claimed second place.

Max Verstappen, who crashed during Friday's first free practice session, survived a light brush of the wall to set the third fastest time, 0.116s off the pace.

He also locked up and visited the Turn 3 escape road on his first run.

Bottas was shuffled down to fourth, 0.775s off the pace just over a quarter-of-a-tenth ahead of Mercedes team-mate Lewis Hamilton.

Hamilton set his best time of 1m43.603s on his second push lap on ultrasofts, but twice set the best first sector of the session to date later in the run then could not complete the laps - once as a consequence of locking up and running wide. The second of those attempts ended up as the fastest first sector of the whole session. 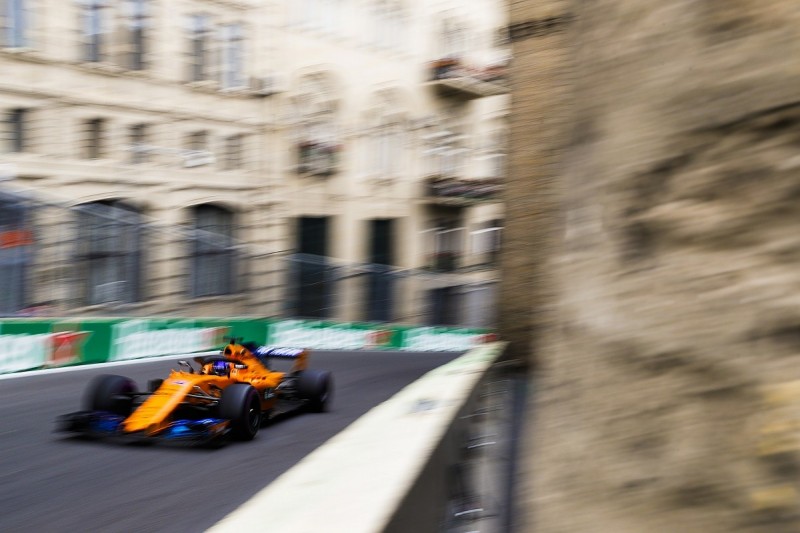 McLaren's Fernando Alonso was one of the last to post a quick lap using the ultrasofts, but when he did it was enough to be best of the rest in sixth place, 0.905s off the pace and just a tenth behind Hamilton.

That put him ahead of Force India's Esteban Ocon and Renault's Carlos Sainz Jr, with Kevin Magnussen ninth for Haas.

Nico Hulkenberg was 10th fastest for Renault, posting his time after a plank change was needed following his first run.

He later complained about a suspected braking problem, but the team suggested over the radio it could not see any issue.

Sebastian Vettel had a difficult session, ending up 11th and 1.332s off the pace after making several visits to the escape roads amid struggles under braking.

He set his best second and third sector times on his second quick lap on ultrasofts, but a slow first sector meant he did not improve on the lap time he set on the first attempt.

Vettel was just ahead of Force India's Sergio Perez, who paid a late visit to the Turn 3 escape road, with the second Haas of Romain Grosjean 13th ahead of Lance Stroll.

Sauber driver Charles Leclerc, who had an off-track moment at Turn 1, was 16th fastest ahead of the Williams of Sergey Sirotkin - but team-mate Marcus Ericsson was slowest after suffering a gearbox problem on his ninth lap.