The Ferrari driver led the way after the first runs in Q3, but Yuki Tsunoda crashing with just a few seconds of the session remaining – and Carlos Sainz Jr also hitting the barriers just behind the AlphaTauri – secured Leclerc’s pole ahead of Lewis Hamilton and Max Verstappen.

The session had already been heavily disrupted and delayed by three other red flags, caused by Lance Stroll and Antonio Giovinazzi crashing in Q1 and Daniel Ricciardo doing likewise in Q2.

Leclerc’s 1m41.218s initial lap in Q3 came as he led the pack around, but crucially picked up a significant tow when he caught up with Hamilton – completing a second warm-up lap running behind team-mate Valtteri Bottas – in the closing stages of the track.

This boosted Leclerc to a 0.232s advantage over Hamilton when the Mercedes drivers did complete the first of what should have been two runs in Q3, with Bottas ending up down the order as he had towed Hamilton.

Red Bull, the favourite for pole, ended up with Verstappen in third as he could not match Leclerc on the opening Q3 runs despite being towed by team-mate Sergio Perez.

Pierre Gasly took fourth as the AlphaTauri drivers completed their first Q3 laps in the middle part of the segment when the rest of the top 10 were in the pits preparing for the final runs that were ultimately aborted.

Tsunoda towed Gasly around – the rookie’s lap ending up being good enough for P8, with Bottas shuffled down to 10th.

Along with the rest, the Finn never got the chance to improve as Tsunoda – who had stayed out for a second go following a cooldown lap where the AlphaTauri drivers became mixed in with the rest of the pack, now preparing for their final runs – crashed at the Turn 3 90-degree left at the end of the back straight. 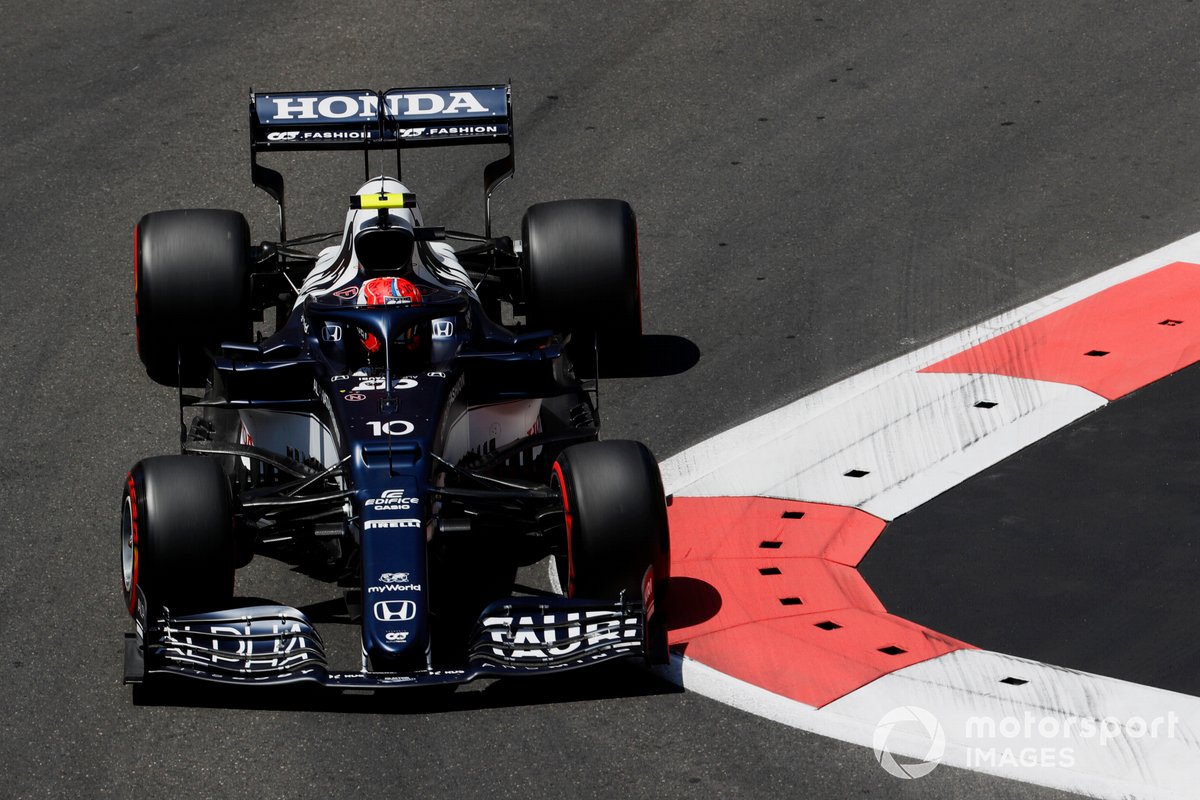 He braked too late and locked his left-front, which sent the Japanese nose-first into the barriers, with Sainz “losing the focus” as he followed Tsunoda’s lock-up and crash, the Ferrari’s rear swinging around and its front wing being knocked off against the wall on the inside of the Turn 3 runoff area.

Q3 was ended with a second still on the board which secured Leclerc, who had been leading the pack through the final aborted flying laps, in P1.

Behind the polesitter, Hamilton, Verstappen and Gasly came Sainz, Lando Norris and Perez, while Fernando Alonso was sandwiched between Tsunoda and Bottas in P9.

Norris was subsequently docked three places and handed three penalty points on his license for a red flag procedure breach in Q1, when he failed to come into the pits after Giovinazzi's crash.

Q2 ended 90-seconds early after Ricciardo locked up his front left and slid straight into the wall on the outside of Turn 3.

The McLaren’s right front was knocked off in the impact and the middle segment was not restarted, which meant several drivers – including Ricciardo – were eliminated based on their initial run times.

Sebastian Vettel was vocally livid to miss a Q3 spot by 0.029s as he ended up P11, ahead of Esteban Ocon, who had clipped the wall with his right rear exiting the same corner where Ricciardo, who qualified 13th, would later crash.

Kimi Raikkonen was 14th ahead of George Russell, who maintained his 100% progression from Q1 into Q2 for Williams in 2021.

This came after he missed the opening minutes of Q1 as his team worked to switch him back to a previously used engine, as the new one he had been running in FP3 suffered a water pump leak and had to be removed. 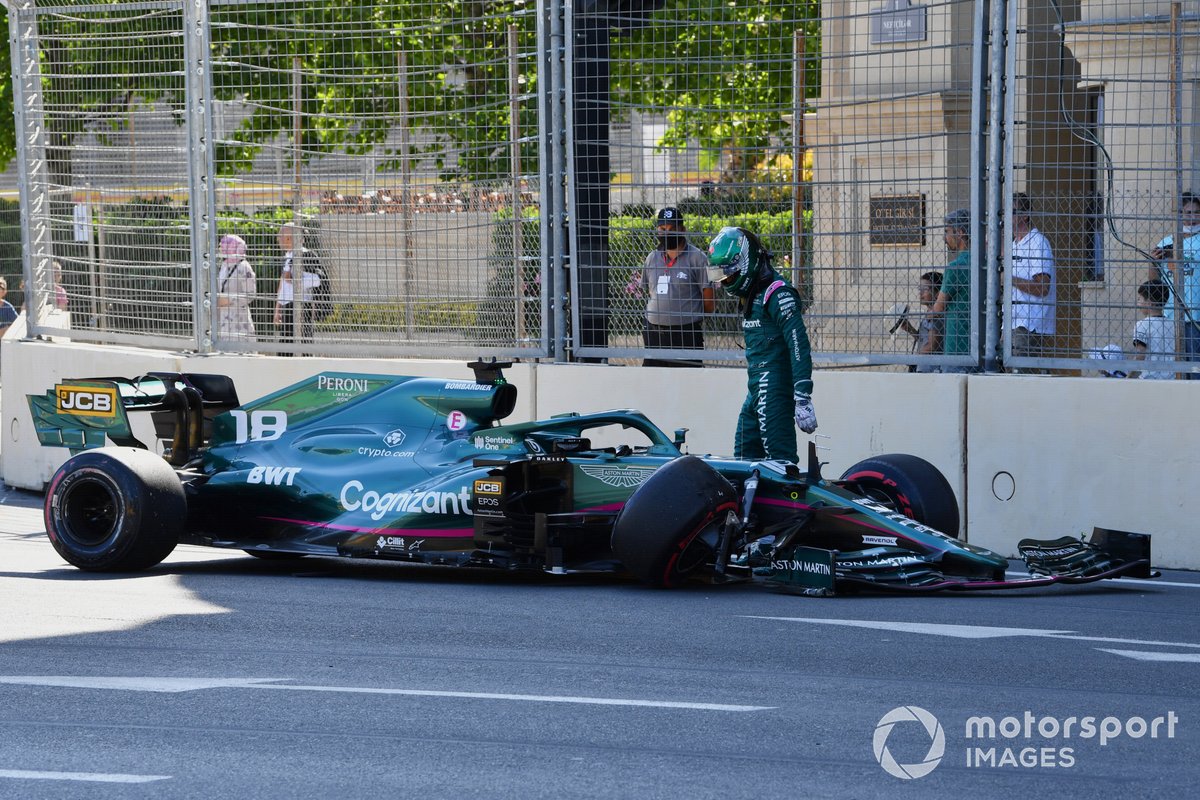 In Q1, the incidents involving Stroll and Giovinazzi meant the opening segment lasted over 40 minutes.

Both drivers hit the wall at the fast Turn 15 left – the turn heading downhill at the end of the second sector where Leclerc and Verstappen crashed in FP2 and FP3 respectively – with Stroll’s occurring first just three minutes into Q1.

The Aston Martin driver struck the wall nearly square-on with his right front after sliding to the incident with understeer.

The impact snapped the suspension and he pulled over to the inside of the track’s final real corner, with the red flags brought out when only Leclerc had completed a timed lap, as he had been running at the end of pack.

After a 12-minute delay the session restarted, with the Mercedes pair switched from mediums to the softs that the rest of the field were running, but proceedings only lasted a further five minutes before Giovinazzi hit the wall.

The Alfa Romeo driver locked his left-front and went further into the barriers than Stroll, Giovinazzi stopping immediately with the right-side of his car heavily damaged.

The red flags returned with the Mercedes drivers among those still yet to set a time, although Hamilton eventually took his used softs to the fastest time in the opening segment.

When Q1 eventually finished, Nicholas Latifi and the Haas duo were eliminated, with Mick Schumacher leading Nikita Mazepin, who had to take to the escape road at Turn 4 on his final flying lap – where he was running just in front of Hamilton.