But even with bigger rivals like McLaren and Renault poised for a breakthrough, the teams is convinced it can put up a good fight after punching above its weight in recent years, and has pinned its hopes of progress on a major update package for the start of the season, which emerged on the Friday of the Australian Grand Prix.

"It touches most areas as far as aerodynamics are concerned," said technical director Andy Green of the upgrade.

"Everything apart from the front wing has changed. The front wing will be [at the] next race - and it was always going to be the race after."

Green was happy with the performance of the new parts and feedback from drivers Sergio Perez and Esteban Ocon.

"So far it looks good," he said. "The drivers are happy, they can feel a big difference from Barcelona.

"We just need to set the car up differently now from where we migrated to in Barcelona.

"They can attack the corners harder basically, which is what we were hoping they were going to say.

"Now it's changed the way the car works, the way it works the tyres, so we're having to go through that loop again now to re-optimise." 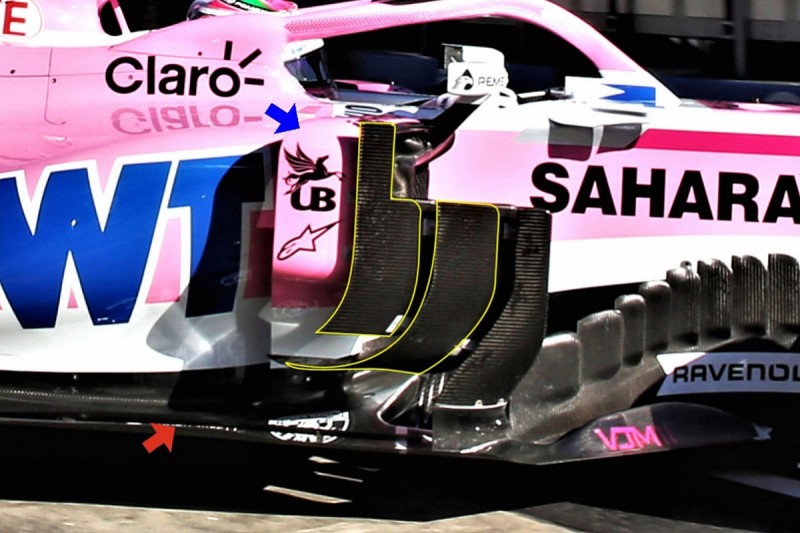 Force India felt that having its full 2018 aerodynamic specification available for pre-season testing was going to put too significant a demand on it resources, so instead it opted to focus on shaking down and testing its new car in a well known configuration, as the new car was dressed in last year's bodywork.

An area that Force India has focused its updates around is the sidepod's flank, as it has reshaped the vertical airflow conditioners (blue arrow) that had previously been split in two. They now form a solo arch that borders the sidepod itself.

The forward deflector element that was introduced during the latter part of 2017 now forms the leading edge of the overall quartet of elements. These deflect the wake generated by the front tyre away from the sidepod and floor, improving flow around the car's midriff.

A central pair of deflector panels that supplement the quartet (highlighted in yellow) are shaped in order to maximise this effect, as they also roll the airflow that passes between them and the sidepod.

The hindmost of these two elements also features the skyscraper-style tab that previously adorned the forward split of the sidepod's airflow conditioner, showing that Force India's aero team are particularly focused on protecting the sidepod's shoulder from any erratic flow created upstream.

Force India has also extended the detached floor scroll (red arrow) as part of this package of updates. 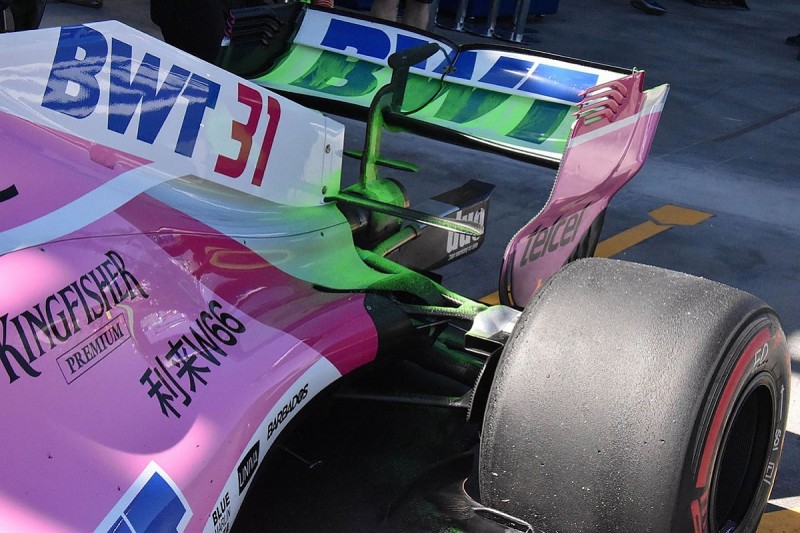 The team has adopted a lower T-wing, which features a prominent Gurney tab on the trailing edge that projects even further on the outermost tip.

Added restrictions to bodywork around the exhaust mean the team has also added a very simple single-element winglet above it, mounted either side of the rear wing pillar. 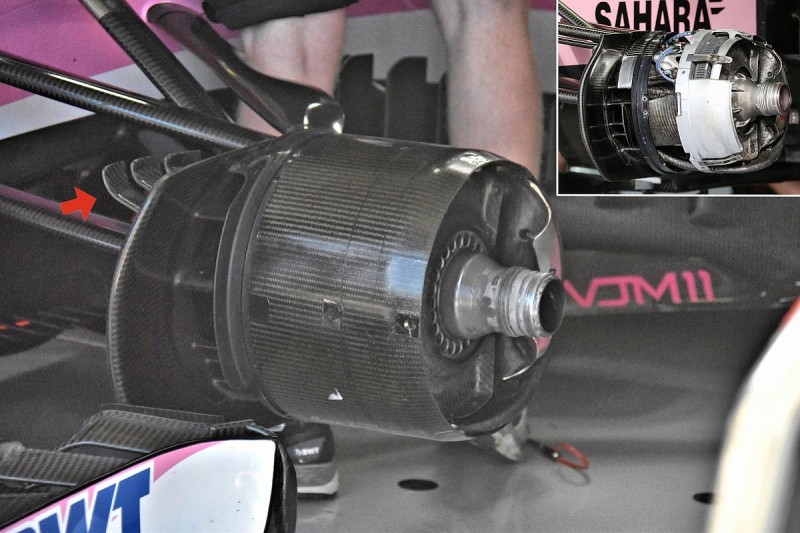 Force India employs an open basket style brake drum arrangement (VJM10, inset), which allows it to use different cake tin designs so it can close off or open up as much of the brake as necessary for the given circuit and conditions.

It appears that for Australia the team has experimented with closing the drum off, likely in a response to how it needs the temperature being created by the brakes within to radiate out through the wheel rim. This in turn interacts with the tyre's core temperature.

The team appears to have also dispensed with crossover pipework that transports airflow across the forward face of the brake assembly for aerodynamic effect. This is likely in response to efforts to improve how the blown axle works.