Daniel Ricciardo would have demoted Grosjean to seventh had he not had a flying lap interrupted by a red flag, but the Haas driver was still comfortably best of the rest behind Mercedes, Red Bull and Ferrari.

"We need to see if it's real, the no man's land, and what has happened to the other teams," said Grosjean.

"No man's land is not ideal but on the other hand Force India was pretty happy last year.

"If you can end up in that position it would be amazing, but we're fighting big teams - McLaren, Renault, Force India - and they have got a lot of experience and resources as well.

"It's going to be a very interesting fight and hopefully we can stay clear of them."

Grosjean said some mapping was "not 100% on it" and there is still performance for Haas to find as long as it focused on itself and not the big teams ahead.

"We compete without competing, we're still a bit too far from them," he said.

"The main thing was to do our own work and focus on what we can do.

"Of course you always want to see where you compare to others, but it's the best way as well to get lost."

Grosjean broke a bargeboard hitting a kerb in Friday practice, but Haas team boss Gunther Steiner said it was not a repeat of when Haas suffered some aerodynamic parts failing during testing.

Steiner said he was a little surprised by Haas occupying a big gap between the top three and the rest but was cautious as it was only Friday practice.

"There are still a few things we need to figure out: engine modes, weight and stuff like this," said Steiner.

"I will be pretty comfortable to be in no man's land, in this position.

"We cannot catch the big ones for obvious reasons but if the others are three tenths behind us I would be a happy guy." 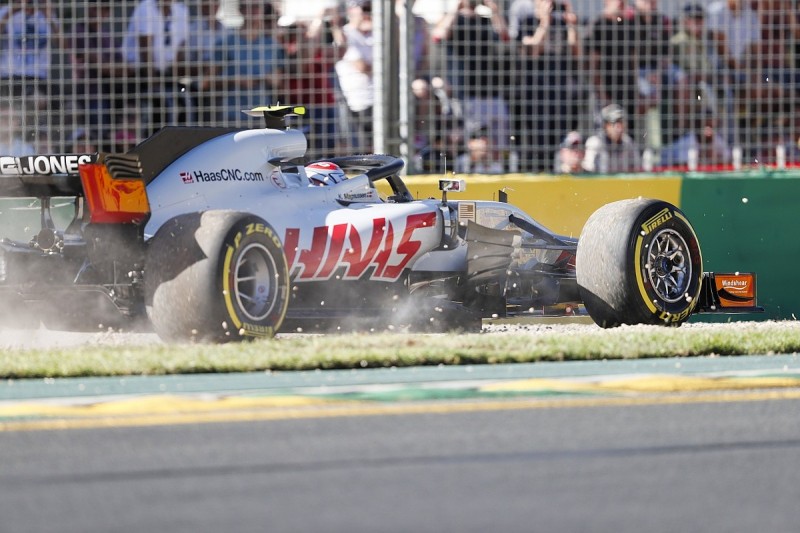 Kevin Magnussen endured a disrupted FP2 that included some "little crazy problems", but backed up Grosjean's pace with ninth, 0.6s slower than his team-mate.

His troubles included Haas performing a throttle pedal adjustment, after changing the geometry from testing, and "at one point the interior of my helmet fell out".

"It's stuff like that, just a strange day in terms of weird problems, not something I can take too seriously," he said.

"I didn't go to the limit of the car at all. That confirms that the car is at least working again here.

"But last year we had some competitive races as well, so being inconsistent from last year is what is making us cautious so far."