Analysis: Does 2012 season hold the key to Formula 1's future?

Since Pirelli returned to F1 in 2011 there has been a marked decline in the number of overtaking manoeuvres, season upon season, as the table below illustrates.

Pirelli's brief when it returned to F1 was to increase the number of pitstops to two to three per grand prix after previous tyre supplier Bridgestone was managing just one per race.

The Italian manufacturer rose to the challenge by making tyres featuring deliberate degradation, which not only increased pitstops, but also overtaking moves.

After its first three seasons in F1, and with the switch to the 1.6-litre V6 turbocharged engine, the emphasis was placed on those systems, with Pirelli taking more of a backseat, conservative role with regard to its tyres.

The knock-on effect has been considerably fewer overtakes, along with pitstops, with the average this season per race only marginally above that for Bridgestone in its final year in 2010.

It is why Hembery has suggested that for 2017, when tyres are to become wider as part of the regulations to help make cars five to six seconds per lap quicker, the rubber should become more aggressive again too.

The 2012 season is viewed as one of the best of modern times, not only for its high proportion of overtaking, but also significantly for the fact there were seven different winners of the first seven grands prix, and a title race that went down to the wire.

As Hembery remarks, it all comes down to what F1 wants for 2017. What exactly is the brief being demanded?

Performance? Pirelli can produce tyres that will shave four seconds per lap off current times.

Overtaking? It has already shown from 2011-13 it can develop rubber that will fall away and shake up the racing.

Or both? Again, Hembery claims Pirelli can develop a tyre that will perform over a certain number of laps, but then 'fall off a cliff', necessitating an immediate stop.

As far as Hembery is concerned, a season like 2012 could easily be replicated if that is what is required.

"Maybe we can offer a more aggressive approach, as we did back in 2012, where the conundrum of the tyre was very difficult to master," Hembery told Autosport.

"In 2012 there was a lot of unpredictability, but the drivers didn't always like it."

There was considerable criticism, spearheaded by Michael Schumacher - the seven-time champion then with Mercedes - who claimed Pirelli's tyres were like driving "on raw eggs".

Four-time champion Alain Prost and Red Bull owner Dietrich Mateschitz derided the unpredictability of F1, yet there were also many who claimed it was the best it had been for many years.

As Hembery points out: "It's a question of really deciding what it is you want to achieve."

Romain Grosjean said back in July, the pre-2014 tyre meant drivers had to think about racing - something he favours.

The majority of drivers, though, according to Hembery, "prefer a different approach" to F1 rules.

"They want something where there is very little aero, lots of power, lots of grip from the tyres and to be able to push in the different stints from start to finish," he said.

Conversely, aero reduction and power increases will make little difference to the show if performance disparities between teams remain as great as at present.

"It still comes down to performance," assessed Hembery.

"If there is two seconds difference between the cars then it doesn't matter what you do with overtaking, the tyres.

"Look at [the race in] Brazil where everyone up to fourth was lapped.

"It's been quite a few years since we've had that difference in performance level between the cars.

"That needs resolving before you make any other changes." 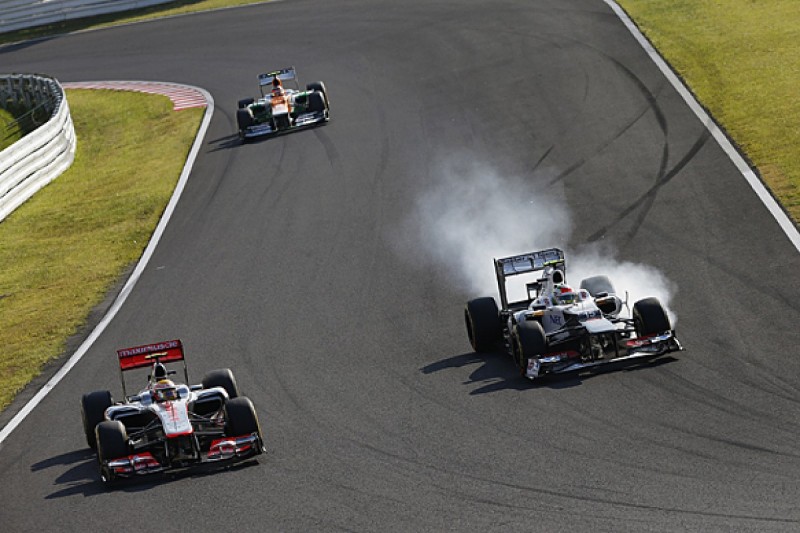 RML was a contender for Formula 1 budget engine deal

F1 stuck in a catch-22 over its revamp