Red Bull Formula 1 boss Christian Horner admits that the team should have joined rivals Mercedes in using medium tyres for the start of the Portuguese Grand Prix.

The squad has often mirrored Mercedes' strategy of opting to give Max Verstappen medium tyres to get out of Q2 and subsequently for the first stint of the race, but at Portimao the team went for an offset stratgey and gave the Dutchman softs.

Verstappen had a poor first lap that included a collision with Sergio Perez, and had to spend the early part of the race regaining ground on his way to a distant third place.

His team-mate Alex Albon had a disastrous time with tyre wear, making two stops and eventually finishing out of the points in 12th place.

"The tyres were a little bit of a black art today," said Horner. "I mean, the soft tyre was difficult to get going, and the medium tyre looked to be the best of the range. I think with 20/20 hindsight, if we could have done qualifying again, we would probably obviously look to start on the mediums.

"So Max hung on there on the first lap, while Alex lost some ground on the first lap and then he was able to settle in and obviously, look after the tyres as best he could.

"[Max] got pretty decent range, and then got on the medium and was much happier on that tyre. But of course, Mercedes were significantly up the road by that point in time. So that's where we were. So P3 I think was the optimum for Max, but obviously a more difficult afternoon for Alex."

Horner said the team had to investigate why Albon was so badly compromised by wear and that there was no option but to pit him a second time. 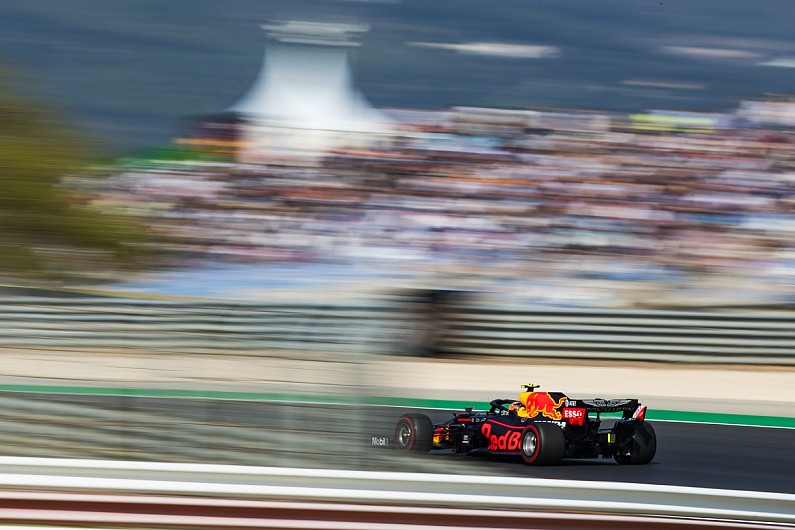 "Obviously it's been a difficult race for him, so we need to look at all of the data, all the information, try and understand why his tyre wear for example was significantly higher, he said.

"So plenty to look at, plenty to understand, and obviously he'll need to bounce back in less than a week's time.

"I think the left rear was pretty much down to the canvas. We could start to see that it was getting a little desperate, and I think after inspection after it came off the car, it wouldn't have got to the end of the race."

Albon, who is under severe pressure to save his seat for 2021, admitted that it had been a difficult afternoon.

"I think both cars struggled off of the line," he told Sky F1. "We didn't have grip at all to start the first lap, as it was all over the place. There were some tyres that clearly switched on for some teams, the McLarens, and Kimi [Raikkonen] was flying and looking like he was on a different track to us.

"It was just really tricky on those first two or three laps, and that is when we lost the positions. And once the tyres were up to temperature the car was actually pretty good.

"We spent the whole race under a gearbox of another car. We knew it was going to be hard to overtake here but I was struggling a lot at Turn 14 so you never really stayed close enough to get an opportunity into Turn 1.

"That was really it, the pace of the car was good but I couldn't really use it so it was frustrating, we did try the two stop and in hindsight it didn't work, but that was it."