Toto Wolff says Mercedes was "robust" in keeping Valtteri Bottas on his planned strategy during Formula 1's Portuguese Grand Prix, despite his request for soft tyres in the final stint

Bottas managed to take the lead in the early part of the race after overtaking the fast-starting McLaren's Carlos Sainz Jr, and retained his advantage until lap 20 when team-mate Lewis Hamilton moved ahead.

Bottas trailed Hamilton by around nine seconds shortly before Mercedes moved to pit both of its drivers, fitting Hamilton with the hard compound tyre at the end of lap 40.

After being informed over team radio that Hamilton was taking hards, Bottas replied "in that case, maybe we take the softs" as he looked to gain an advantage for the final stint.

Asked about the decision to keep Bottas on hards for the final stint despite his suggestion, Mercedes team principal Wolff said it would have been hard to justify splitting the strategies.

"We have done it on occasions, but it's always a tricky situation," Wolff said. 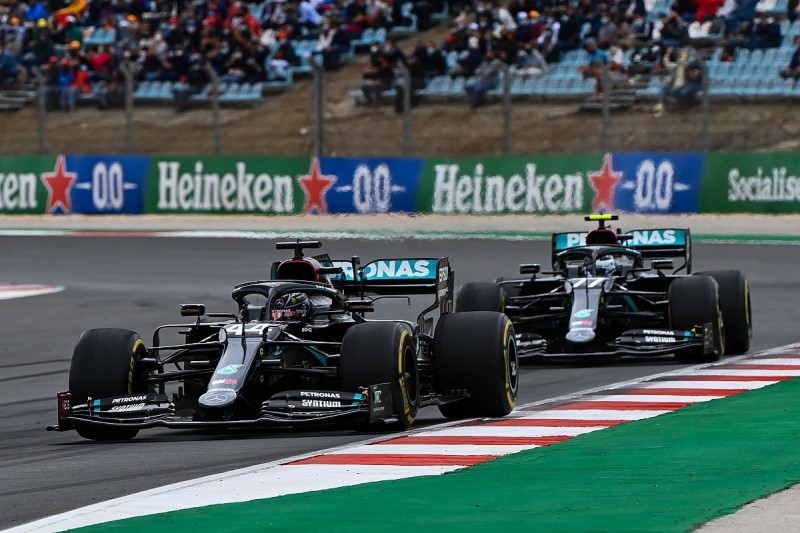 "If you ask the lead driver to put the hards on because you believe this is the right choice, and then the second driver starts to convince you about the other thing, it's very difficult to explain that you've basically reversed the cars.

"We don't want to interfere too much, and there will be situations where we ware going to allow these calls."

Wolff expanded on the decision by explaining that the data showed the hard was the best tyre for the drivers to take for the final third of the race, pointing to the struggles faced later on by Sergio Perez and Esteban Ocon, who both finished the race on softs.

"We were pretty convinced that the hard was the better tyre," Wolff said.

"All data that we've seen from cars out there leaned towards the hard outperforming the medium and the soft.

"When you look at Checo and Esteban at the end, the soft didn't function at all.

"It was actually the weakest tyre at the end of the race. We were pretty robust in our decision, because we expected it to be the better tyre."

While Hamilton felt he could have gone longer on the mediums before pitting, Bottas struggled towards the end of the opening stint as he reported a vibration on his tyres shortly before pitting.

"It's quite common that when a tyre is at the end of its life, there tends to be vibrations," Bottas explained.

"It was really just the tyre wear, and that forced us to stop at that point."