Sebastian Vettel set the fastest time ahead of Valtteri Bottas in a wet second practice session for Formula 1's 2020 Hungarian Grand Prix, where only 13 drivers set a laptime.

After Friday's FP1 session had been conducted under heavy skies at the Hungaroring, the rain hit the track on the outskirts of Budapest during the Formula 2 and F3 practice and qualifying sessions that preceded FP2.

Although the track was not as wet as was the case during the washed-out third practice for the Styrian GP last weekend, little running took place - particularly during the early stages.

It took until the 23rd minute of the 90-minute session for a time to be logged on the board, which came when Sergio Perez set a 1m43.862s on the extreme wet tyres.

He was joined on the track shortly afterwards by team-mate Lance Stroll and Kimi Raikkonen, with Stroll lowering P1 to a 1m42.380s shortly after Perez had skated across the gravel at the chicane after locking his front-left tyre.

Stroll's lap remained as the fastest time for nearly half an hour, before Vettel deposed him as the pacesetter.

Vettel, who was circulating with his team-mate Charles Leclerc, took three laps to better Stroll's time with a 1m41.564s, also on the extreme wets.

He stayed out on the same set and improved the fastest time to 1m40.464s at the one-hour mark, which remained as the session's best despite some drivers - including Vettel - taking to the track on the intermediates in the later stages.

Bottas became the first Mercedes driver to take to the track with 64-minutes gone, and he immediately moved into second with his first flying lap. 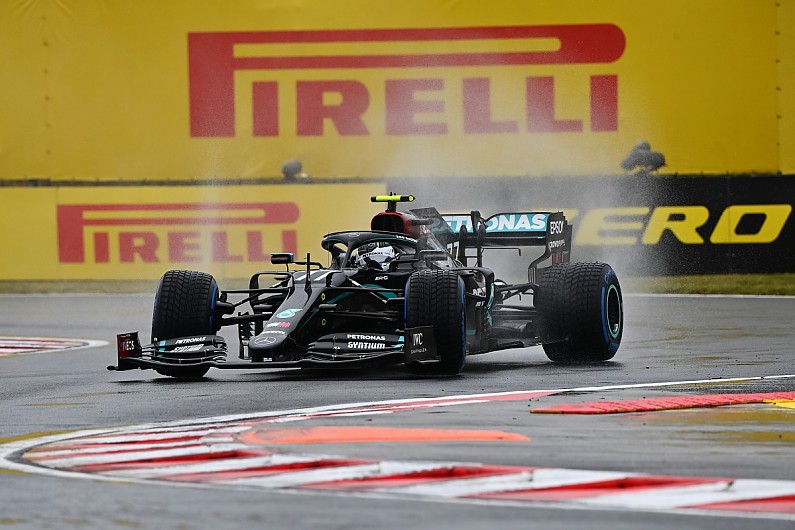 The championship leader had looked set to go fastest, but lost time in the final sector and pitted after that - with Bottas one of the drivers to later try the intermediates but not improve.

In the other Mercedes, FP1 pacesetter Lewis Hamilton appeared just before the 70-minute mark, but he only completed an installation lap on the inters and did not set a time.

Behind Bottas in the order came Carlos Sainz Jr, who jumped up to third with 20 minutes to go and then slip off the track onto the run-off at the Turn 2 left-hander on his next lap.

Stroll and Perez ended up fourth and fifth, ahead of Pierre Gasly, who was making his first appearance of the weekend after his AlphaTauri was confined to its garage for the whole of FP1 as the team investigated a power unit issue.

Max Verstappen did not venture out onto the track until there were barely 10 minutes to go for Red Bull, initially just for an installation lap on the inters before he switched to the wets for a late run and moved to P7 with 1m42.820s.

Romain Grosjean and Raikkonen both had off-track excursions on their way to eighth and ninth for Haas and Alfa Romeo, with the latter taking over his car after Robert Kubica had driven it in FP1 - taking it to the most laps of that session on 16 tours.

Leclerc finished 10th, 3.2s slower than Vettel's best, complaining he was losing the rear of his SF1000 early in corners as he lapped late on.