The Motorsport Images team has captured some superb photographs over the years, so we decided to ask one of its leading lights to pick out his favourite shots

Mark Sutton has been shooting motorsport for nearly 40 years and is one of the world's leading Formula 1 photographers.

The co-founder of Sutton Images followed much of Ayrton Senna's career and took some of the last photographs of the great Brazilian during the terrible 1994 San Marino Grand Prix weekend.

He's witnessed plenty of magical moments, so Autosport decided to ask him to select his favourite images - and explain what makes them special. Here are his 12 picks. 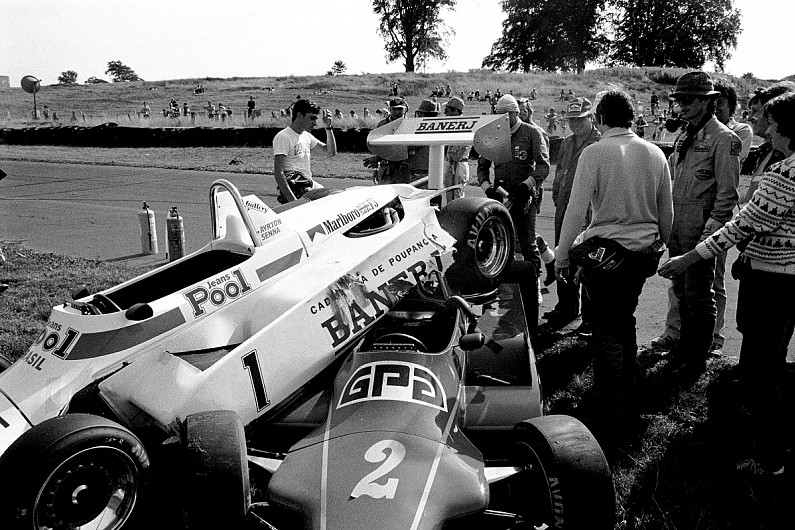 Photographing my first British Formula 3 race at my local track, Oulton Park, in 1983, I positioned myself out the back of the circuit. And when Senna lunged down the inside of Martin Brundle on lap two, they collided.

I got the photo of them side-by-side, but had to wind the black-and-white film. Then they touched and Senna landed on top of Brundle's car, just missing his head. They both got out unscathed and looked around the cars.

This is my capture after the race had finished. The images were used all over the world as the battle continued to the last round in Thruxton, with Senna winning the title. 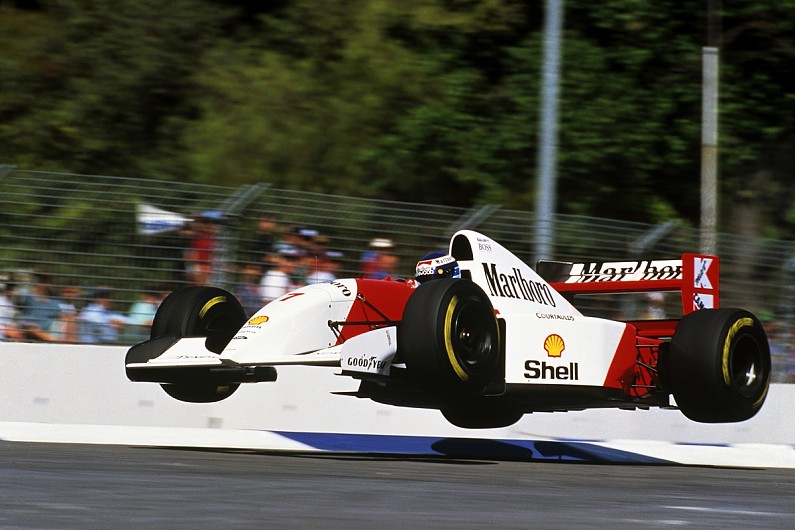 I went out for practice at Adelaide with about 10 other photographers and went behind a concrete wall and advertising hoarding. I was doing pan shots against the fence, then I heard a slight screech of the brakes and aimed my camera towards the car, Mika Hakkinen's McLaren, as it flew over the kerbs through the air.

I kept my finger on the button as the car landed and headed back to the pits. I looked around to everyone else and said, 'Did you get that?' But everyone was quiet, saying nothing, so I kept quiet too.

Overnight I processed the film in a nearby lab and then, going through the images, there was a big scream followed by, 'Wow that's an incredible photo!'

I got X3 big prints made and took one to Hakkinen. He couldn't believe how high he was, as TV and everyone else missed it. Not to mention the engineer, who had wondered why there was a blip on the telemetry! This is Sutton Images' most sold image ever. 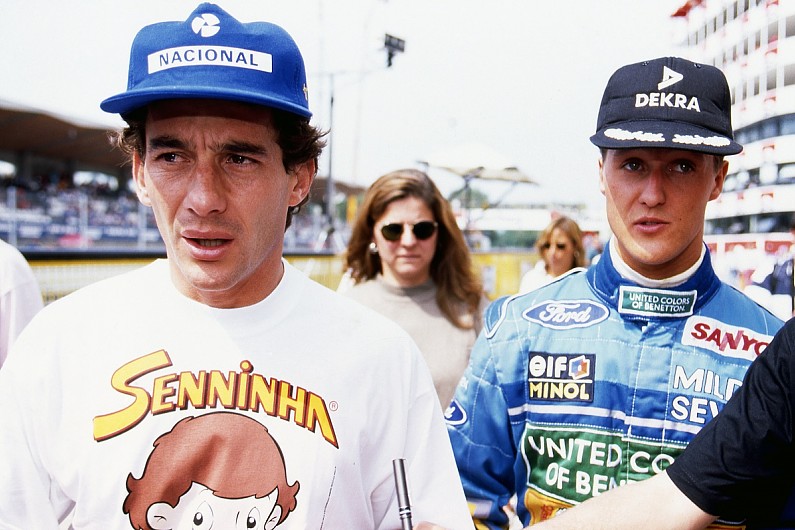 Sunday 1 May 1994 was a tragic day in F1 and this photo of Senna and Michael Schumacher walking down the Imola pitlane after the drivers' briefing clearly shows their emotions. It looks like they don't want to race, following Roland Ratzenberger's death on the Saturday.

It's an emotional photo for me, showing the established superstar and the man who would take over his mantle following that tragic race in which Senna would lose his life.

PLUS: Imola 1994: Memories from Senna's rivals 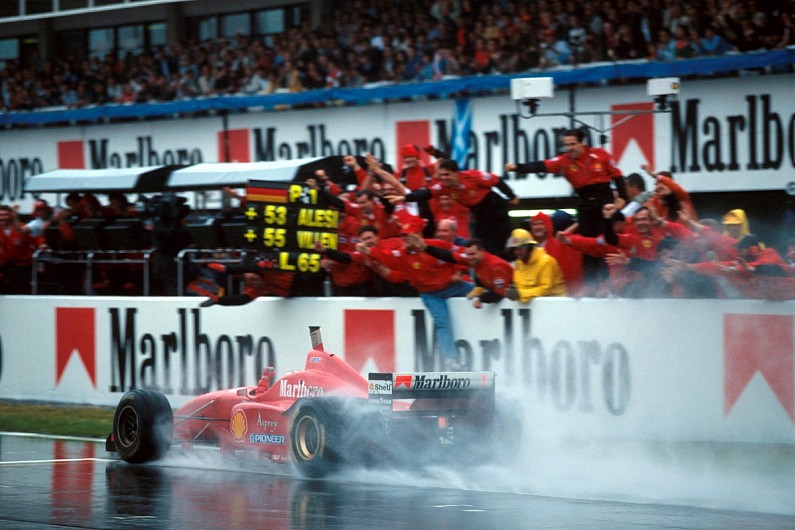 One of Schumacher's greatest victories was at the Spanish GP in Barcelona in a very wet race where he dominated in a Ferrari that wasn't the best car on the grid.

The first of his 72 Ferrari victories was a race that underlined his immense talent in the rain and why he earned the nickname 'Rainmaster'. He was lapping three seconds faster than the rest of the field after taking the lead from Jacques Villeneuve on lap 12 and never looked back after that. 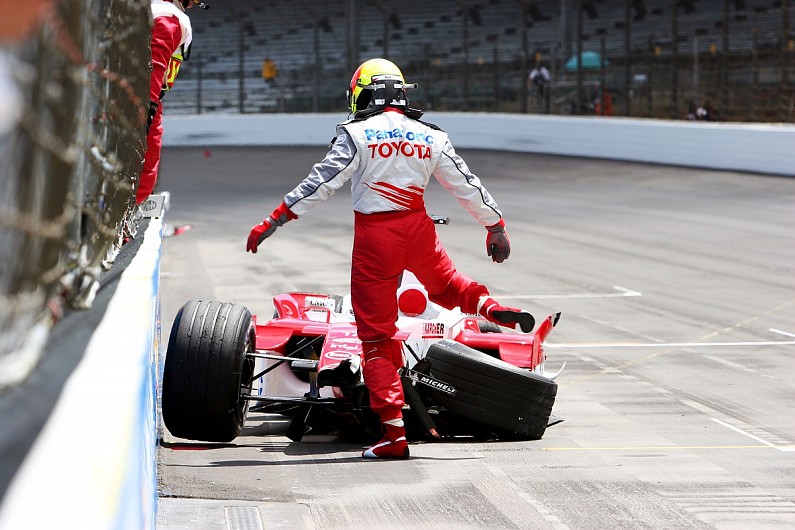 I was positioned on the pitwall in FP1 in Indianapolis when Ralf Schumacher suffered a tyre failure and crashed his Toyota heavily into the banked last corner. Showing his disgust, having also crashed at that corner the previous year during the race, Schumacher got out of his car and kicked it.

The impact was big enough that he would be replaced by test driver Ricardo Zonta for the race, but there was more intrigue to come. Shortly afterwards, the recriminations began and after much off-track discussion with the FIA and the Bridgestone teams failed to reach a consensus, the Michelin-shod cars couldn't start the GP.

After forming up on the grid, all 14 poured into the pits and retired, leaving the six Bridgestone cars to finish in the top six, with Tiago Monteiro's Jordan on the podium.

PLUS: The driver who gained most from F1's famous farce 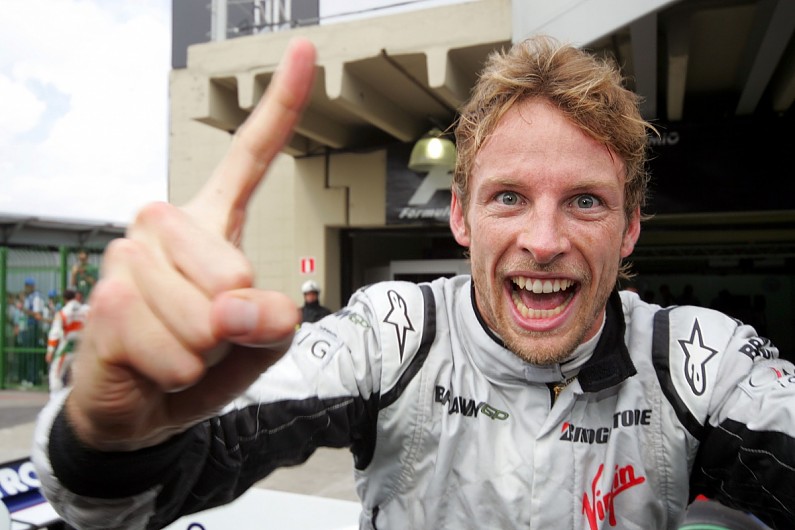 Jenson Button celebrated with pure emotions after clinching the 2009 Formula 1 World Championship by finishing fifth in the Brazilian GP at Interlagos.

After he took off his helmet in parc ferme, I shouted his name and he came within inches of my lens. The next day all the national newspapers in the UK used the images and it was on the front cover of that week's Autosport magazine. 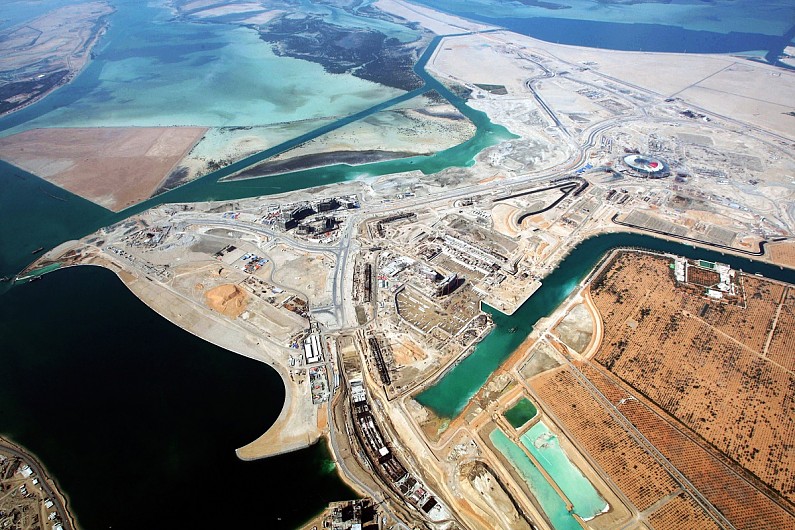 I was very lucky to work on the construction photos for the Yas Marina circuit in Abu Dhabi, starting in April 2007, and I managed 14 visits over the two-and-half-year project.

This image, taken in January 2009, was amazing because I had special permission to go 5000ft above the circuit, with the door open and shooting down on what is now the most expensive circuit and island project ever built.

You can see all the incredible infrastructure being installed, such as Ferrari World, hotels and roads around the circuit. The circuit opened for its first race in November 2009. 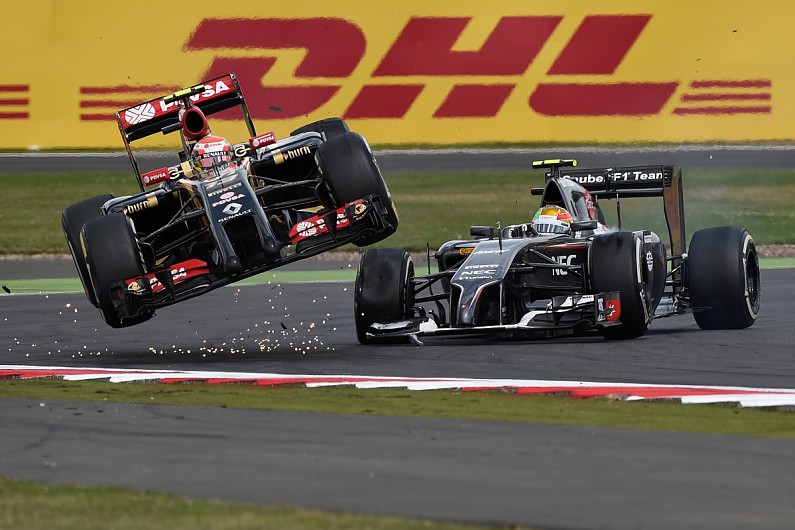 At the British Grand Prix it's nice to do something different, such as shoot the grid and then wander back to photograph the start from the rear as the cars head into the first corner. You're also then in position for Club corner, where there's always a chance of an overtake or incident under braking.

After their coming-together in the Bahrain GP earlier that year, I could see Pastor Maldonado and Esteban Gutierrez were battling. The Sauber jumped down the inside, the wheels touched and Maldonado was pitched airbone - a role reversal from Bahrain.

Maldonado was only in the air for a brief second and actually carried on with little damage, although later retired with loss of power, while Gutierrez had to retire and was given the blame by the stewards. 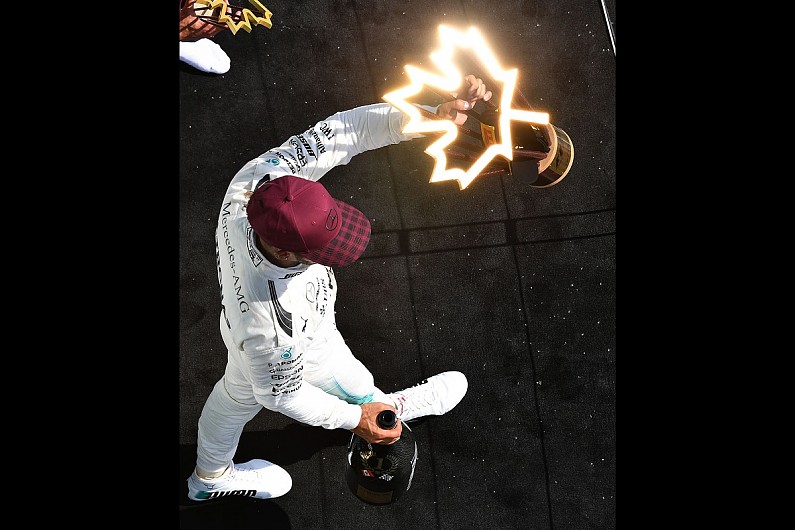 I was lucky enough to be in a privileged position on top of the control tower for the 2017 Canadian GP in Montreal. I shot the start and pitstops, as well as the celebrations as Lewis Hamilton enjoyed victory.

I didn't have such a good spot for the podium, but just kept shooting what I could. Then I saw a flash of light as I was shooting and thought that a flash had gone off.

When I looked back through the frames there was only one frame in which the sunlight had hit the trophy, which was in the shape of maple leaf, and I called it my golden moment. It was used on F1's and Hamilton's Instagram accounts - to show it was a one-in-a-million photo! 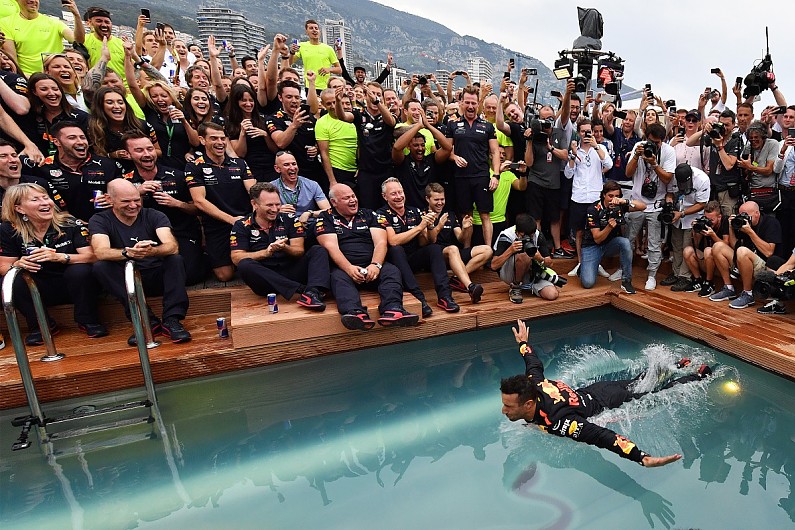 After winning the race in Monte Carlo, which he called 'redemption' after missing out in 2016 thanks to a Red Bull pitstop blunder, Daniel Ricciardo celebrated in his own way at the Red Bull energy station by diving into the pool.

I went to see Daniel a few races later to ask for some signatures for charity and asked him to sign one to me personally. He called it a "Belly Flooopppp", so I called this image the same name.

It's also one of my favourite images as it shows him almost floating on the water and the splash coming up, but he's not actually in the water yet! 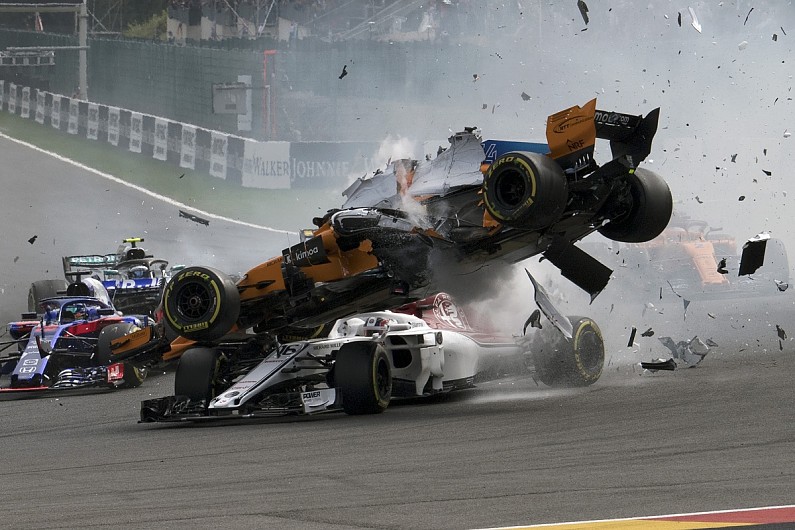 When F1 photographers go to the first corner at a GP, we are always waiting for a spectacular crash and this is exactly what happened at Spa in 2018, which was captured as part of a 60-frame sequence.

As the pack bunched up, Nico Hulkenberg's Renault launched Fernando Alonso's McLaren into the air. He then bounced on Charles Leclerc's Sauber, the halo fortunately saving him from potentially serious head injuries, before landing on the ground with a burst radiator. You could clearly see the tyre marks on Leclerc's Sauber afterwards.

The image was quickly transmitted back to the LAT Images offices and distributed around the world. 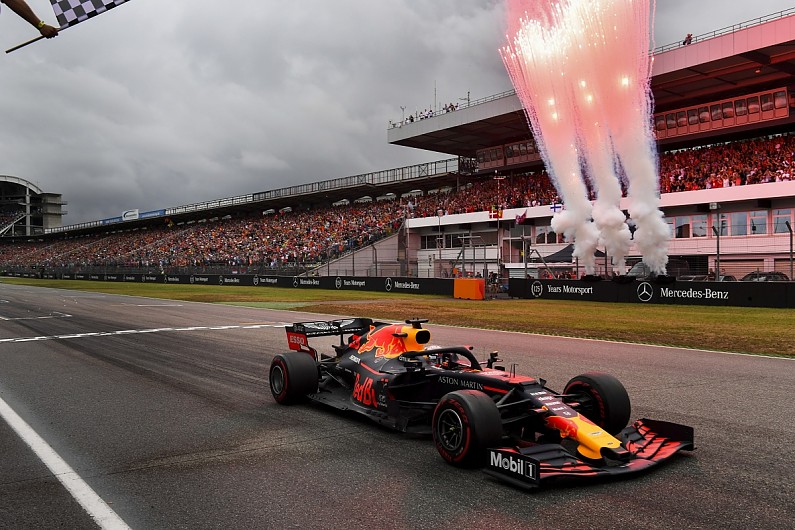 What a crazy race this was. With cars off and drama almost everywhere, there was something happening all the time, but I felt like I was in the wrong place the whole day. My saving grace was possibly this finish photo, which I took through a gap in the fence.

I got a great sequence as Max Verstappen celebrated victory, keeping my finger on the button until he passed me. I saw an explosion in the background, looked back through my camera and could see that fireworks had gone off exactly as Max passed me, which created the perfect photo of victory.