Carlos Sainz Jr's first Formula 1 podium and McLaren's first in five years is secure, after the FIA looked into alleged illegal DRS use in the Brazilian Grand Prix.

Sainz inherited third place after Lewis Hamilton picked up a five-second penalty for hitting Alex Albon out of second on the penultimate lap of the race at Interlagos.

While no formal investigation was announced, the FIA did request data from some teams - including McLaren - after complaints that DRS was used illegally under yellow flags during the grand prix.

That meant further changes to the results were possible, but Sainz has now been awarded his third-place trophy.

Sainz tweeted: "PODIUM! A bit weird not being there after the race, but still extremely happy.

"Today's race was just unbelievable. The one-stop strategy was difficult but paid off.

"Congrats to the whole team!"

It is the Spaniard's first podium in 101 starts, and McLaren's first since the 2014 season-opening Australian Grand Prix - 119 races ago. 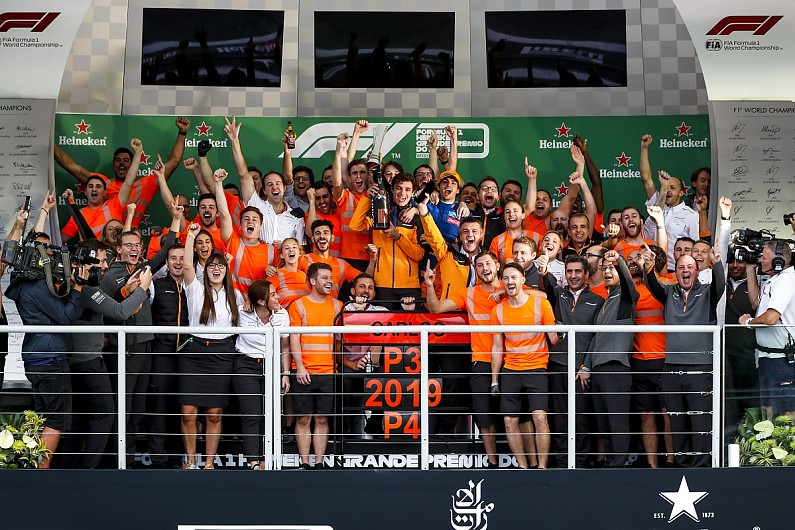 Team principal Andreas Seidl told Autosport: "It's a great achievement obviously, I'm very happy for the entire team after putting in a lot of hard work here at the track and back home at the factory.

"It's great motivation to make sure we keep working hard and fight for podiums in the future down to our own performance."

Sainz is seventh in the championship after a superb season in which he has previously earned a best result of fifth, three times, and he will end the year the best-placed driver who spent the full year in a midfield team.

His breakthrough podium was all the more unlikely given he started the race last after failing to take part in qualifying because of an ignition wiring problem.

As he was starting at the back anyway, McLaren gave him an all-new Renault engine for the grand prix.

Seidl said: "We always go into the race with the spirit to never give up.

"Of course we couldn't have dreamed of that result."