The FIA admits Formula 1 cars are unlikely to retain as much downforce as its 2021 research suggests, but hopes the new rules will still produce a "very big step".

At the unveiling of new technical, sporting and financial regulations last month, the governing body and F1 chiefs revealed how new aerodynamic rules will target wake performance to improve close racing from 2021.

To help achieve this objective, parts of the car - such as the front wing - will be simplified and 'desensitised', while bargeboards will be eliminated completely and ground-effect will be employed via a long diffuser.

According to the rulemakers, research conducted while creating the new regulations found that current F1 cars only have around 55% of their downforce when running one car length behind another.

When presenting the new regulations, the rulemakers claimed that this number could rise to 86% on a 2021 car, with 94% of the downforce available at three car lengths (compared to 68% at present) and 98% when seven car lengths behind (79% currently).

But these are baseline percentages that represent an estimated current value based on data supplied to the FIA by an F1 team, and a 2021 prediction that does not take into account how teams will interpret the new rules.

FIA head of single seater matters Nikolas Tombazis told Autosport that it is unlikely for the numbers presented last month to completely match reality, but even a reduced gain would be a significant benefit.

"Clearly the teams, when they develop the cars, they don't care at all about whether they make the following car worse," said Tombazis.

"That is not part of their objectives. They just concentrate on getting their cars as quick as possible. So, invariably, some things they do may hurt the following car a bit." 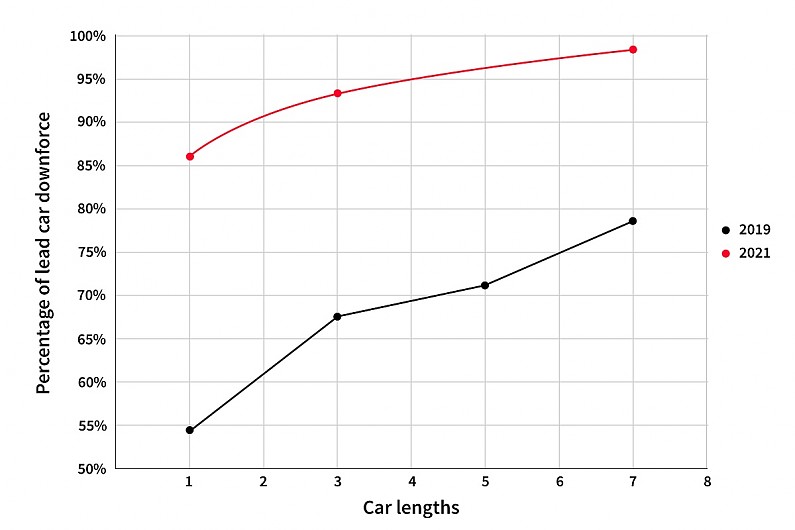 He added: "I would certainly expect that curve to be a bit lower than what it is on that graph (above).

"I'm speculating, it's anybody's guess, but maybe it'll lose a third of the advantage or something like that. But it will still maintain a big chunk."

Tombazis said that another significant factor would be that the highest-performing cars on the grid, for example the Mercedes or the Red Bull, are more sensitive and so are likely losing more downforce when following other cars than the baseline figures in the FIA's research suggests.

He hopes that the "net effect will be a very big step gained, probably not quite as big as what was on that graph", boosted by the FIA's efforts to tailor the rules to help achieve its objectives. 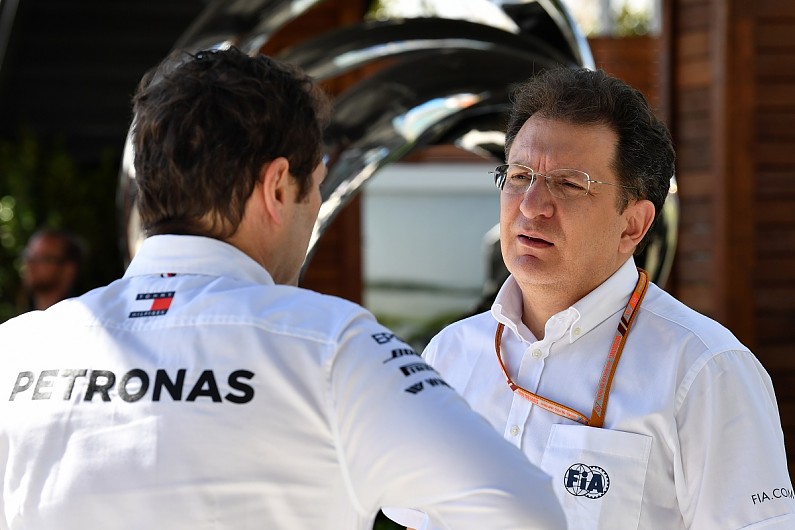 Teams should be less able to control front wheel wake under the new rules, while the return of ground effect is intended to focus development underneath the car, which Tombazis claims would actually help a car that is following.

"We have got a reasonably good view about which areas of the car are more sensitive, and there are some areas of the car where actually solutions that find more performance tend to actually improve the wake," he said.

"So, for example, we've noticed if a car finds more performance on the main diffuser, that by and large improves the wake characteristics.

"Therefore we've been a bit more relaxed about the freedoms in that areas.

"On the other hand the front-wing endplate, the interaction with the wheel, is an area where you can screw up those wake benefits easily. So that area has been more restrictive as a result.

"We've tailored the amount of freedom certain rules give to how sensitive certain areas are to the wake and to the gain."