Lewis Hamilton is "not looking to pull out miracles" as he prepares to clinch a sixth Formula 1 title in the United States Grand Prix after a disappointing qualifying session.

Hamilton only needs to finish eighth Austin to wrap up the championship, but will be champion regardless if Mercedes team-mate Valtteri Bottas fails to win the race.

With three grands prix remaining including Sunday's contest and 78 points up for grabs, Hamilton holds a 74-point lead.
That means Bottas needs to outscore Hamilton by 23 points to delay the Briton's title win.

If Bottas wins, Hamilton must finish eighth to be champion.

Bottas will start the race from pole position, while Hamilton is down in fifth after a qualifying session he described as "one of the worst I've had in a long time".

"I don't look at this race as particularly important," said the five-time world champion.

"There's still two more after this. I approach it the same, not looking to pull out miracles.

"Things happen for a reason and [qualifying] is a lesson learned and I'll try to see if I can turn a negative into a positive." 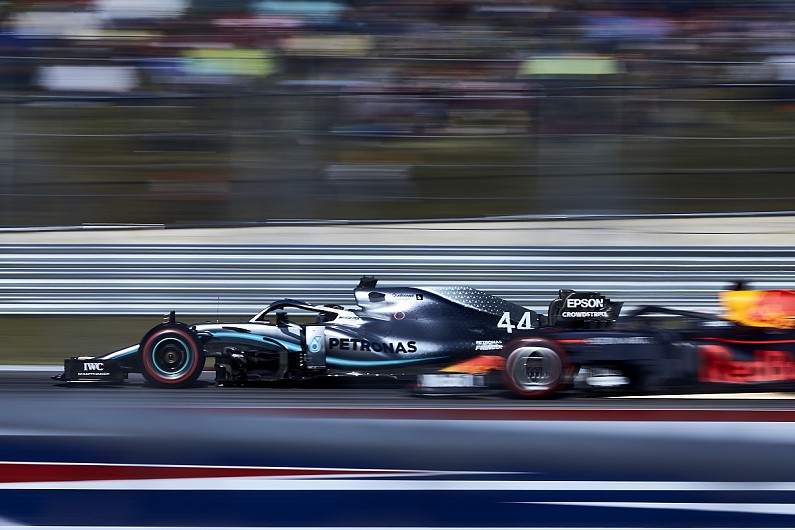 "Not much [went wrong]," said Hamilton. "It just wasn't a good lap. I just didn't have two good laps. Sometimes you just don't get it.

"I was up 7 or 8 tenths on my previous lap. Then it came down to five, back up to six, back down to five.

"So I lost a bunch of time throughout the lap.

"The next one I clipped the kerb at Turn 8 and the lap was done after that."

Hamilton was caught up in a near-miss with Max Verstappen and Daniil Kvyat at the end of the second part of qualifying.

He drew criticism from Verstappen and Kvyat for his role in the incident but Hamilton played down what happened.

"It was just nothing," said Hamilton. "I was trying to keep temperature in my tyres, everyone was going slow.

"So I kept going. There's no rules or regulations saying you have to stay single file.

"I kept going and he started trying to race me. Which was fun..."