Alfa Romeo driver Antonio Giovinazzi has been penalised by the Formula 1 stewards for driving too close to a crane during the Singapore Grand Prix, but keeps his 10th place.

Although a 10-second penalty was added to his race time as a result of the incident, Giovinazzi had finished 17.6s clear of 11th-placed Romain Grosjean.

The incident occurred when a recovery crane was sent on track at the exit of Turn 8 to retrieve George Russell's Williams, which had ended up in the wall following a tangle with Grosjean.

A stewards' statement said: "The race director had instructed all cars to stay to the right at the incident at Turn 8, because of the crane and marshals working the crash at that location. There was a double waved yellow before the incident.

"While the stewards accepted the explanation of the driver that he felt he was going sufficiently slowly, and while he was driving to his SC delta time, he did however end up driving closer to the crane and marshals than was felt safe by either the marshalls on location or the race director. The stewards concur.

"The driver had been told of the location of the incident and to stay right, but may not have considered that the crane was moving.

"The stewards consider this to be a potentially seriously dangerous situation and a risk to the marshals." 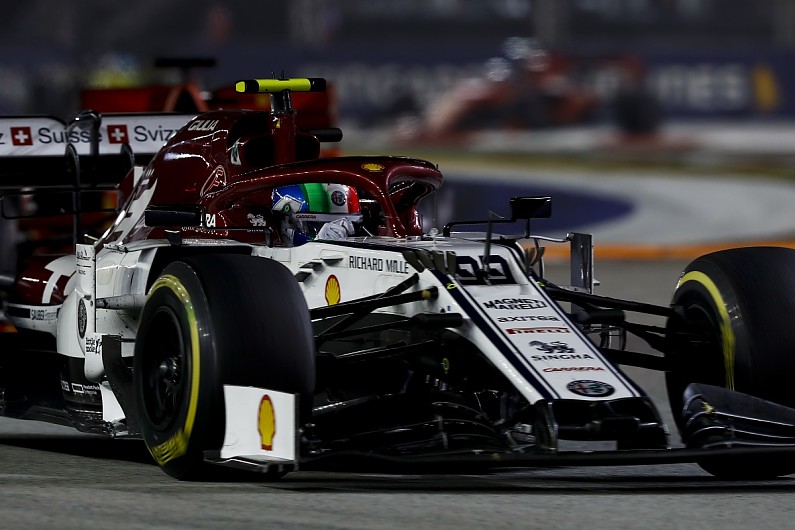 He then lost ground in a clash with Daniel Ricciardo before making his pitstop and falling to 15th, with his fresh tyres then allowing him to charge back to 10th.

"I think we extended the run on mediums [in the first stint] too long and lost a lot of pace in the end," said Giovinazzi.

"Then I had a small touch with Daniel and I broke my front left suspension a little bit so after that it was a difficult race but I think in the end we achieved the best result we could.

"P7 was for sure the main target, being in front of [Lando] Norris. Now we need to look into what we could do better and improve for the next race."

In addition to the Giovinazzi offence, the stewards also looked into the Russell/Grosjean collision and a later crash between Kimi Raikkonen and Daniil Kvyat that ended the Alfa Romeo's race.

They ruled that both tangles were racing incidents for which no sanctions were required.