The Mercedes Formula 1 team feels "annoyance" after it got the Singapore Grand prix weekend "so wrong", according to boss Toto Wolff

Mercedes was viewed as the favourite at the downforce-reliant street circuit, but could only finish fourth and fifth with its two cars - missing out on a podium only for the second time this season.

This was despite points leader Lewis Hamilton starting on the front row and running second initially, before losing out by making his sole pitstop several laps after his rivals.

Hamilton would potentially have fallen further back when he pitted had Mercedes not asked his team-mate Valtteri Bottas to slow his place to create a traffic gap.

Wolff admitted the outcome of the weekend was "disappointing", and felt Mercedes "didn't optimise what we could've optimised".

"I can tell you that we're all angry and we just had a little get-together with the engineers and the drivers and there's a general feeling of 'we got it wrong, we got it so wrong this weekend'," Wolff said.

"The mood that we all feel, and we all felt coming together, is just annoyance, that we just lost too many opportunities. There is nobody in the team that hasn't got that feeling."

While Wolff felt the most damage to Mercedes' aspirations had been done in qualifying, as "that is what is most decisive in Singapore", he also acknowledged that the team had underestimated the undercut when it left Hamilton out for a longer first stint. 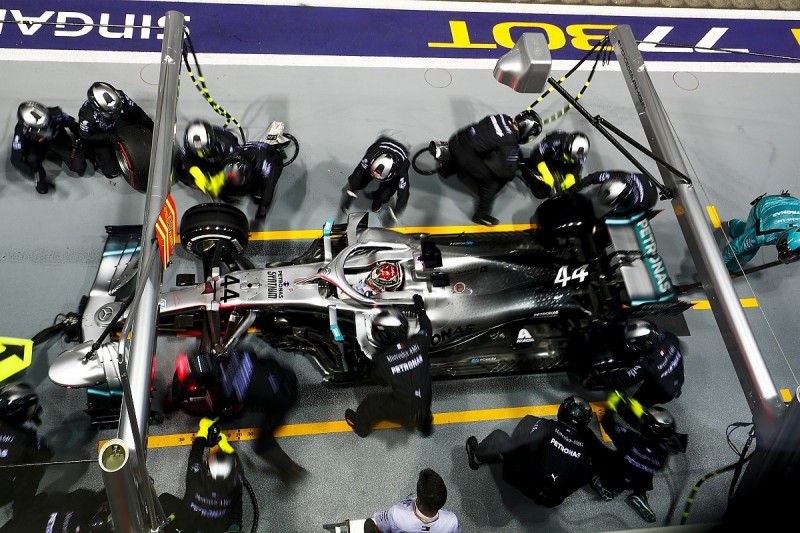 "We missed the opportunity of the undercut that maybe even surprised Ferrari, how powerful it was," Wolff explained.

"And from then on it was about protecting the position against Max [Verstappen] or going for the win, which was maybe probably a small percentage - but we took the risk of sacrificing third, with the support of Valtteri obviously in that situation.

"It was a bit of a gamble, and you could see that probably Ferrari had a different end [to the race] in the mind as well.

"Would we have pitted him [Hamilton] earlier? No. At that stage we lost P1 and P2, it was about protecting P3 against Max, we felt that the tyre had more, it was our only chance to overcut and there was this big gaggle around Lance [Stroll] and [Antonio] Giovinazzi, and the Ferraris were catching up quickly, so we would've hoped that it would've stopped the Ferrari train.

"But as a matter of fact then Lewis' times dropped below the Giovinazzi times, out of nowhere, and this is when it was game over for us."