Mercedes has not raced with its controversial wheel spacer design for the past few Formula 1 races, but it has not stopped developing the idea as the latest updates used in Brazil show.

The spacer works in conjunction with the rear wheel to regulate tyre temperatures, but since the US GP the team has elected not to use it in an attempt to avoid any risk of a protest from Ferrari, which has questioned the legality of the design.

But despite the political background behind its decision to not race the concept, and speculation over what impact this has had on the performance of the Mercedes cars, the team has continued to test and improve the solution during Friday's free practice sessions.

As the above drawings show, changes were made to the wheel centre ridges at Interlagos to alter the flow characteristics around the holes that line the inner face.

This is not only helping the team to collect data for the design's potential use in 2019 but could also be seen as a method of misdirection.

With the world championships now settled, and ongoing debate about the design's legality despite the FIA being happy with the idea, it may be that Mercedes goes ahead and races with the spacers in the season-closing Abu Dhabi Grand Prix.

Then it will be up to Ferrari or another rival team to decide whether to let the issue go or lodge a protest to try to prove that Mercedes is benefiting from the kind of aerodynamic advantage that a similar system used by Red Bull in 2012 had and was banned.

Much like the Mercedes system, the Red Bull design relied on compliance from wheel rim designer O.Z, leading to a design that would utilise the interaction of the brake assembly, stub axle and wheel rim in order to provide a conduit for air to flow between the two.

The main difference is that the sole purpose of the Red Bull design (below, right) was aerodynamic, paving the way for the static blown axles that have become fashionable since - whereas the Mercedes idea is predominantly used for cooling. 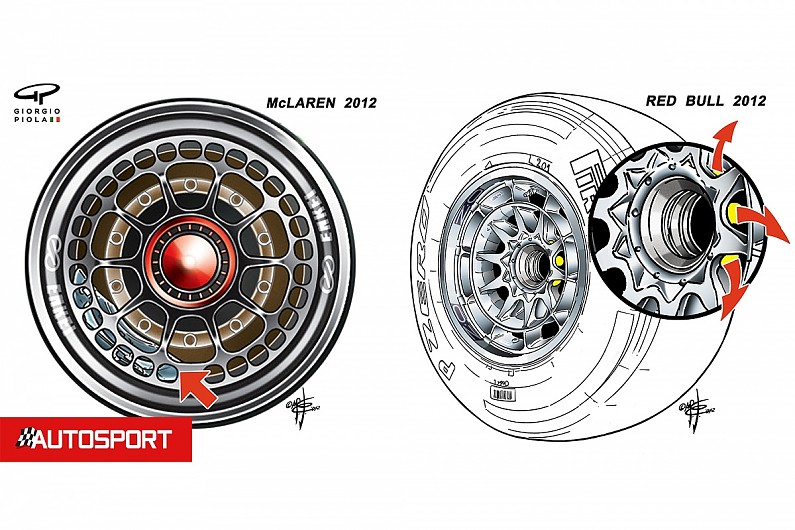 McLaren also worked closely with wheel rim supplier Enkei in 2012 to leverage a cooling benefit, as large holes were drilled in the surface between the spokes and outer rim (above, left).

It was a solution that was not as complex as the close-channel effect we've seen at Red Bull and Mercedes, but it shares some similarities with Mercedes in that it was also run at the rear of the car and that its aim was bridging a thermal relationship between the brakes, wheel rim and tyres.

Mercedes has also been addressing the design of its halo fairing over the course of the season, as it looks to improve the flow of air around the safety device.

Teams are allowed to modify the standard titanium structure with up to 20mm of bodywork.

It was obvious this freedom would be used to create aerodynamic structures that not only improved flow around the structure but also onward to other areas of the car.

Up until testing the winged version in Singapore, and then finally racing it in Mexico, Mercedes had been one of only two teams (the other being Red Bull) which had utilised a streamlined version of the fairing. 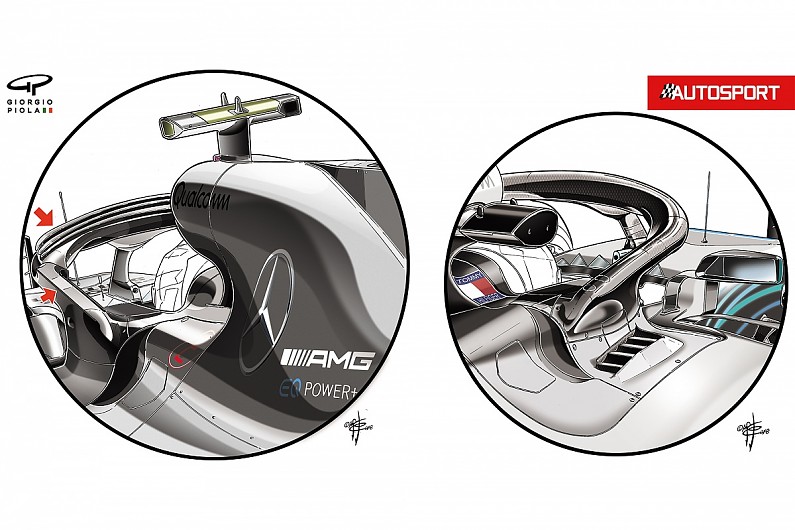 However, there were changes to the fairing before that, with flank stands appearing in Germany (bottom arrow) which have been changed subtly since and alter the behaviour of the airflow that passes by.

While the number of winglets differs up and down the grid, Mercedes opted for a triple-element winglet arrangement atop its halo (top arrow), maintaining the use of the flank stands too, to control the tip vortices from the added wing.