Pierre Gasly says he was backed up by Formula 1 champions Lewis Hamilton and Sebastian Vettel when his British Grand Prix penalty came up in the drivers' briefing at Hockenheim.

Gasly was fuming after what he felt was a "completely ridiculous" sanction cost him the championship point he'd earned at Silverstone.

The Frenchman passed Force India's Sergio Perez late on, but made contact with his rival's car in the process and was hit with a five-second penalty that demoted him from 10th to 13th.

Speaking to the media at the next grand prix weekend in Germany, Gasly said he brought up the penalty to race director Charlie Whiting during the Friday drivers' briefing - and insisted that "everyone" among his fellow F1 drivers supported his viewpoint.

"I asked Charlie and I just wanted his opinion about it, and the drivers' opinions," Gasly said. "We talked about it for 40 minutes.

"Lewis said it was a racing incident, Seb said as well. Everyone found that the penalty was a bit harsh.

"So, it was good to know after, there is nothing we can change really. For me it was just to understand. 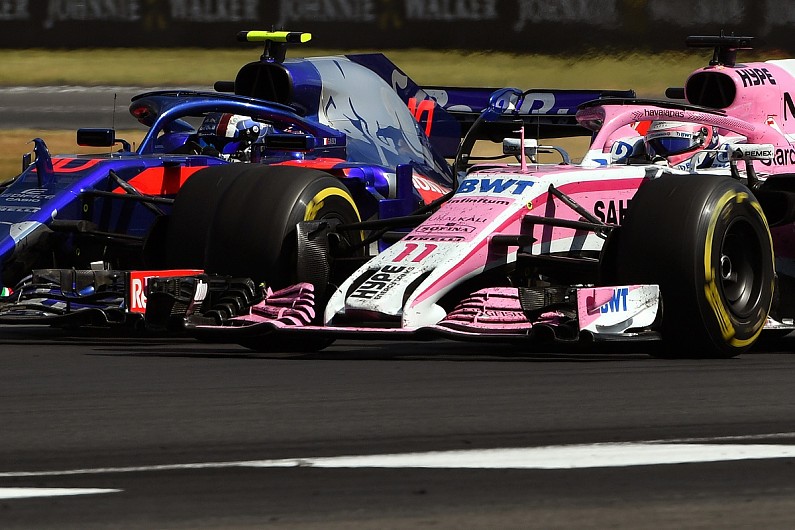 "I am open to question myself about my vision of racing and it was important for me to get the opinions of others as well, but they all shared the same feedback and they thought the penalty was too harsh."

Gasly suggested F1 should consider the example of MotoGP, which has been more relaxed in policing wheel-to-wheel action.

The motorcycle series announced earlier this year that its stewards would be imposing harsher penalties in the aftermath of reigning champion Marc Marquez knocking title rival Valentino Rossi off his bike in Argentina.

But despite a number of contentious moments in the following races, no penalties for contact have been handed out in MotoGP since the announcement.

"I am a big fan of MotoGP and this kind of thing happens every weekend," Gasly said.

"And this is why people love MotoGP - because they are touching, they are really fighting to the limit and when we see Valentino and Marquez clashing side-by-side, everyone loves it.

"It is part of racing and I think people are quite excited to see when it happens in F1."

The Frenchman reiterated that he sought a more consistent approach to F1 stewarding, having felt after Britain that manoeuvres similar to his Perez move had gone unpunished in the past.

"It is not only for my case, just to have something clear for everyone," he said.

"Just to know where the line is exactly, because from one weekend to another it seems to change a bit.

"It is important to have some clear feedback on what the limit is."