Morris Nunn, who ran his underdog Ensign Formula 1 team for a decade before finding huge success as an engineer in Indycar racing, has died at the age of 79.

Known to everyone in the sport as 'Mo,' he ran some of the greatest drivers of the past 40 years, including Chris Amon, Jacky Ickx, Clay Regazzoni, Mario Andretti, Emerson Fittipaldi, Alex Zanardi and Juan Pablo Montoya. Quietly spoken and noted for his down-to-earth approach, Nunn was admired and respected by all who worked with him.

Nunn had three careers in motor racing. He started as a driver, and proved himself to be a solid talent in F3 before accepting that he wasn't going to make it in F1. He chose instead to become a constructor, initially in F3 before making the leap to grand prix racing in 1973.

He kept his little Ensign team alive for decade, usually fighting against the financial odds. However, unlike contemporary Frank Williams he never managed to put all the pieces together to create a winning package.

He then re-invented himself in America, quickly becoming one of the most successful and sought after engineers of the era, and a specialist at setting cars up for ovals.

Born in Walsall in 1938, Nunn had raced motorcycles when in 1962 he visited the West Bromwich showroom run by sometime F1 driver Chris Ashmore and his brother Gerry. He left as the owner of a Cooper-Climax F2 car, which he had purchased for £850. He subsequently competed in the first car race he ever attended, at Silverstone. He raced the Cooper sporadically into 1963, before buying a Lotus 23B sportscar, with which he began to find some success. 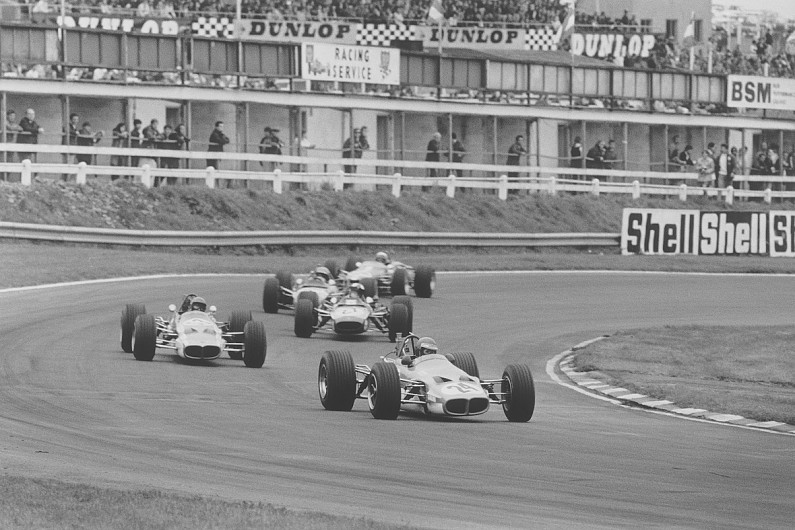 By 1966 he had proved to be a frontrunner in F3 with his own Lotus 41, and in 1969 (pictured above, chasing Ronnie Peterson at Brands Hatch) was hired to by Colin Chapman to drive a works Gold Leaf entry. A brief foray with an F5000 Lola in early 1970 ended in a split with the team. With no drive and no backing available Nunn accepted that he had a limited future as a driver. At the age of 31 he decided instead to be a constructor.

He knew F3 well so he decided to start there, using his savings to buy the materials to build his first car in his garage, christening it the Ensign. In the hands of Bev Bond it achieved some success in 1971, and Nunn soon found customers for his products.

A conversation with one of them, the wealthy Rikky von Opel, led to the momentous decision to build an F1 car for 1973. It didn't achieve very much, but Nunn was on his way as an F1 entrant and constructor. With Teddy Yip's Theodore backing he ran Vern Schuppan in 1974, while Dutch sponsorship put Gijs van Lennep in the car in 1975. 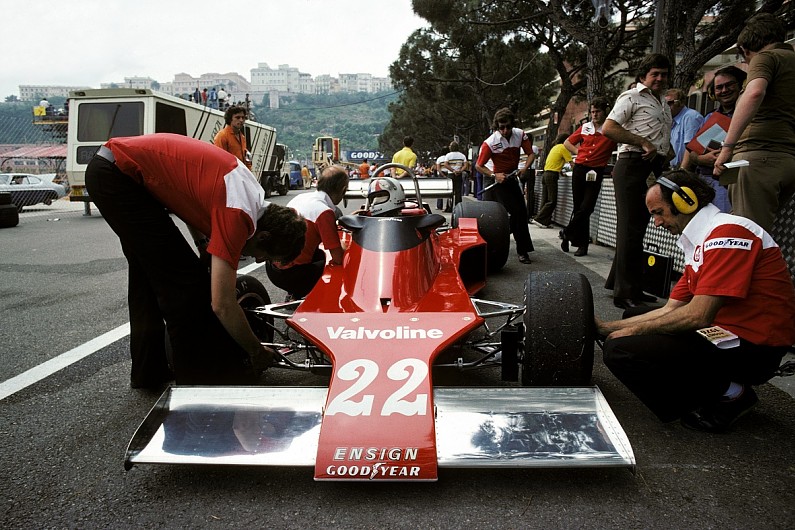 Money was always short but Nunn showed he had ambition by hiring Chris Amon for a couple of races in 1975. That relationship extended into 1976, and the Kiwi put in some sterling performances - qualifying third in Anderstorp and sixth at Brands Hatch - before opting for retirement. He was replaced by Jacky Ickx and then, in 1977, by Clay Regazzoni. The latter made the top six several times that year, as did newcomer Patrick Tambay in a sister Theodore-backed car.

Nunn gave chances to youngsters Derek Daly and Nelson Piquet in 1978, the Irishman then struggling through '79 with an uncompetitive ground effect car.

For 1980 Nunn attracted major backing from Unipart, and reuniting with Regazzoni it appeared that Ensign's fortunes had turned. However the Swiss veteran's huge accident at Long Beach was a major blow, and Unipart left at the end of the year. Running on a shoestring once more Marc Surer then scored what would be Ensign's best result with fourth and fastest lap in a wet Brazilian GP in 1981. 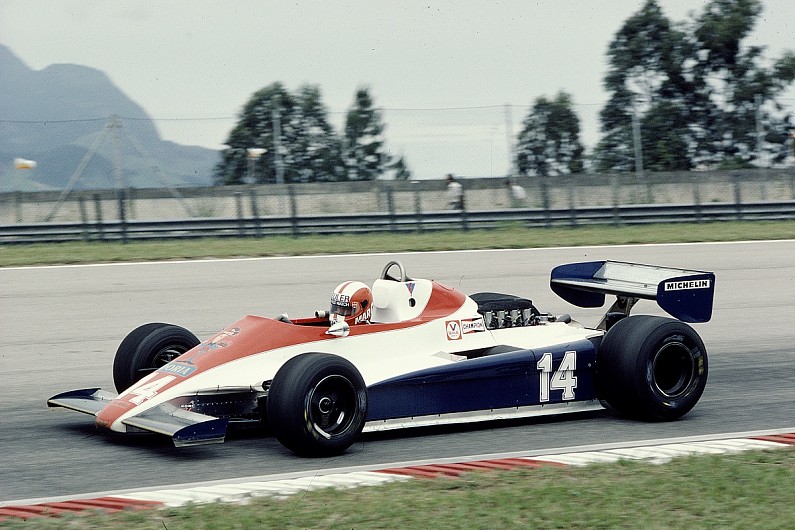 After one more year under the Ensign name in 1982 with Roberto Guerrero, Nunn sold his assets long-time friend and backer Yip.

Seeing no future in F1, he subsequently headed to the USA, initially working with Guerrero and the Bignotti-Cotter team. Without the pressure to find funds or build cars, and focusing solely on engineering, he would finally find the sort of success that eluded him in Europe.

After a spell with Newman-Haas and Mario Andretti he joined Pat Patrick, helping Emerson Fittipaldi to an Indy 500 victory and the CART title in 1989. He then joined Chip Ganassi as technical director, winning the 1996 title with Jimmy Vasser before enjoying two extraordinarily successful title-winning seasons with Alex Zanardi, with whom he had a special bond. 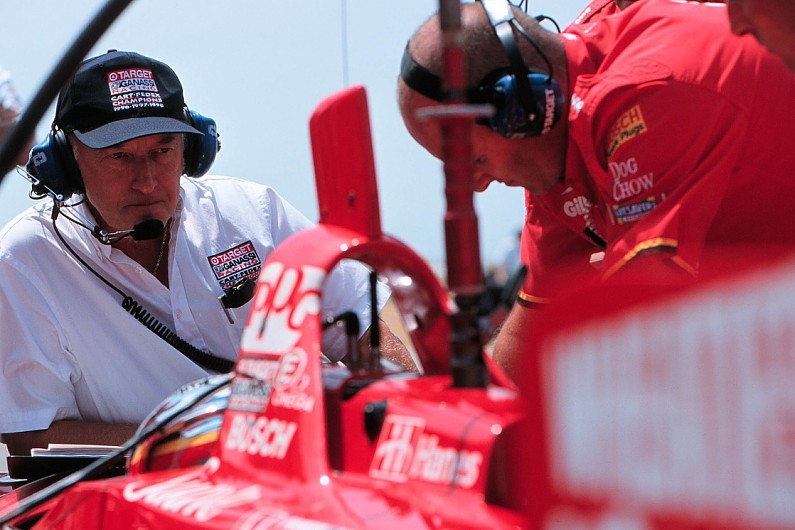 When the Italian left to join Williams, Nunn persuaded Ganassi to take Juan Pablo Montoya for 1999, and the team duly won a fourth straight championship with the mercurial Colombian.

For the 2000 season and with the backing of Mercedes Nunn set up his own CART team at a base in Indianapolis, and found himself in overall charge for the first time since 1982. Initially he ran one car for Tony Kanaan (pictured below), before he was reunited with Zanardi the following year - only for the Italian to be gravely injured at Lausitzring.

As a team boss Nunn had some solid results and won a couple of IRL races, but he never enjoyed the sort of success he had as an engineer. Following a final full season with former Tyrrell F1 driver Tora Takagi in 2004, and a joint venture with Adrian Fernandez at Indy in 2005, he decided to call it a day. In September that year he auctioned off the team's entire inventory, but he remained in touch with the sport as technical advisor to Ganassi. 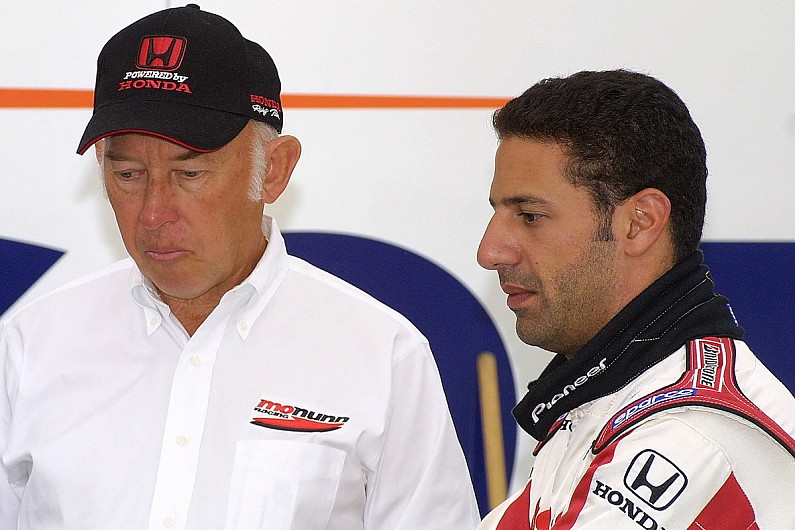