Formula 1 grands prix will still not be "flat-out" racing in 2017 despite Pirelli shifting towards lower-degradation tyres, reckons Renault's Nico Hulkenberg.

After previously being instructed to provide F1 tyres that degraded rapidly, Pirelli was tasked with producing longer-lasting rubber for the new 2017 rules - following years of driver complaints about having to nurse tyres during races.

But when asked by Autosport if drivers will be able to push more in 2017, Hulkenberg replied: "Perhaps. I think still you can't go flat-out all the way or you'll pay a price along the way."

Hulkenberg said the previous high-degradation Pirellis had forced him into such a different approach that using low-degradation Michelins when he made his World Endurance Championship cameo with the Porsche LMP1 team in 2015 was a culture shock.

"I was surprised - when I started testing the Porsche, and the first race at Spa and so on, I had to learn it," said the German, who won the Le Mans 24 Hours during his WEC stint.

"If you slide them and be a bit too aggressive, you go backwards at some point.

"But that wasn't the case in the LMP car.

"The surprising thing I learnt is that you could keep it there [on the limit] all the time, it wouldn't go away from you. It's quite a different ballgame." 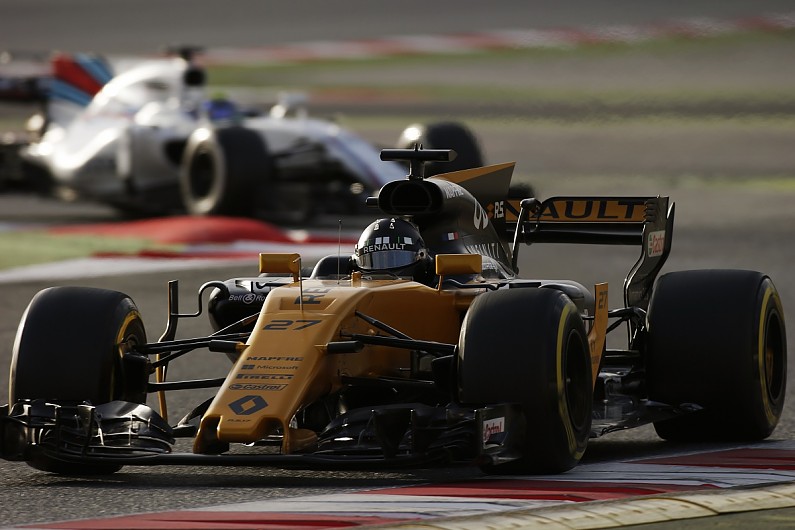 Hulkenberg has moved from the Force India team that finished fourth in the 2016 constructors' standings to the works Renault operation that ended last year four places further back.

His team-mate Jolyon Palmer believes Renault has made sufficient progress to be in the pack chasing fourth in 2017, a group he reckons is currently led by Williams.

"I would say Williams is fourth, and then there is a mass of cars behind that in the midfield," said Palmer.

"We expect to be in there. But we don't know if we're the fifth best team or the eighth best team.

"It will be really tight, and Williams isn't out of reach.

"They've made progress [at Renault], but I would say we've got the third-best engine.

"Hopefully the gap is closing all of the time. And then the chassis, we can compare with where Red Bull are and they're ahead of us still.

"We've still got more to come in both areas, and we've made improvements on last year.

"It's the first year in the cycle of the car, so we're finding things in the windtunnel and at the factory all the time.

"[Development] will be big, and we've got quite good resources - so even if we start in the midfield hopefully through the year we can move to be a solid top five or four."