Pirelli has announced the tyre choices made by the 22 Formula 1 drivers for the season-opening Australian Grand Prix.

As Pirelli racing director Mario Isola expected, a variety of options have been declared, not least by Mercedes duo Lewis Hamilton and Nico Rosberg.

With 13 sets of dry-weather tyres available over a race weekend, drivers now have three compounds to choose from, rather than in the previous seasons when two were selected by Pirelli.

It means there is scope for differing selections not just across all 11 teams, but also within each team, as highlighted by Hamilton and Rosberg.

Only at two other teams - Sauber and Haas - have the drivers within each chosen a different line-up of tyres.

Williams, Red Bull, Renault, Toro Rosso, McLaren and Haas have gone with seven sets of the super-soft, while Mercedes and Ferrari have gone for six, underlining there will be different strategies at work over the course of the weekend. 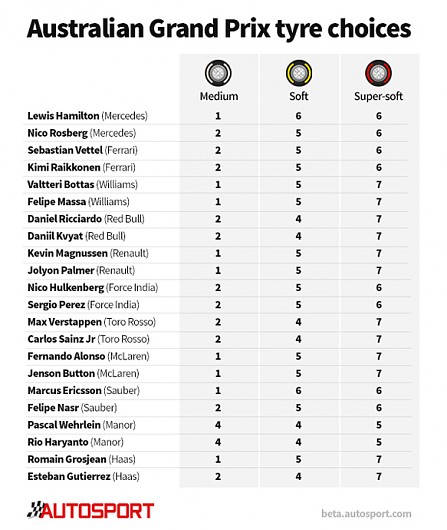