Ferrari brought the Kimi Raikkonen contract saga to an end this week by announcing the Finn as part of its 2016 Formula 1 driver line-up, but was that the right decision?

Both Raikkonen and team principal Maurizio Arrivabene have fielded questions (and slammed speculation) on the subject for the majority of the season, but after this weekend's Belgian Grand Prix everyone will be able to move on from talking about it.

Ferrari has opted for consistency going into next year rather than replacing Raikkonen with someone younger. IAN PARKES and BEN ANDERSON debate if that was the right thing to do.

Raikkonen may be 36 in October, out-qualified by his Ferrari team-mates 24-5 since his return at the start of last year and out-raced 20-3, but you can understand Maurizio Arrivabene's decision to retain the Finn for 2016.

There were specific reasons as to why Raikkonen languished behind Fernando Alonso so often last year as the F14 T struggled in many areas and was almost the complete opposite in the way he likes a car to handle.

With those faults addressed over the winter, and with the hiring of a team-mate in Sebastian Vettel he is close to and has considerable respect for, Raikkonen has been a far happier man this year.

Raikkonen wants to end his career at Ferrari

The results, however, have betrayed him as Vettel has enjoyed seven trips to the podium, including two wins, compared to Raikkonen's one second place.

There have been mistakes in qualifying, highlighted by the team, that have undermined Raikkonen's grid position, and ultimately his finishing spot.

Arrivabene has long made clear, though, the key to Raikkonen's future was in his own hands, and as long as he showed sufficient appetite and desire, a new deal was his for the taking.

Now in the Indian summer of his career, by his own admission Raikkonen is more content than he has ever been, the initial key ingredient to extracting the best from him.

Technical director James Allison has also stated in terms of speed there is nothing to separate Vettel and Raikkonen, with only those little errors letting him down.

So you have a fast, happy, and a clearly still hungry Raikkonen, and in terms of box office, he continues to remain one of the top attractions in the business.

One can only assume in assessing the competition for the seat - Valtteri Bottas, Nico Hulkenberg and Daniel Ricciardo - there was no-one to compare to Raikkonen at present when you take the aforementioned characteristics into consideration.

In that respect, Ferrari has done exactly the right thing in holding on to him for one more season. 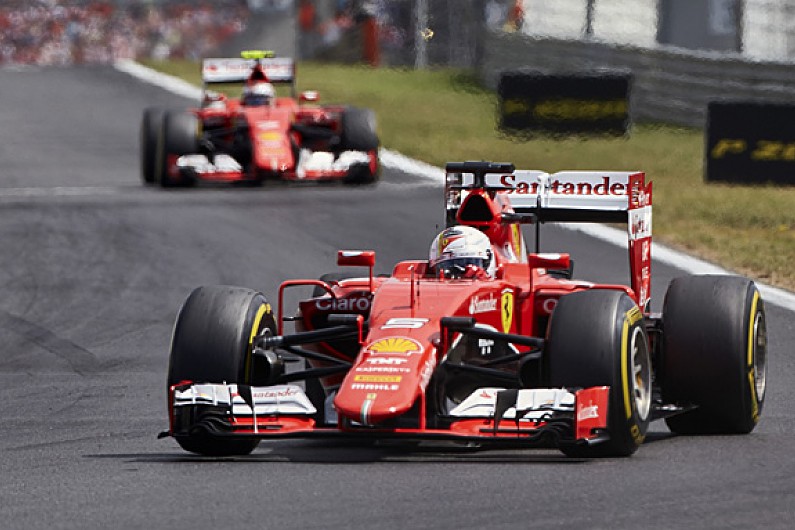 NO - This is a results business
Ben Anderson, Grand Prix editor, (@BenAndersonAuto)

Ferrari's decision to retain Kimi Raikkonen makes some sense, but from a pure results perspective it is overwhelmingly the wrong one.

Setting the limitations of last year's woeful F14 T aside, the Finn was still totally trounced by team-mate Fernando Alonso in the first season of his Maranello comeback.

Alonso dominated Raikkonen in qualifying (16-3) and Raikkonen accumulated less than 35 per cent of the Spaniard's points total across 19 races.

Things have improved marginally this season, but Raikkonen has still scored less than 50 per cent of Sebastian Vettel's points across the first 10 races of 2015.

True, Raikkonen has been unlucky in a few races this campaign, but he has also made his own life difficult with a succession of errors - particularly in qualifying.

In a tighter constructors' championship fight than Ferrari currently finds itself in, Raikkonen would potentially represent an expensive liability.

He is no longer the super-fast qualifier that lit up F1 with McLaren in the previous decade - insiders at Lotus calculated he was 0.3s a lap slower than Romain Grosjean over a single-lap during their two recent seasons together - and prime Ferrari target Valtteri Bottas is one point better off than Raikkonen in this year's title race,
despite driving a slower car and missing the first race of the season through back injury.

Don't get me wrong, Raikkonen is still a fine driver, but he is not currently the best one available to what stands as the second best team in F1.

So it seems Ferrari has weighted Raikkonen's underperformance against the bad luck he's encountered this year, his marketing pull as a one of only five world champions on the current grid, and the harmony he brings to the team through a productive working relationship with Vettel.

It has decided the pros outweigh what represents a significant con in the grand scheme of things - results.

But this won't be the end of the matter. Next year will surely represent Raikkonen's farewell tour before Ferrari signs his replacement.

Frontrunner Bottas is free to leave Williams at the end of 2016, which is perhaps another reason why Ferrari has stuck rather than twisted.

Williams would thus be wise to strike a fresh deal with its star asset before the next 'silly season' comes around.