Lewis Hamilton topped the first Formula 1 free practice session at the Hungarian Grand Prix, which was interrupted by a dramatic roll for Sergio Perez after hitting the barriers.

Hamilton's Mercedes was fastest in the first half-hour, when all drivers were on their first set of medium-compound Pirellis, and he had yet to use his second set when Perez crashed shortly before the one-hour mark.

The Force India driver had just emerged from the exit of the Turn 11 right-hander and was on the exit rumble strip when the rear snapped on him and pitched the Mexican into a spin.

Replays suggested that this was caused by a failure in the right-rear suspension, although this has yet to be confirmed.

Perez spun across the track and hit nose-first into the barrier, damaging the front-right suspension.

As he rebounded into the track, the deranged front wheel folded under the car and tipped him into a roll.

The Force India came to rest upside down, although Perez was able to get out quickly and was taken to the medical centre for a check-up before he returned to the pits on foot just over 10 minutes after the crash.

There, he was met by a pack of TV and radio crews - although he was still unsure as to the cause of the accident when it was put to him that he had a failure.

"It was a really bad accident, really unlucky," he told Sky Sports F1.

"I went in at the wrong angle, which made the car roll over, but everything's all right.

"It was a bit of a strange accident, I thought I was under control but I guess the Astroturf was very dirty and that's why I went into the wall, but we have to check everything in detail." 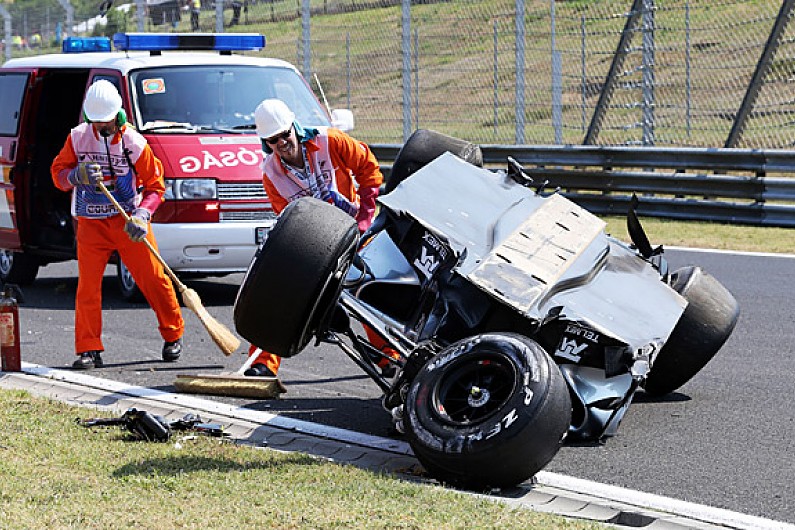 The session was restarted after a 15-minute halt, and after the stoppage Nico Rosberg worked his way down to a 1m25.250s, which was just under half-a-tenth faster than Hamilton's early mark.

But at the same time, Hamilton improved to a 1m25.141s to end the session 0.109s faster than Rosberg to consolidate top spot.

The session was then interrupted by another red flag for debris on the track from the front wing of Kimi Raikkonen's Ferrari, which failed as he was exiting the Turn 12 right-hander.

Although the Finn made it back to the pits, the track needed clearing and the session did not get back underway in time for any more improvements to be made, meaning only five drivers left the pits for the last 60 seconds of track time.

Raikkonen set third-fastest time before his incident, putting him ahead of the two Red Bulls of Daniels Ricciardo and Daniil Kvyat.

They were the only three non-Mercedes cars within a second of the pace, as sixth-quickest Sebastian Vettel, who missed much of the first half-hour with an electrical problem, was 1.254s down.

They sandwiched Perez and the Williams of Valtteri Bottas on the timesheets.

McLaren suggested that its hopes of a slightly improved performance at a less-power-dependent circuit are justified with Fernando Alonso and Jenson Button 11th and 12th fastest.

The team got its tyres this morning, but while both cars completed an installation lap during the first half-hour running was restricted, with Pastor Maldonado and Jolyon Palmer - two of the drivers who did return to the track during the final one-minute mini-session - managed only 13 laps between them.

That meant Maldonado ended up 17th, while Palmer - who only did four laps - did not set a time.

The Swiss driver took over Roberto Merhi's Manor and lapped 1.1s off the pace of team-mate Will Stevens.