The team has attached a large aerodynamically-profiled 'blocker' to each of the rearmost suspension links.

This concept is designed both to give more downforce at low speed and reduce drag at high speed.

These blockers must be part of the suspension itself, but there is a very fine line between an independent shroud, which would be illegal, and something that is all one part and I'm sure that McLaren has ensured it complies with the rules.

This appears to meet all requirements of the regulations in terms of location and structure.

These aerodynamically-profiled parts act as devices to block the airflow coming out of the Coke bottle area when it gets to the back of the diffuser.

It creates an area of low pressure behind these blockers and this then increases the velocity of the airflow travelling underneath the car, generating more downforce from the underfloor.

The rear beam wing previously did this job, but the 2014 regulations have banned that so teams are looking for new ways to make up for it.

The interesting thing about this package is that when the car is at higher ride height, these sections will almost completely close the gap at the top of the diffuser, helping it to work at low speed.

At higher speed, because of suspension deflection, a gap will open up between the bottom of the lower blocker and the diffuser, which will reduce drag.

So this makes it a double whammy, giving you more downforce under braking and in slower corners and less drag at high speed.

This could be McLaren's secret weapon because, if it does work, it is not something that can be copied in five minutes as it is dependent on a number of design parameters at the rear of the car. 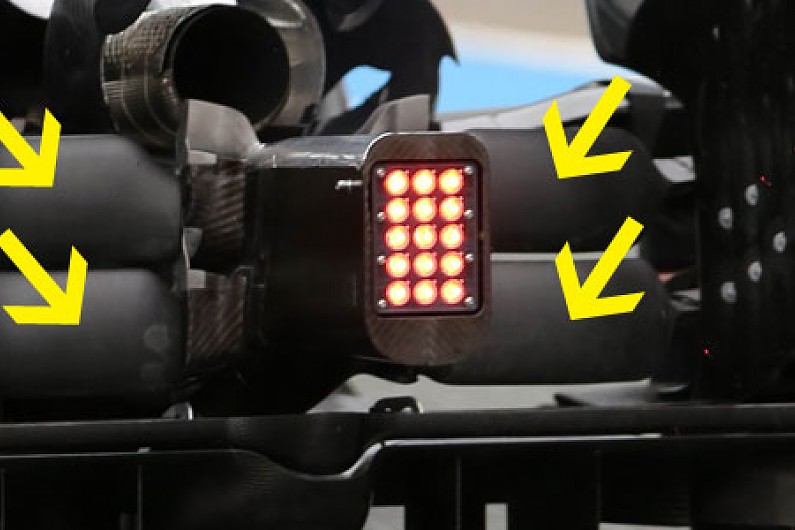