Overnight rain had prompted that decision, but it had little material effect on running plans as teams clocked up 99 collective laps - already six more than they managed over the entirety of a stunted day one.

McLaren, which had not appeared at all on Tuesday, was first out the blocks on the second morning, although it was still some time before Button registered his first timed laps of 2014.

Instead it fell to Esteban Gutierrez, Kimi Raikkonen and Valtteri Bottas to set the early pace on a rapidly trying track.

Gutierrez, the day's busiest man with 33 laps under his belt, put Sauber on top early on, before being demoted by Raikkonen's Ferrari.

The Mexican also brought about the session's only red flag when he spun into the gravel at Turn 5, narrowly avoiding the outside tyre wall.

Raikkonen and Bottas, in his second day with Williams's new FW36, traded blows at the head of the timesheets, with the latter eventually appearing on top courtesy of the first lap of the day in the 1m37s.

That stood until Button headed out for a five-lap run that included two new overall bests, quickest of which was a 1m36.094s.

Bottas stayed second, fractions ahead of Raikkonen, who was in turn less than one second ahead of the Force India of Sergio Perez.

Gutierrez rounded out the top five, and was the last of the drivers to complete a flying lap.

Sebastian Vettel and Nico Rosberg (pictured) emerged for Red Bull and Mercedes respectively, but neither set a time over the course of their five exploratory laps. 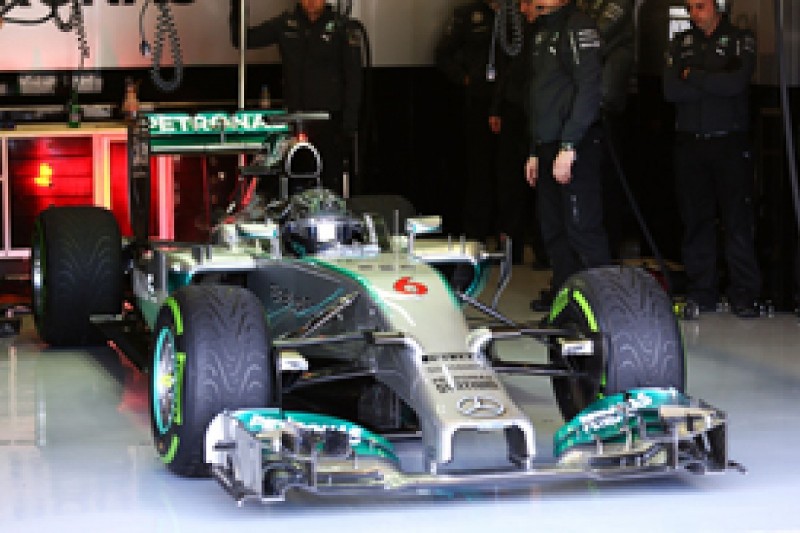 Mercedes' first day had started brightly, only to be ended prematurely when a front wing failure sent Lewis Hamilton crashing into the Turn 1 tyre wall and left the team scrambling for an overnight solution.

Caterham and Toro Rosso meanwhile did not run at all.

The latter squad managed 15 laps on day one, but has not run since Jean-Eric Vergne hit problems on Tuesday afternoon.

The team's new recruit and F1 rookie Daniil Kvyat is therefore still waiting to take part in his first official session as an F1 driver.

Marussia meanwhile confirmed that its car is en route to the Spanish track, but the team is not expected to run before Thursday.