Kobayashi's aggressive style made him a fan favourite during his first F1 stint with Toyota and Sauber in 2009-12.

He is now returning to grand prix racing with Caterham after a season competing in Ferrari's World Endurance Championship GT programme.

"In Kamui we have someone with a lot of experience," said Fernandes.

"He is an exciting driver and brings a lot of energy to the team.

"Bringing in Kamui gives the team a bit of adrenaline."

"Yesterday I won an award in Dublin and after I got it I was surrounded by Japanese leasing companies and banks who all seemed to know, excited that Kamui is back in," he said.

"It is a nice thing to see people so committed for someone, it's not something you see that often in this part of the world."

Kobayashi is half of an all-new driver line-up for Caterham, with Marcus Ericsson graduating from GP2 as his team-mate. 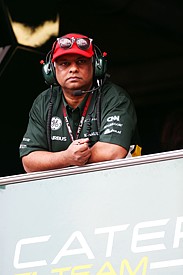 Fernandes said he felt it was the right time for bold moves, with Caterham yet to score a point after four seasons in F1.

"It's no good going around the world and coming last," he said.

"It is not fun for anyone in this team either.

"We have done extremely well on the business side, we don't need to be world champions to sell a lot of cars but it's no fun being at the back, so it's important we make a change.

"That is what drove some of our decision-making process."