Flexible front wings; the one single thing that most F1 teams think is key to Red Bull's current aerodynamic advantage. But there's a little bit more to it than that.

The key to creating overall car downforce is to manage the way air separates around the front wing. This component is the first to influence the air flow and if this is badly managed, the rest of the car will suffer. This becomes easier the closer the wing runs to the track surface as it is basically running in what is called 'ground effect.'

Of course, the FIA mandates a minimum wing height relative to the underneath of the chassis and it also applies a load versus deflection test to eliminate any serious deflection. But if a team can make its wing flex as much is permitted when subjected to the kind of aerodynamic load that speed creates, it can make the wing sit lower and therefore manage the air separation more efficiently. This is what helps you create that extra downforce.

What Red Bull has done better than anybody else is to stop this process adversely affecting the rest of the car, and in particular, the outboard area in front of the front tyres.

If you don't manage the airflow separation in this area, the downforce becomes inconsistent and if your front wing is 'ridged' this causes the complete car to bounce up and down.

As the wing gets lower to the ground, the airflow separates and the downforce is reduced. The car rises up, the wing re-attaches, and more downforce is created, which sucks the car back towards the ground. This phenomenon is called 'porpoising', and the McLaren has been quite noticeable in doing this during 2010 and 2011.

If you say that aerodynamics determines 90 per cent of a car's performance, then the front wing is 60 or 70 per cent of the 90, and that's because it's the part that hits the air first and dictates how it flows over the rest of the car.

If your front wing creates a turbulent wake or poor vortex generation, then every component you develop downstream of the front wing is optimised to work in that environment.

However, if the wake is good, then the downstream aerodynamic surfaces can be made to work harder and the complete package will than create more overall downforce.

Development of any racing car starts at the front and sweeps through to the rear; change the front wing configuration and you might not see any improvement until you optimise the rest of the car around it and that is why there is no quick remedy if a team is off the pace.

Red Bull has optimised carbon fibre technology by a very clever means. Carbon fibre is a bit like rope, the more load you want it to withstand, the thicker the piece you use. Carbon fibre comes in many forms and can be layered up any way you want. Lay it out in straight lines, and it's tremendously strong in terms of tension; lay it out at an angle to the load path, and, despite it being the same strength, it will flex under a given load. 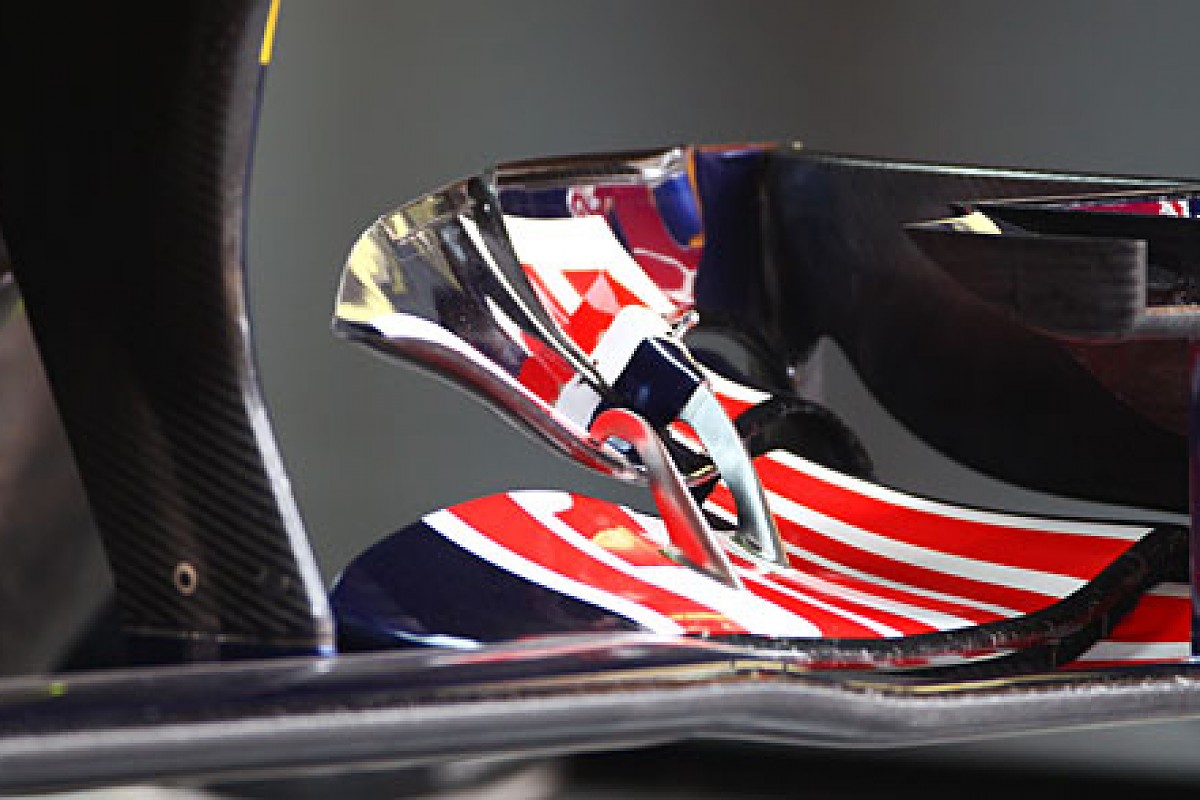 Getting the lay-up just right to allow you to pass the FIA load to deflection test, but yet still increase the deflection as the load increases with speed is no easy task. But it is possible and that is why the teams employ high-priced boffins to come up with solutions to this type of problem.

It's not something that's exclusive to Red Bull either; everybody's wings flex, it's just to what extent that they flex that is the bone of contention here.

If you studied a photo of a Red Bull or another car side by side in China, you'd see that the front wing of the Red Bull appeared to be much closer to the ground. While rivals say that this was as a result of excessive flexing, Red Bull argues that this is down to the rake of the car, i.e. that the RB7 has approximately the same front ride height as everyone else, but that the rear of the car is run much higher in order to maximise aero efficiency, thus creating a rake shape. This means that the front wing looks lower to the ground as it is ahead of the front axle.

The rake itself is fundamental to a car's aerodynamic specification. With a car that's higher at the rear, the aerodynamic centre of pressure can be further forward at lower speeds, which will help reduce low-speed understeer. As the car speeds up, the rear will lower itself and if the diffuser works correctly then the centre of pressure will move rearward, making the car more stable in fast corners.

The optimum rake will vary from circuit to circuit, but in my experience, by having a rake change ratio of less than 3:1 (in other words, if the front suspension compresses around 10mm, the rear should compress around 30mm), then the car will not perform as well as it potentially could and you could only counter-act that by running your car stiffer and sacrificing a bit of mechanical grip and suspension compliance.

Considering that the wheelbase is around the three-metre mark and that the front wing leading edge is about one meter in front of the front wheel centre line, this means the front wing of the Red Bull will start life about 8mm lower than the McLaren.

As the principle outlined suggest, this will create more front downforce at low speed.

If a Red Bull is running a 3:1 stiffness ratio and a McLaren - because of its lower rear ride height - is running a 2:1 stiffness ratio, then at high speed the front wing will end up at approximately more or less the same height. Other than that, Red Bull has better boffins than McLaren and in optimising the wing lay-up they have an advantage all the way through the speed range.

The art of copying

It won't be easy for rival teams to copy Red Bull's wing and just find a few tenths of a second straight away. I guarantee that if you put a Red Bull front wing on any other F1 car in a wind tunnel, it would be worse than that team's current configuration.

That's because it's not just the wing that makes the Red Bull the best car aerodynamically, it's the whole aero philosophy of the car, with everything working in sync with each other.

Designers and engineers are intelligent enough to know this, and I believe that this is the reason why nobody has tried to copy Red Bull so far.

All the FIA tests have proved that the Red Bull front wing is totally legal, despite what rival teams believe. As long as this continues to be the case, it's time for the other teams to stop bitching about it and just accept that Red Bull has done a much better job than them. 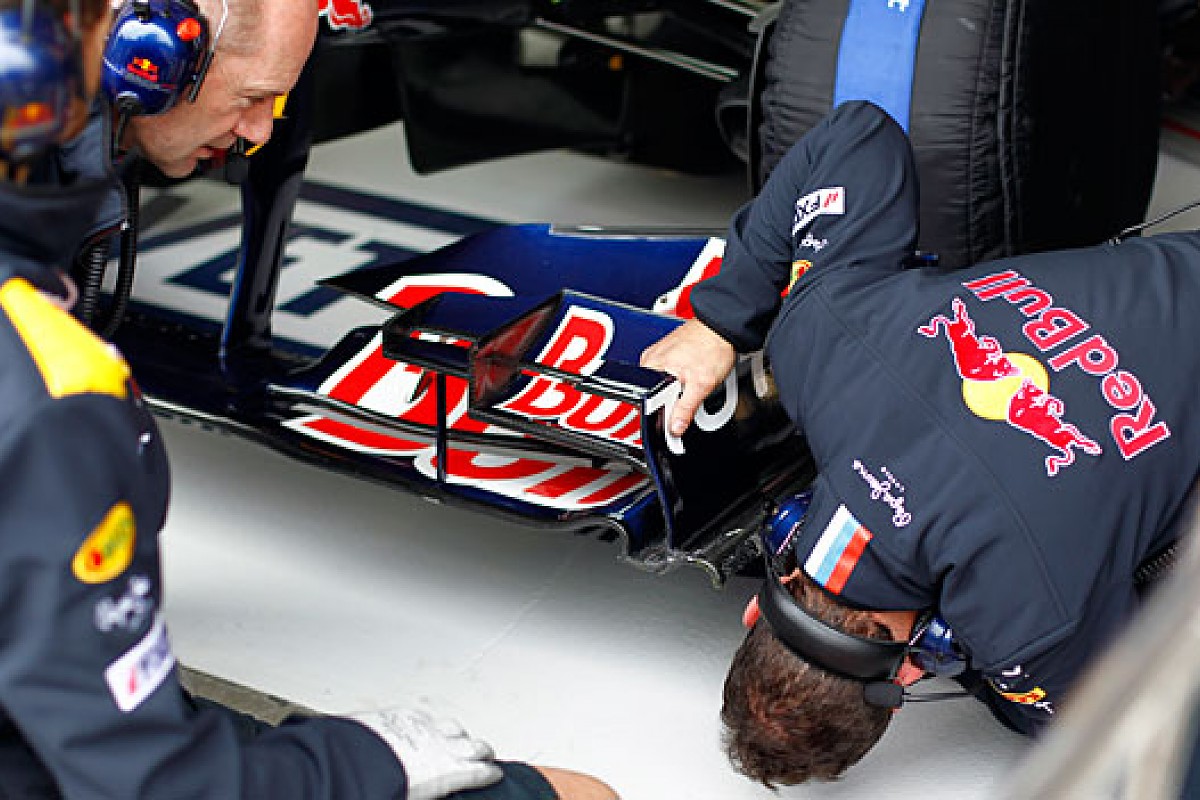