Trick exhaust systems have been the major topic of conversation in the lead up to the new Formula 1 season, but people have been using exhausts to achieve other ends for many years. It comes and goes.

Many of the teams have experimented with different solutions but the purpose is the same: to increase the velocity of airflow underneath the car and thus generate downforce. It's about trying to get that airflow to the underfloor moving as quickly as possible - ¬the diffuser will suck on that and speed the air up by a certain amount. So the faster you can get the airflow to the front of the floor, the better the work the diffuser can do and create more downforce.

Obviously the process is driven by the exhaust gases, so in the days when there was a more linear relationship between the driver and the engine, when he was off the throttle a system like this would be compromised because the flow of gas would stop. Now that we have more sophisticated engine management systems you can make this work more of the time, as opposed to it having an effect just when the driver is on the throttle.

Why, then, is this all so important right now? Since the loophole in the rules that the double diffusers exploited was closed up, engineers have been scratching their heads to find ways to recover the downforce that has been lost.

Last year Red Bull started using their exhaust to accelerate air through the diffuser, and the others followed suit. Everyone learned that they can use these exhaust gases to change the way the car works. Over the winter, some of them have gone off in different directions as they've tried to exploit the exhaust gases a little more.

Renault's interpretation is vastly different compared with Red Bull's. Renault has directed the exhausts out via the front corner of the sidepod, increasing the velocity in that area of the floor and giving a faster feed to the diffuser. Red Bull has concentrated on the foot area inside the rear tyres, and by doing that is extracting the air from underneath the floor. They are trying to achieve the same end but through a different philosophy.

There is a benefit from these systems in terms of grip, but I don't see it being in the order of that generated by double diffusers. I think you've got to have a very highly developed system to get close to that. At the moment, the systems that are working well are worth maybe two tenths of a second a lap, and that's about it; in reality, about 20 kilogrammes of downforce. We're not seeing much more than that, from Renault or anybody else.

I wouldn't be surprised if some teams are already working on a more advanced solution, something that works across the whole leading edge of the floor. That's an area about 40 centimetres long rather than just a round pipe. Although to be honest, sometimes this kind of thing can take more engineering than it's worth.

At any point in time, downforce is good for you so long as it's reasonably stable. As I mentioned earlier, modern engine management systems enable you to not have to shut off the throttle completely under braking, so these exhaust-driven aerodynamic systems are perhaps working under braking at about 50 per cent of what they would on full throttle.

The Renault will be biased towards the front because it's increasing the velocity at that front corner, but the diffuser will use that velocity to produce more downforce under the floor. Red Bull will achieve a similar end by dragging more air under the floor. Neither of them should suffer dramatic problems because they can use the engine to adjust the car's behaviour. For instance, if you're braking and the car is too sensitive because the centre of pressure is too far forward - perhaps because of the Renault exhaust system - you can alter the engine management so the throttle pumps less.

So you can expect slight differences in the handling characteristics but that will fade into insignificance compared with everything else on the cars - the front and rear wings, for instance. If a driver came in and said, "Whenever I lift in the middle of that corner the car gets too much front downforce," then you can play tunes on the engine control system, if it's the exhaust doing it, to change that characteristic.

As far as the design concept is concerned, obviously the Renault package is a bit more dramatic than the Red Bull package because it involved a hell of a lot of staff and a hell of a lot of different materials for heat dissipation, the radiator cooling package, getting the exhaust all the way up there, and getting the engine mapping to work well with that length of exhaust pipe.

It's quite complex, and sometimes you need to be a little careful as to what the return is for the complexity. It will be interesting to see which other teams head down that route because obviously Renault has based its layout around that concept; it hasn't started with a different system and then reworked it. If anyone else changes to forward exhausts it will be very time consuming to get it up and running. I question that it's actually the best solution; personally I would have gone for a lesser compromise for the rest of the car relative to making that all function, because the return is not that big.

The compromises of having a complicated exhaust, as far as the car is concerned centre on the throttle characteristics and overall power, as well as the heat dissipation issues and the possibility that bodywork may catch fire. That's why we've seen some teams try several different solutions during testing. And we still haven't got a good handle on what McLaren was trying to do; it looked like it tried to put the exhaust in the middle of the car, acting on the centre of the diffuser.

It's always difficult to know where people are heading because you can't say, "I'm going into the wind tunnel today and try every possible solution for the exhaust pipe." You follow a theory and try to optimise it in a certain area.

Renault and Red Bull ended up at two different ends of the scale and it's difficult to say, at this stage, whose system is the most effective. As we've seen with McLaren, who had all sorts of heat dissipation issues with their complex exhaust and ended up reverting to a standard set-up, it's all about compromise.

My own preference would be for the Red Bull route, because I think it's the least complicated for probably the best return. The way the airflow is displaced by the rear tyre on the ground affects the diffuser operation quite significantly.

Red Bull's solution blows across the foot of the floor inside the rear wheel and straightens that flow up a bit, making it have less of an effect on the diffuser and underfloor generally. It makes the diffuser more efficient. It's similar to what the team did last year and it offers the least aggravation to the engine.

The Renault system is more complicated and it could be a steep learning curve because exhaust systems can't be changed quickly. There's a lot to consider - harmonics, for instance, which can cause cracking in the pipes.

Exhausts will continue to be a big area of development throughout the year, but it will not happen in isolation. As ever, teams will devote a lot of resources to their front wings because these are the most critical areas of the car, and there's still some room to manoeuvre. There will also be some development on the rear wings with the variable slot gaps.

But so long as there is a perception that the exhausts can be exploited, people will work on that - and when any one team is seen to be getting a strong benefit from a particular solution, everyone else will look to follow that. 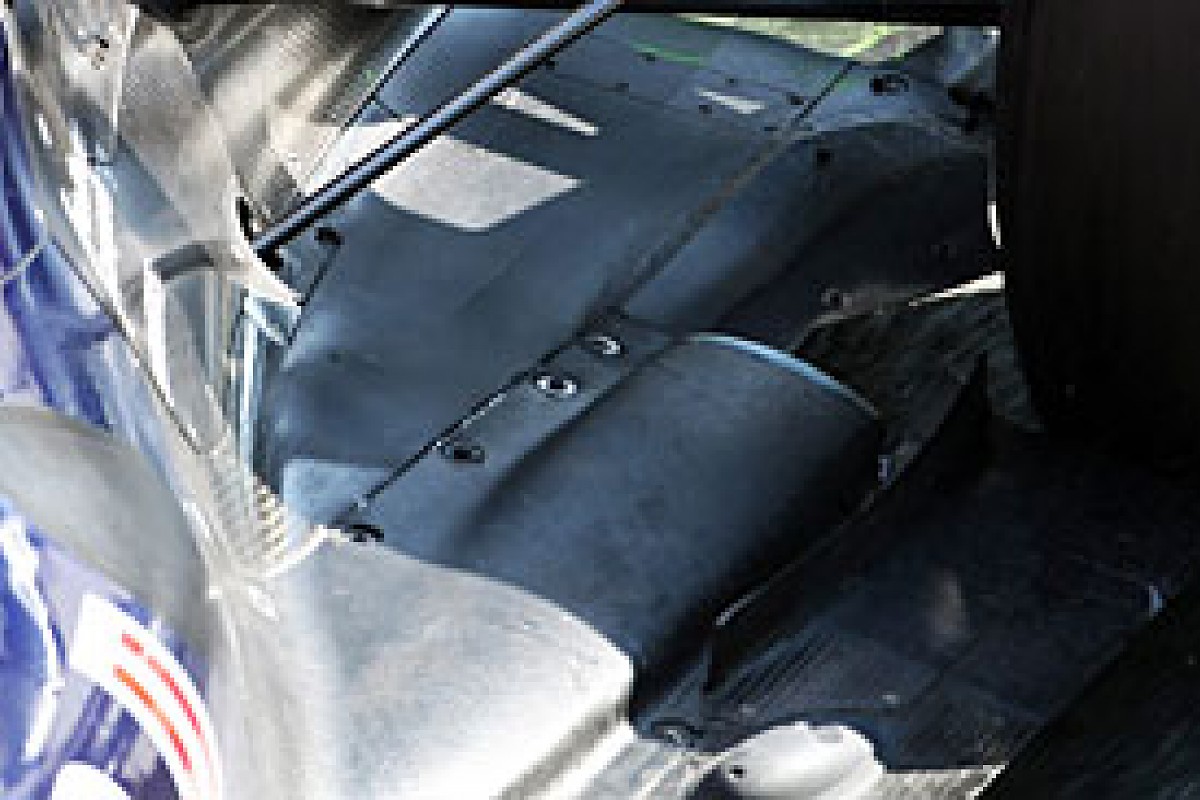