Veloce Racing has dropped Stephane Sarrazin for the final round of the inaugural Extreme E campaign in Dorset to test probable 2022 driver Lance Woolridge with Jamie Chadwick.

Ex-Formula 1 and Formula E driver Sarrazin is understood to have parted ways with the team for good to give reserve driver Woolridge his chance in the Odyssey 21 E-SUV.

This will pave the way for Woolridge, 30, to take the seat on a full-time basis for 2022 after a split with Sarrazin, who has critically damaged the team’s car in three of the four events.

The former Subaru World Rally Championship driver rolled in shakedown for the maiden event in Saudi Arabia, with the radio antenna puncturing the roll cage to leave Chadwick only able to drive one lap.

Sarrazin then suffered suspension failure in Greenland following a brilliant double overtake for the lead of a three-way heat that had forced him to run through a patch of boulders.

Then in Sardinia most recently, he endured a huge roll once again while chasing after a heat victory.

Veloce's patience with Sarrazin waned when the subsequent damage forced the team to miss the following day's valuable test.

It was also unable to enter the rookie test to give a run to Woolridge and Norgweigian rallycross driver Hedda Hosas. 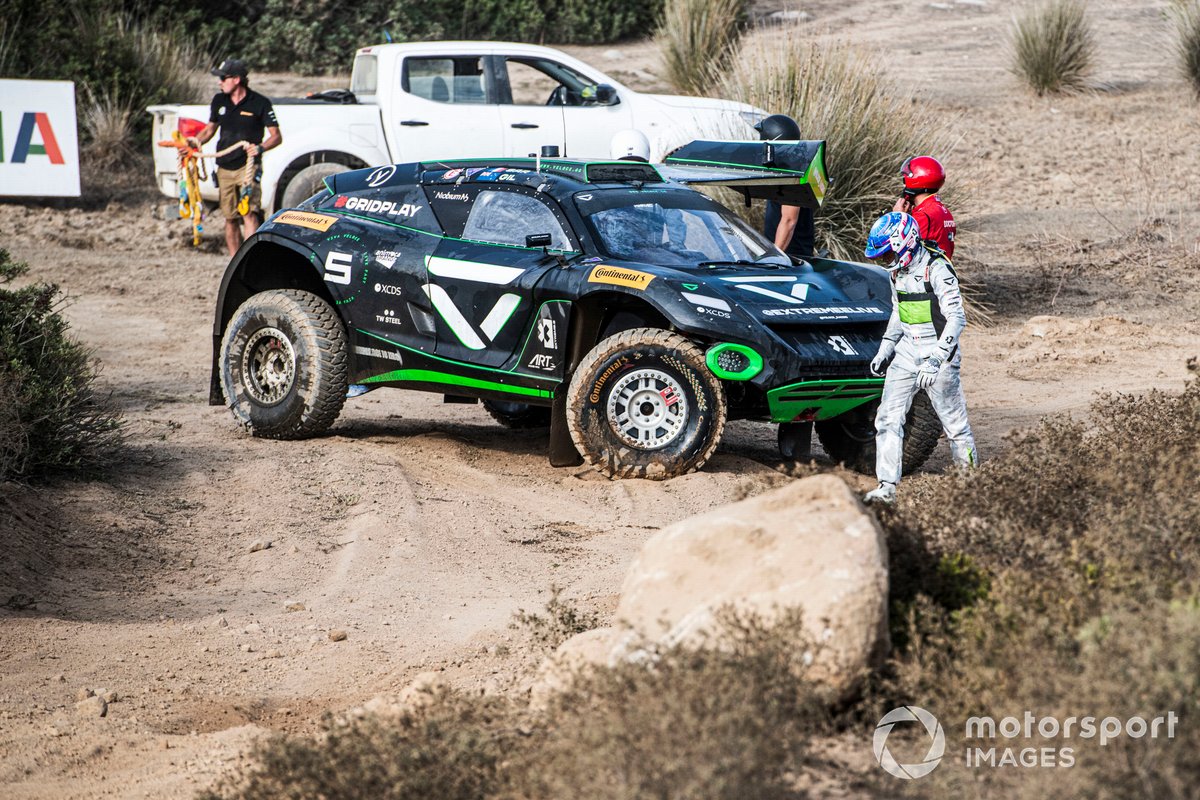 Damaged suspension after contact with boulders caused DNF in Greenland

While a Veloce Racing statement failed to mention Sarrazin in any capacity, team principal Ruper Svendsen-Cook said: “I think I can speak for everyone at Veloce when I say we’re really excited to have two such talented drivers behind the wheel for the Extreme E season finale - and our home race - in Dorset later this month!

“Lance [Woolridge] has been doing a fantastic job as our Reserve and Development Driver this season as well as having a great year racing in South Africa.

“Then of course we have Jamie [Chadwick] who won Veloce’s first-ever title in W Series back in Austin so we believe we have the best line-up possible to finish the season on a high!”

Chadwick ended up missing two rounds of the season owing to clashes with the W Series calendar and her part-time Veloce replacement Emma Gilmour has since been signed as the first-ever female driver on the books at McLaren Racing to lead its 2022 Extreme E bow.

Veloce team manager Ian Davies added: “We’ve been hugely impressed with the work Lance has done for us this year. He’s been a huge asset to the team, so we have total confidence in his abilities ahead of Dorset.

“Likewise, Jamie has had an incredible year in W Series and scored our first podium in Senegal let’s not forget, so she certainly knows her way around the ODYSSEY 21.

“Together, these two drivers are going to be a potent combination.”