The RXR team was drawn to run sixth on the 5.48-mile circuit in the AlUla region, with Kristoffersson taking the start to deliver a super clean and efficient lap.

He pulled into the driver change zone and handed over to Australian Rally champion Molly Taylor who overcame a massive moment when the rear of the car kicked up.

But she kept the Odyssey 21 E-SUV under control to cross the line for a combined time of 10m43.565s to lead, which the driver duo would maintain for the rest of the session.

The X44 team, entered by Lewis Hamilton and run by Prodrive, was the first to take to the course with nine-time World Rally champion Sebastien Loeb at the wheel. 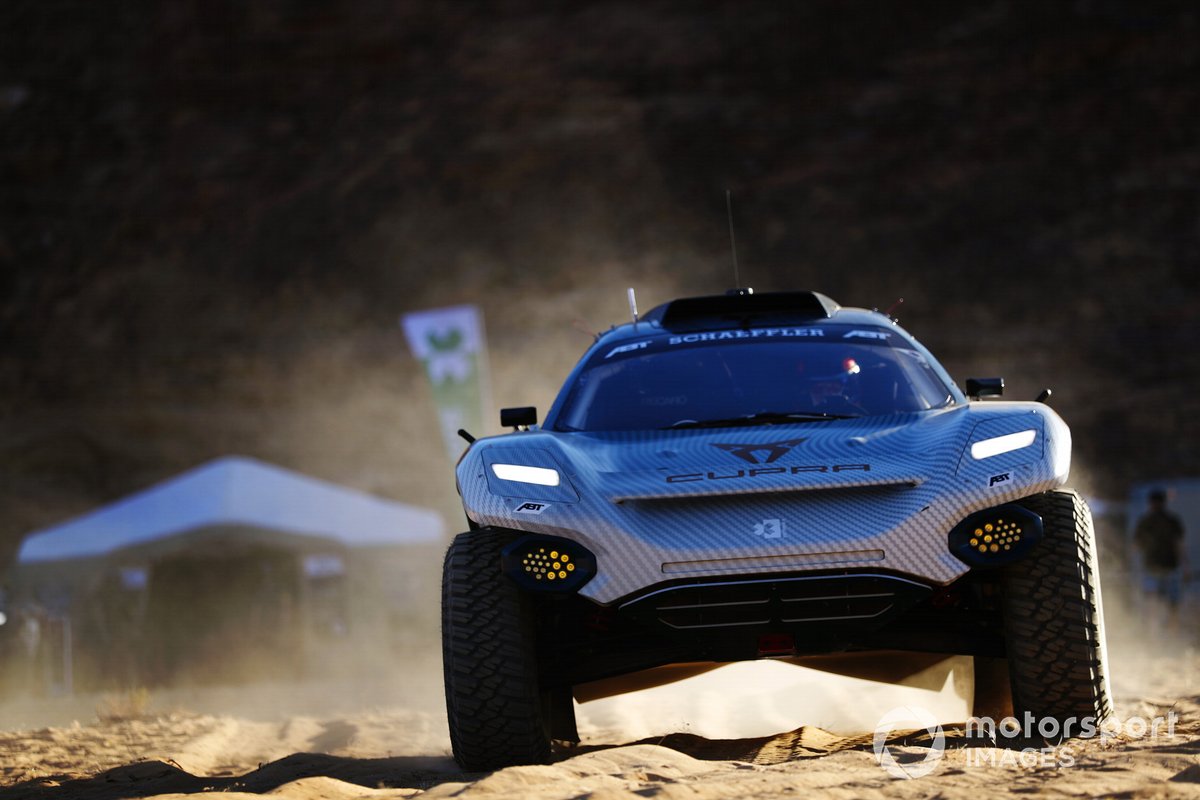 He suffered a big slide off line on the run to the first dune where the course narrows before handing over to team-mate Cristine Gutierrez to complete the 10m48.067s run, 4.5s behind RXR.

Carlos Sainz Sr and Laia Sanz shared the Acciona machine to third place. An erratic but entertaining run from team stakeholder Sainz meant he dropped 12s to Loeb, with the duo ending up 33s off the pace.

Myriad reliability issues for rival squads meant the Andretti United concern ended up fourth, despite Catie Munnings sustaining a right-rear puncture that she carried for the final third of the lap.

Jenson Button’s JBXE team was also hit by problems. When the 2009 F1 world champion hit a bump in shakedown the car switched into neutral.

With a lack of data, the motor on the car was turned down by 8% and he ended up with 26% battery capacity remaining at the end of the team’s run.

Team-mate Mikaela Ahlin-Kottulunisky suffered the same neutral issue as the previous day, coming to a stop for close to half a minute. The team will now change the motor.

Hispano Suiza was the only entry to start its female driver, but Christine Giampaoli Zonca sped through the 30km/h-limited driver change zone and copped a 75s penalty. She and team-mate Oliver Bennett were 2m25 off the pace and ended up sixth.

Chip Ganassi Racing’s shakedown woes continued after a 12V battery issue and a roll for Kyle LeDuc meant the team worked through until 0500AM to repair the car.

Neither LeDuc or Sara Price had managed to complete a lap prior to qualifying and were then hit by a power steering failure on their run to cross the line 2m50s adrift.

Abt Cupra and Veloce Racing both failed to set a time after two sizeable crashes.

At the foot of the first dune, Stephane Sarrazin hit a camel grass bush and twice rolled the car. It could not be returned to the service park until after the session.

The team expect to repair it in time for the afternoon but must first change the battery for safety reasons.

A second red flag was caused after a huge shunt for Abt Cupra driver Claudia Hurtgen. Taking over the car from team-mate Mattias Esktrom, she went to correct a slide and as the rear of the car hit a bump she dug in.

She twice rolled over before the car began to turn and she then flipped end over end twice again.

Hurtgen walked away from the wreckage unassisted and was reported to only have bitten her tongue.

Although there are enough spare parts on site for three full cars, Abt Cupra is expected to miss the afternoon qualifying run as the car will require a complete chassis change.