Lewis Hamilton is pleased Formula 1 fans are excited by a Mercedes against Red Bull title fight but warns that Max Verstappen’s squad could “be ahead a lot more” after Bahrain.

Verstappen claimed pole for F1’s 2021 season opener by 0.388-seconds and showed race-winning pace after leading the early stages of the Bahrain Grand Prix.

He ultimately lost out after Mercedes’ aggressive strategy got Hamilton ahead, and the world champion’s tyre management skills on a long final stint meant the Dutchman only had one late chance to pass, which controversially went wrong.

Mercedes warned after the Bahrain race that its 2021 package does not “really have any strengths relative to [Red Bull],” per trackside engineering director Andrew Shovlin in the aftermath of Hamilton’s win, with the team also predicting that it will struggle at F1’s next two races at Imola and Portimao.

When asked for his reaction to fan excitement about a possible season-long battle for the 2021 title – a scenario the championship has not had since Sebastian Vettel and Fernando Alonso took the 2012 season to the wire – Hamilton said: “I’m super excited and super happy for the fans, that they are excited.  I think it’s something that all the fans have wanted for a long time.

“Of course, this is only one race, so we don’t know what the future holds in terms of [how the season will unfold].

“With the pace they have, they could be ahead a lot more, but we’re going to work as hard as we can to try and stay close in this battle. 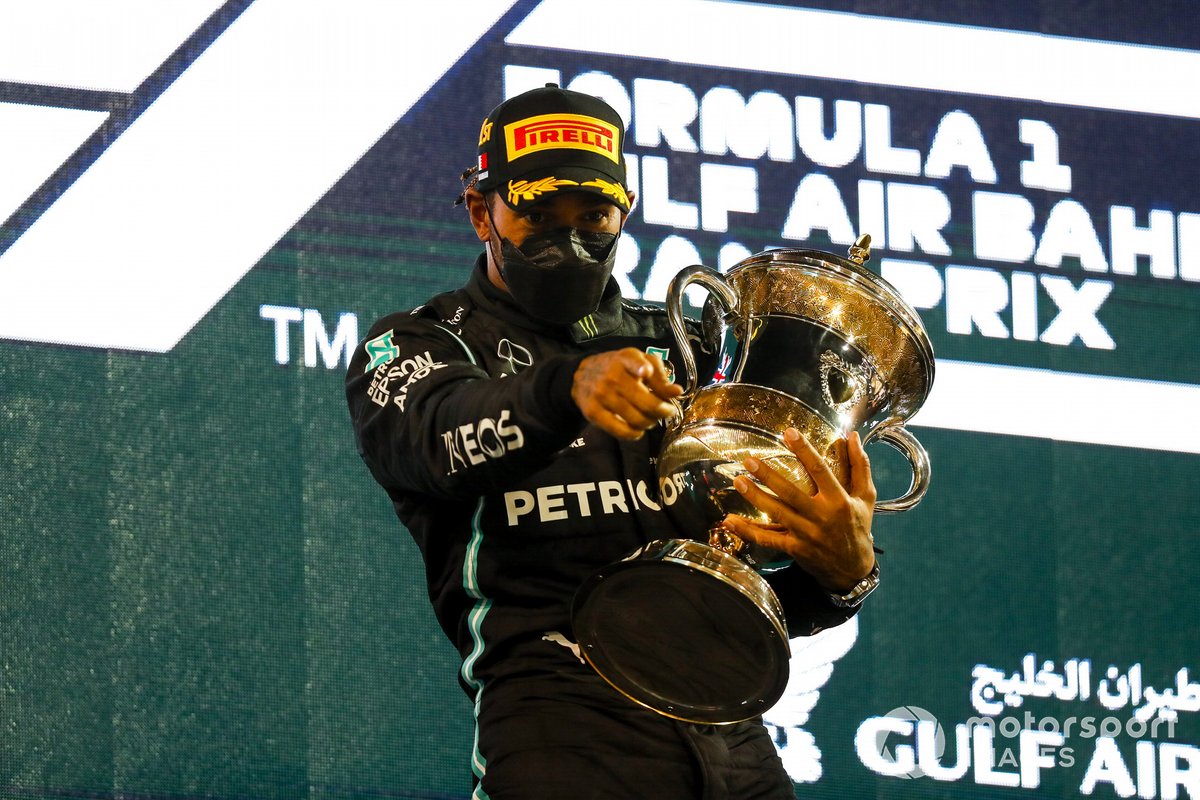 Lewis Hamilton, Mercedes, 1st position, on the podium with his trophy

“I hope for many more of these sorts of races with Max and Valtteri [Bottas, who finished third in Bahrain last weekend]. There’s a long way to go. 22 [races] – holy crap! I’ll be grey by the end of this!”

Verstappen was also asked if he was relishing the prospect of fighting Hamilton for race victories across a whole season – with consistency something Red Bull has lacked since the 23-year-old was promoted to the team from its Toro Rosso sister squad back in 2016.

“It was great today but like Lewis said, it’s a still bit difficult to say where we are exactly in pace,” said Verstappen.

“But, again, it’s also a very long season so I guess we will just find out in time how it’s going to go.”