X44 hung on to head the combined Extreme E qualifying times in Greenland for the Arctic X-Prix despite the session-topping afternoon form of the recovering Rosberg X Racing squad.

Sebastien Loeb and Cristina Gutierrez had run fastest in the morning by a sound 3.7s but were pipped in the second session by the final flying run of Nico Rosberg’s concern.

This came after Loeb acknowledged a deliberately conservative lap in a bid to avoid the reliability woes that had afflicted their rivals in addition to losing 1.5s with a sluggish driver swap.

While Gutierrez completed the team’s performance with a 4.504s advantage to lead at the time of X44’s entry, that effort was blown away by a charging Johan Kristoffersson and Molly Taylor.

Taylor started strongly, fighting back after her morning rollover and repairs which dropped them from fifth to ninth in the running order, before jumping out for Kristoffersson.

The three-time World Rallycross champion then set the fastest lap of the afternoon, a 6m06.840s, to combine with Taylor and carve out a clear 10.951s cushion at the top.

Kristoffersson’s lap was some 21s slower than Loeb’s morning effort, though, owing to car power being cut back to 200kW - down from the 275kw for practice and 225kW for Q1 amid reliability faults.

That time arriving in addition to three car shutdowns for Kristoffersson in the first session meant they were only fifth fastest in the overall leader board and booked a slot in the second semi-final.

It left X44 to top the combined times and progress into the first of Sunday’s semi-finals and ensured the team maintained its 100% qualifying record after three series events.

Abt Cupra took second overall despite an afternoon session kiboshed by a double puncture. 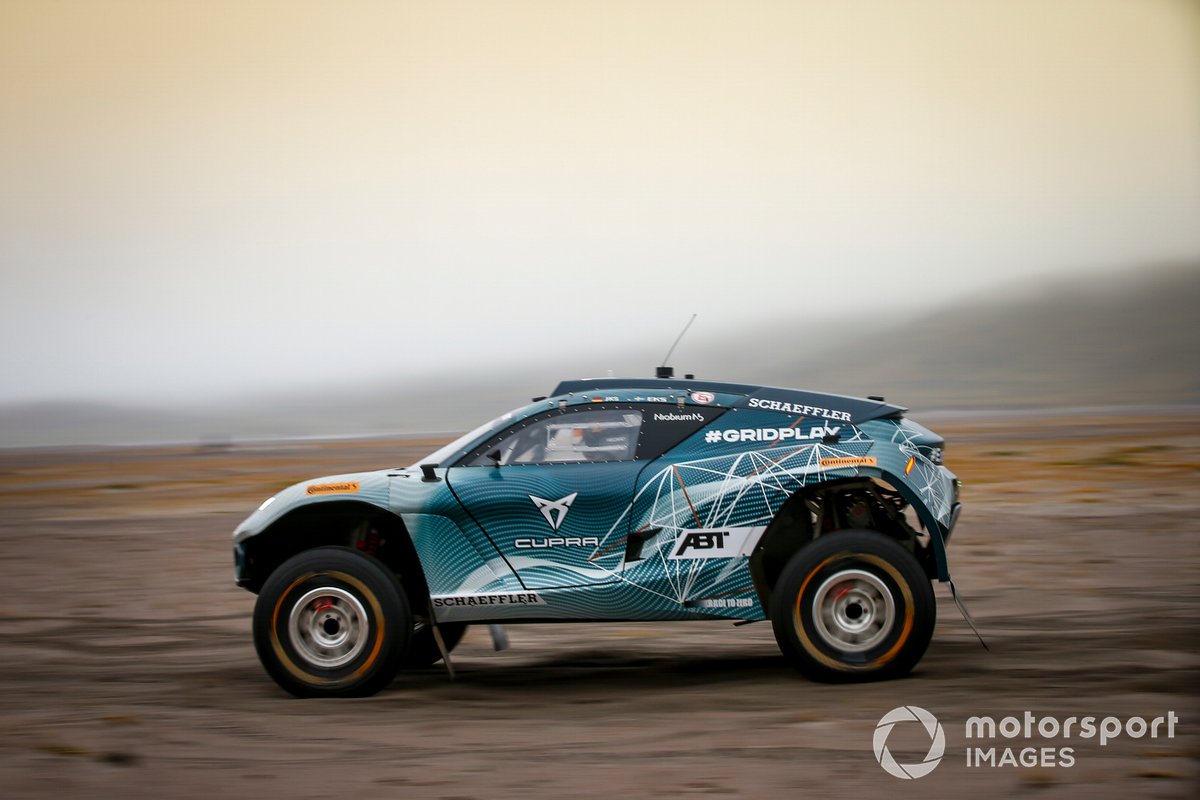 Jutta Kleinschmidt never made it out on to the course after Mattias Ekstrom and his crew were unable to swap both of the damaged bead lock wheels in the driver swap zone.

Ekstrom was off the pace for much of the second half of his lap and then through the ‘rock garden’ the car lowered on its haunches, and he ran slowly to the pit lane equivalent.

After one wheel gun failed and the deep sand further delayed the jack raising the car, both wheels were removed and revealed sizeable dents to the rims which had allowed air to leak.

With Rosberg X Racing third, the second semi-final grid was completed by Timmy Hansen and Catie Munnings for Andretti United, as both drivers impressed hugely.

Munnings’ lap and a fast driver swap paved the way for Hansen to complete the run with the fourth-best time of the afternoon, with the Swede taking a wide line to avoid the ruts.

Veloce Racing, which was hampered by a 10s penalty in the morning when debutant Emma Gilmour ran down a waypoint flag, was fortunate not to finish lower than fifth overall.

Team-mate Stephane Sarrazin started the second session but was soon hindered by the latest power steering failure to hit an Odyssey 21 E-SUV, which could not be remedied by the experienced endurance racer stopping on course to reset the car.

The Acciona Sainz team, also suffering a power steering fault in the morning, ran well in the afternoon thanks to Carlos Sainz Sr nicking the second fastest time with a 6m09.393s. 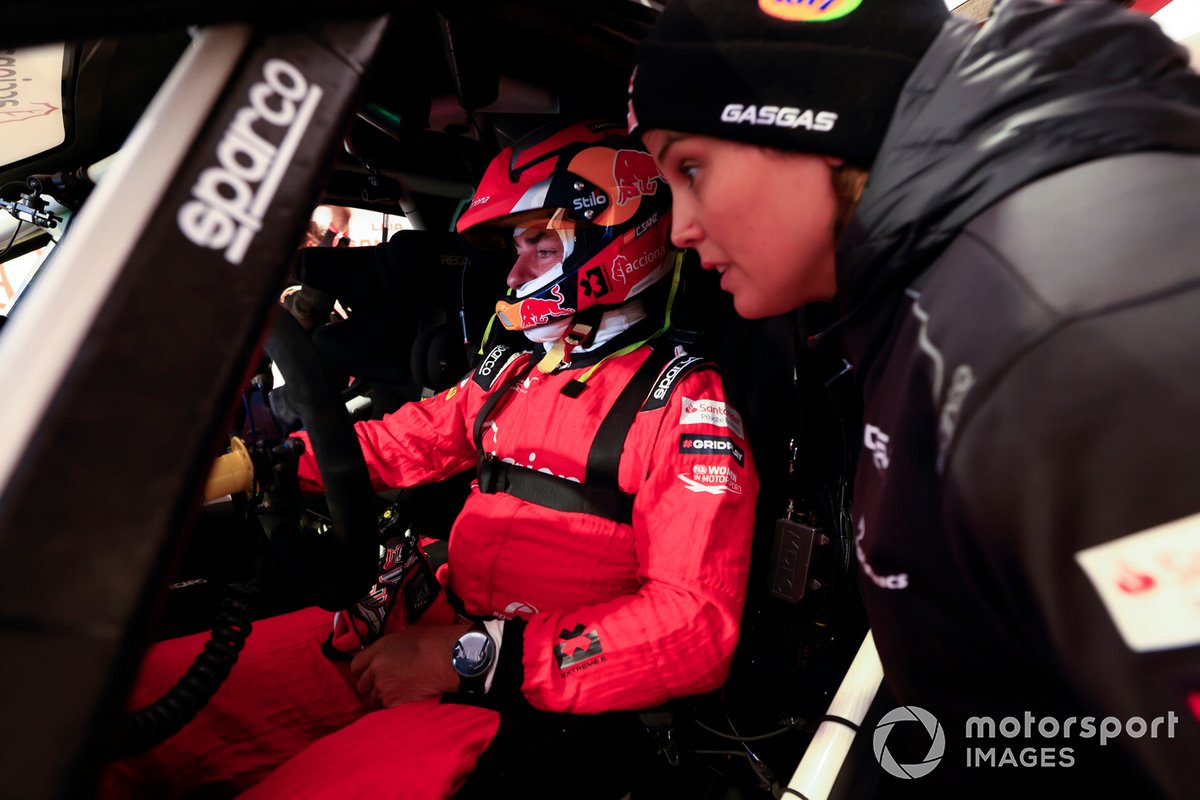 But Chip Ganassi Racing did not share the same fortune when the suspension failed dramatically for Kyle Leduc after what appeared to be a very minor knock.

The fast American had only just begun his lap, was running at medium speed and over soft sand, when the wheel rim made small but square contact with a bank.

That left the entire rear-left corner to collapse spectacularly and force the session to be red-flagged. The team will need to progress from the shootout race after qualifying seventh.

Also in the wars were the remaining teams of JBXE and Xite Energy Racing.

Kevin Hansen opened the afternoon batting for Jenson Button’s squad, but his car failed on the run into the driver change over zone at a cost of 15s.

The failure appeared very similar to the issue suffered by Kristoffersson in Friday free practice, which occurred in the same braking zone.

Kristoffersson reported to Autosport that the engineers from Spark Racing Technology, builder of the Extreme E car, had told him he “braked too hard”.

Button, again electing not to drive, was seen shaking his head from the ‘Command Centre’ when Hansen ground to a bizarre halt.

The Xite effort, which was not televised, is believed to have been scuppered by a stoppage early into the lap on the approach to the first hill.

A subsequent car restart failed and Oliver Bennett and Christine Giampaoli Zonca were forced to retire and qualified last as a result.