Maxime Martin finished third to complete a podium sweep for the Bavarian marque, while Mattias Ekstrom, who led the championship heading into the weekend, failed to finish.

After leading an all-BMW top four in qualifying, Glock made a strong getaway from pole to hold an early lead ahead of Wittmann, Martin and Augusto Farfus.

The top three soon began to pull clear of the rest as Farfus acted as tail gunner, which frustrated the advances of lead Audi driver Rene Rast.

That was how the order up front stayed until the leaders pitted, with Wittmann and Martin coming into change tyres on lap 7 of 37, followed by Glock and Farfus over the next two tours.

Rast therefore inherited the lead ahead of his Audi team-mate Loic Duval, with the pair both choosing to leave their stops until much later in the race, on laps 18 and 27 respectively.

Bruno Spengler held out for two laps after Duval before coming in, at which point Glock resumed the lead narrowly ahead of Wittmann, Martin and Mike Rockenfeller, who had stopped on the opening lap.

But Rockenfeller was unable to break the BMW monopoly on the top three positions after spending many laps bottled up behind Martin, and he let Audi stablemate Jamie Green through late on. 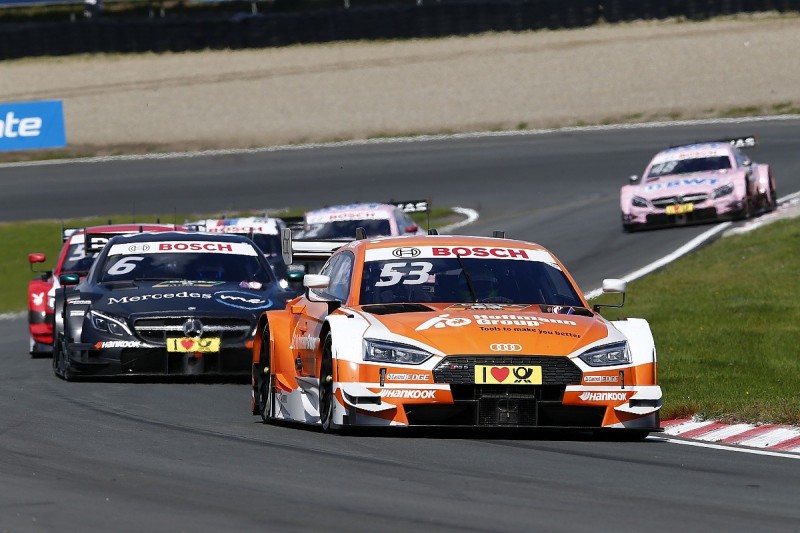 Green was similarly unable to make an impression on the BMW leaders, and he ended up giving the place back to Rockenfeller on the last lap as Glock took the chequered flag just 0.1s ahead of Wittmann, with Martin also within one second.

Sixth went to Farfus, followed by the top Mercedes driver, Paul di Resta, who spent many laps holding up Rast after the German racer made his pitstop.

Having passed Gary Paffett's Mercedes on fresh tyres, a late mistake meant Rast dropped back behind the Briton and fell to ninth.

Nico Muller staved off a late assault by Mercedes pair Robert Wickens and Edoardo Mortara to secure the final point in 10th.

Duval, who was hit by a five-second penalty for jumping the start, ended up 13th.

Mercedes' title contender Lucas Auer came home down in 15th after going off track while fighting Muller in the early stages, and finished ahead of Maro Engel, who ran into the gravel on the opening lap.

Ekstrom also found the gravel, doing so at Tarzan after an early stop before spinning, and he eventually retired with a handful of laps to go.

Rast's ninth place moves him ahead of Ekstrom in the standings by one point, while Glock's victory promotes him to fourth in the championship on 98 points, 16 behind the top spot.

BMW driver Tom Blomqvist, who joined Rockenfeller by pitting on the first tour, also retired in the pits.