Red Bull’s DTM rivals have said they feel they don’t stand a chance at beating the AF Corse squad in pitstops this season.

The Red Bull-branded team clocked the fastest pitstop time in the opening round of the revamped series at Monza, servicing Alex Albon’s Ferrari 488 GT3 in just 6.961s.

In fact, none of its four pitstops across the weekend were slower than 7.9s, contributing to Liam Lawson’s charge from seventh to victory in Saturday’s race.

The closest any team came to matching Red Bull’s pitstop was HRT Mercedes, registering a time of 8.7s while changing tyres on Vincent Abril’s AMG GT3.

"The Ferraris were one to two seconds faster than everyone else," former DTM champion Martin Tomczyk told the official website of broadcaster Sat.1. "That's a world away in motorsport."

Abt Sportsline boss Thomas Biermaier added: “We can look to get closer, but we don't stand a chance against these times.”

A combination of superior equipment and technique is believed to be the key reason behind Red Bull’s rapid pitstops in the DTM so far.

The mechanic operating the wheel gun first loosens the front wheel, but instead of waiting for the fresh tyre to be fitted by another mechanic, he runs straight towards the other side of the car, completing the entire procedure on the rears. He swiftly returns to his original position, tightening the wheel at the front.

Biermaier believes this is where Red Bull gains a chunk of time over its rivals.

"The wrench man goes to the wheel at the front and just loosens it,” he explained. “He does the wheel change at the back, saving himself the trouble of pulling the wheel off once and putting it down. That alone costs us a second.” 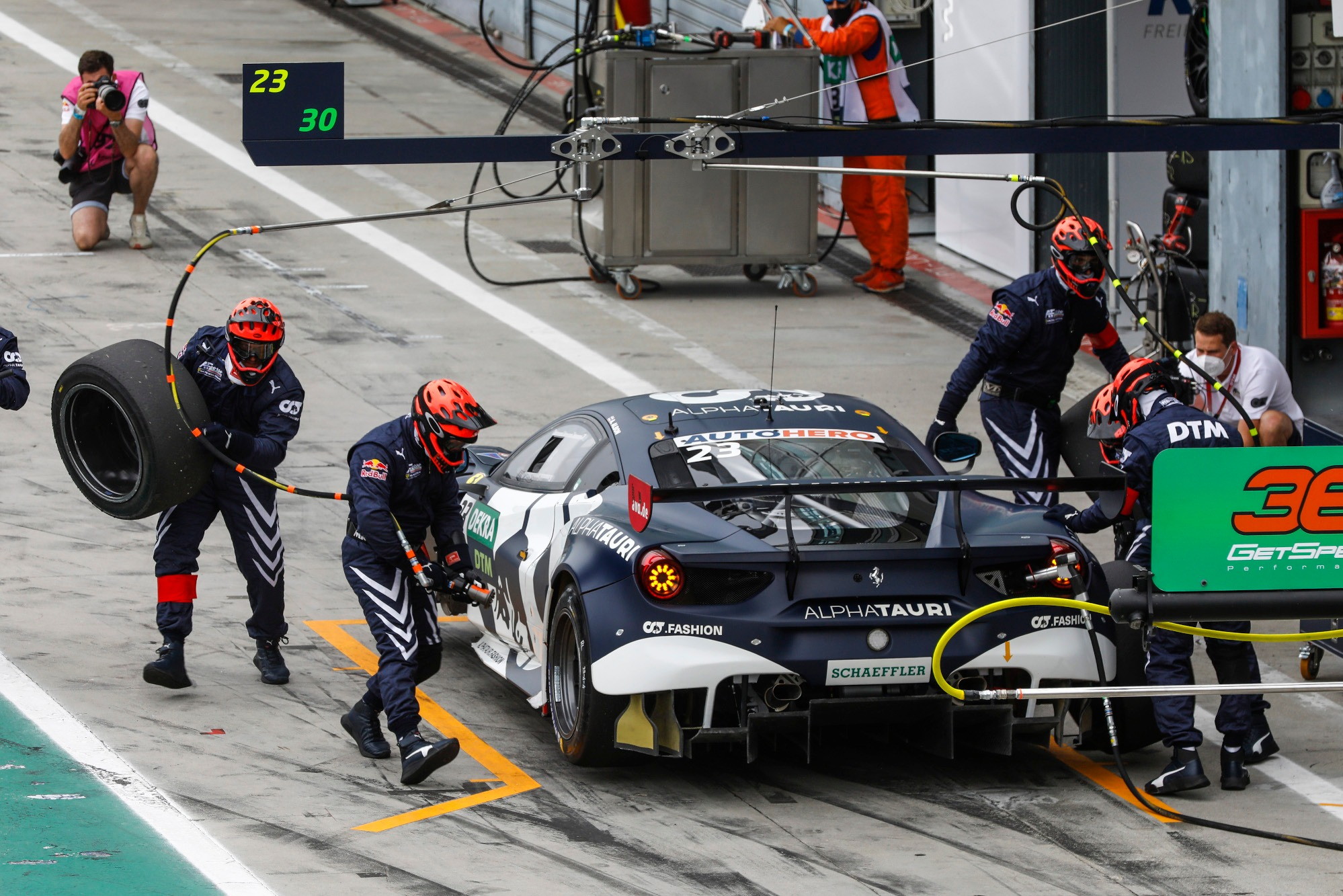 Mercedes-AMG customer sports coordinator Thomas Jager shared the opinion of the Abt team boss, saying: “You don't have the dead time that you have to wait until the wheel is put on. You just have more walking distance.”

The architect behind Red Bull’s pitstop procedure is Ron Reichert, who was previously responsible for Audi’s customer racing programmes in Asia. Reichert was recently hired by AF Corse team principal Amato Ferrari for the outfit’s entry into the DTM with Red Bull, and is believed to have spent the last few months perfecting the team's pitstops.

However, Red Bull’s rivals can’t simply copy its techniques from the next round at the Lausitzring this month. Ferrari’s GT3 car comes with a locking ring, which ensures the nut doesn’t come loose before the mechanic tightens it.

Audi, BMW and Lamborghini teams do not have this luxury and are forced to change one wheel in full before moving on to the next.

Mercedes’ GT3 cars do have a similar system but Jager insists it won’t be able to gain the same amount of time by adopting the technique as the Ferraris, with the manufacturer employing aluminium wheel guns instead of the more commonly used steel versions.

"[Ferrari's system] has a small advantage against our wheel lock system," said Jager. "They have fewer threads when they tighten. And because of that, they can tighten it incredibly fast.

"That was also the issue at Lucas Auer's stop. And you can't optimise anything there, because the system is homologated. The Ferrari system, on the other hand, is not as prone to errors."

Nevertheless, Mercedes is looking into adopting Red Bull’s pitstop procedure to cut down the gap to the benchmark team in the series.

"Implementation is a team thing," Jager said. "But everyone has seen that there is a need for action. The teams will analyse everything again and see what the fastest way is."

"We have a performance engineer with the teams, have collected all the information and are now looking over it.”