The 19-year-old Kiwi, making his first start in a GT car alongside his main campaign in Formula 2, leapfrogged a quartet of Mercedes cars with a relatively early stop in his AF Corse-run Ferrari 488 GT3 to give Red Bull victory on its return to the series.

It was Ferrari's first win in the series, which has moved to GT3 regulations this year, and the first for any non-German manufacturer in the DTM since Nicola Larini's victory for Alfa Romeo in the 1996 International Touring Car Championship race for DTM cars at Sao Paolo.

Lawson beat poleman Vincent Abril's Haupt Racing Team Mercedes by 1.63s after Ferrari, BMW and Audi were all handed a pre-race performance boost by DTM’s BoP partner AVL Racing, with Mercedes cars having locked out the top four spots on the grid.

At the start, Abril led the field from Daniel Juncadella's GruppeM Mercedes, as Maximilian Gotz (HRT) jumped Lucas Auer (Winward Mercedes) to move up to third.

Lawson made a brave getaway from seventh on the grid, clearing the T3 Lamborghini of Esteban Muth on the run to the first chicane before gaining another place due to a retirement for Winward driver Philip Ellis.

The order at the front then began to to stabilise, with much of the field running nose to tail.

That allowed Lawson to come out in clean air, which proved to be decisive in the fight for victory. 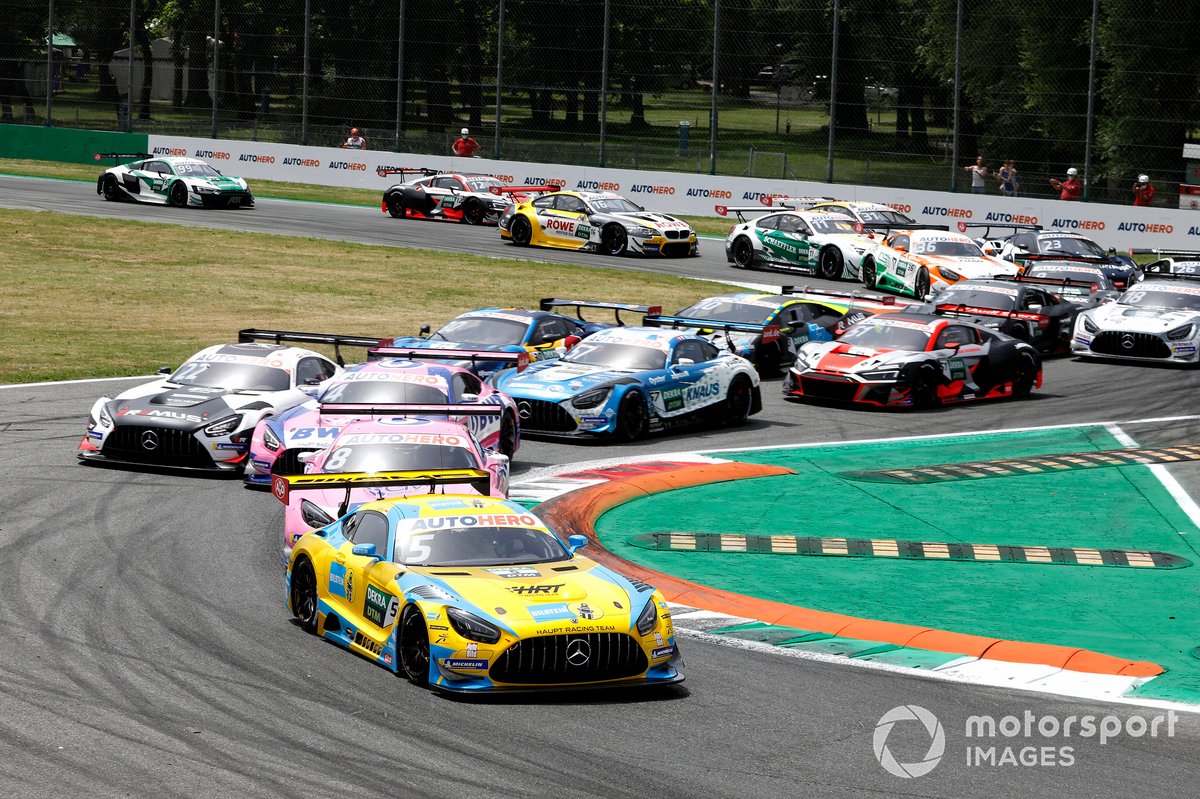 So when Abril finally headed to the pits on lap 11, he was unable to fend off Lawson on cold tyres, the Ferrari passing him into Turn 2 to take the net race lead.

From there on, Lawson enjoyed a clear run to the finish, even though Abril was able to close the gap back up to 1.6s in the closing laps on fresher tyres.

Gotz made it two Mercedes-AMG GT3s on the podium in third, while Lawson's team-mate Alex Albon charged from 14th to fourth in the AlphaTauri-liveried Ferrari.

The Red Bull Formula 1 reserve driver pitted a lap after Lawson but had to work his way through traffic, with both Muller and Kelvin van der Linde overtaking him on his out lap.

However, Albon was able to repass the Audi duo and then fend off the Mercedes of Juncadella to take fourth at the flag.

Gary Paffett’s stand-in Maximilian Buhk was the last driver to make a pitstop, with a lengthy first stint elevating him to seventh behind Juncadella and van der Linde’s Abt Sportsline-run R8 LMS GT3.

Team Rosberg driver Muller was nudged into a spin going into the second chicane by Juncadella, but the Swiss driver recovered well to finish eighth, less than two seconds behind Buhk's Mucke Mercedes.

BMWs enjoyed better pace in the race after qualifying near the rear of the grid, with two-time DTM champion Marco Wittmann propelling the Walkenhorst M6 to ninth at the finish ahead of 2013 title winner Rockenfeller's Abt Audi.

Auer finished outside the points in 13th after a lengthy pitstop, with the Winward mechanics struggling to detach the rear-left wheel gun on his Mercedes.