BMW's Marco Wittmann won the Norisring DTM finale, as the battle between title rivals Timo Glock and Gary Paffett burst back into life in the midfield

Wittmann was able to build an initial 2.5 seconds lead in the final quarter of the race that allowed him to go unchallenged to the flag, having used the early stages of the race to create a platform for victory.

Starting seventh on the grid, the BMW driver quickly made his way onto the rear of the fifth-placed Mercedes of Paul di Resta but was unable to find his way past at first.

A lap after Wittmann began pressuring him, Di Resta opted to go for an early stop from fourth - releasing Wittmann into the position and clear air.

Wittmann himself stopped on the 12th lap of 68 and returned in the midfield pack, quickly using Bruno Spengler to his advantage as Wittmann's BMW team-mate held up a convoy of runners in eighth.

Edoardo Mortara had stopped on the opening lap in his Mercedes from fifth place and had rejoined the track first of the five to pit at that point, before quickly working his way up through those who took their pitstops on the following laps to run 10th.

Wittmann squeezed past Spengler to go seventh and vitally put several positions between himself and Mortara.

Two-time DTM champion Wittmann then made the crucial pass for the net lead by using his fresher tyres to pass polesitter Dani Juncadella once he had taken his stop, putting him fifth behind those yet to stop.

Once the pitstops had cycled out, Wittmann stormed into a comfortable advantage over Mortara, Juncadella and Spengler before backing off in the closing laps.

Further down the field, the title race resumed between Paffett and Glock, evoking memories of their battle for the race win at Hockenheim.

Paffett had been second on the grid before his pitstop on lap 11 proved slow, taking 8.5s, and dropped him down the order into the clutches of Glock for 14th and 15th.

Just as had been the case at Hockenheim, Paffett's Mercedes had the speed advantage on the straights with Glock's BMW holding the edge on the tight corners of the Norisring. 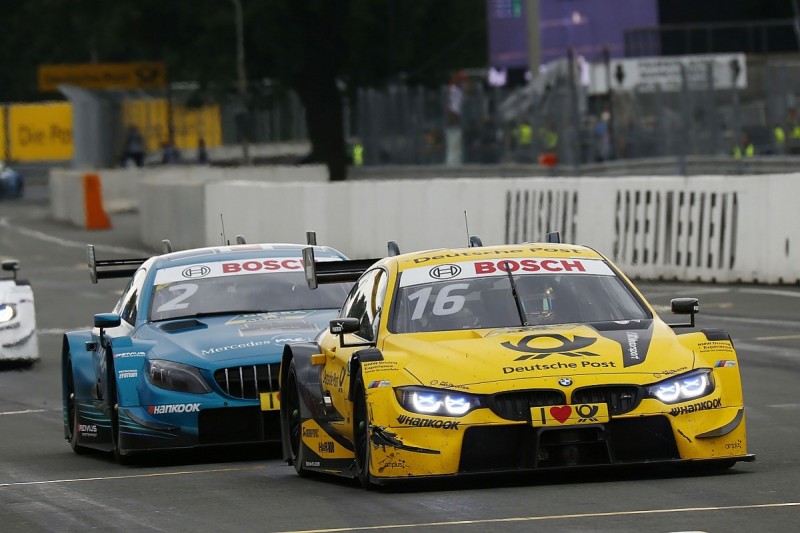 They would battle for almost 20 laps, with the first significant bout coming when Paffett locked up into the hairpin and rear-ended Glock, requiring the BMW driver to make a sharp save.

They continued to bang doors through that corner, with one particular stern block from Glock causing Paffett to shout "he has to give the place back" over the radio, before later calling Glock's defensive driving "ridiculous".

For all Paffett continually drew alongside Glock, he was unable to find the decisive pass and the battle ended when Paffett's strong run into the Scholler S preempted a lurid slide that cost him two places.

That proved decisive as Glock remained in 10th - the first points scoring position - ahead of Paffett, which meant the Mercedes driver's championship lead came down to six points over Mortara, with Wittmann and Glock a further point back.

Glock had been unable to overtake Pascal Wehrlein for ninth, with the former Formula 1 driver running a lengthy opening stint of 40 laps.

He ended up behind the two Audis of Nico Muller - who made up several places in a blistering start to the race - and Robin Frijns, who also ran a long first stint for eighth.

Neither had an answer to the leading pace of Mercedes and BMW, with the pair finishing behind Mercedes duo Lucas Auer and Di Resta who completed the top six.

Audi's woeful 2018 season continued when defending champion Rene Rast's pitstop took over 15s with a left-rear jack problem that dropped him to 14th ahead of Jamie Green and Mike Rockenfeller.

Loic Duval was the final Audi in 18th, behind Augusto Farfus's 17th-placed BMW.