Nico Muller conceded significant ground in the 2019 DTM title race after a nightmare showing at the Nurburgring, while Audi stablemate Rene Rast won his sixth race of the season

Muller had looked set to challenge for the lead off the line when he squeezed past BMW's Bruno Spengler for second, but it quickly became apparent that the Audi Abt driver had jumped the start.

He took his subsequent drivethrough penalty at the end of the third lap of 41 and swiftly returned to the pits for his mandatory pitstop three laps later, taking the gamble of a safety car to shake up the order.

But a safety car never materialised and Muller struggled to make up ground until the pitstop window, making his way up to the fringes of the top 10 before his aged tyres began to drop off.

He was embroiled in a late battle with R-Motorsport Aston Martin driver Paul di Resta, forcing the 2010 DTM champion onto the grass at the exit of the Turn 5 hairpin as Di Resta smashed through an advertising board and continued.

Muller was shown a back and white flag for the offence and then slipped down the field to 16th at the flag - the last of the classified runners - as Rast cruised to victory unchallenged.

Polesitter Rast ran with fellow Audi driver Mike Rockenfeller in close support for the majority of the race and Rast was able to build a gap of over 15s before Rockenfeller slowed on track and pulled into the pits late on to retire. 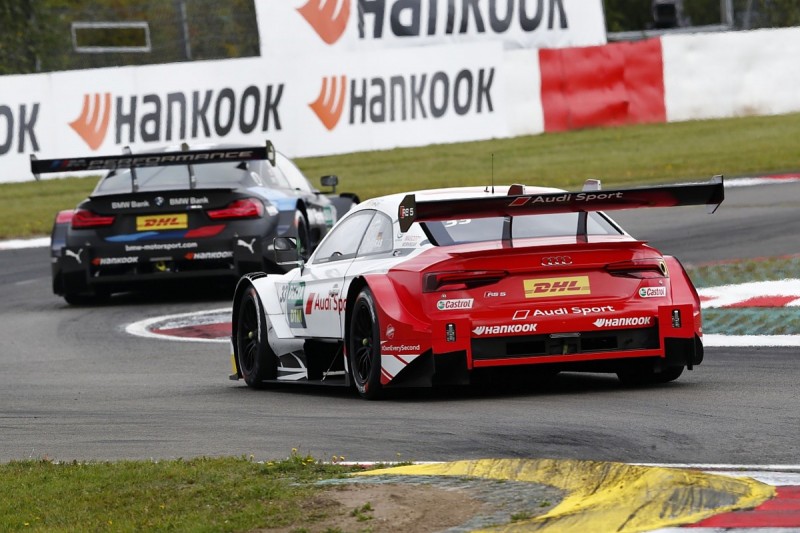 Consistently lapping around half a second quicker than his rivals, Rast managed the gap to take a comfortable win that extended his title lead over Muller to 47 points - over double his advantage following qualifying.

Marco Wittmann kept his increasingly slim title hopes alive by finishing third after charging from 11th on the grid.

After climbing to seventh on the first lap, Wittmann's RMG BMW team called the strategy perfectly for him to re-join the track in a train of cars battling for fourth.

While he had come out ahead of Spengler initially, Wittman ran wide midway through the Mercedes Arena bend on his outlap to allow Spenger into what was eventually a net second place, as Wittmann battled against his cold tyres.

But Wittmann was boosted by WRT Audi driver Jonathan Aberdein's multiple scrapes in battle - including one with Jamie Green - which helped the two-time DTM champion close in on the pack.

After a long-running battle with Green, Wittmann managed to narrowly scrape ahead on the exit of the heavy-braking Turn 1 right-hander following an on-the-edge battle, just hours after Green was cleared of an alleged block on Wittmann in the earlier qualifying session.

Green would eventually finish fifth behind Aberdein - who took his joint-best DTM result despite a clash with BMW's Sheldon van der Linde at the Coca-Cola Kurve that caused bodywork damage.

Loic Duval would also pass van der Linde but was shown a black and white flag for forcing his BMW rival wide on the way to sixth place.

Van der Linde finished in seventh ahead of BMW stablemate Joel Eriksson, who climbed from 13th on the grid.

BMW's Timo Glock was ninth after falling to the rear of the field at the start before working his way up the order, with Robin Frijns recovering from a similar situation by running the longest first stint of any Audi driver.

But Frijns was disqualified after the race for using a wrongly allocated tyre, promoting Daniel Juncadella to the final points scoring position.

Jake Dennis was forced to retire in the second half of the race after his crew was forced into unspecified repairs right up until the start of the race.