In an action-packed race slowed by a pair of lengthy safety car periods, polesitter Marco Wittmann led the bulk of the 40 minutes.

However Wittmann had to withstand relentless pressure from Wehrlein, who joined him on the front row of the grid.

With the aid of DRS, Wehrlein looked around the outside of Wittmann's BMW at the final corner on two consecutive laps to no avail.

The next time around, with four minutes remaining, he turned his focus to the inside, making it stick and skipping away to win by 1.8 seconds.

Making his day even sweeter, he moves to the top of the standings for the second time in 2015.

The BMW driver was defending fourth from Ekstrom, who moved down the inside and the pair made contact as they turned in, sending both cars into the tyre barriers.

"What the fuck did he do?" Glock asked over his team radio.

"I was not expecting him to turn in when we are already side by side," Ekstrom told his team.

Wittmann had enough to hold out Jamie Green and finish second, while Green was jumped for third at the final corner by Bruno Spengler, making it a pair of BMWs on the podium.

Still, fourth for Green, just ahead of Daniel Juncadella, represents his first points since the Saturday race at the Norisring at the end of June.

Edoardo Mortara was sixth, ahead of Gary Paffett - who was the race's big mover from 20th on the grid - Tom Blomqvist, Nico Muller and Mike Rockenfeller. 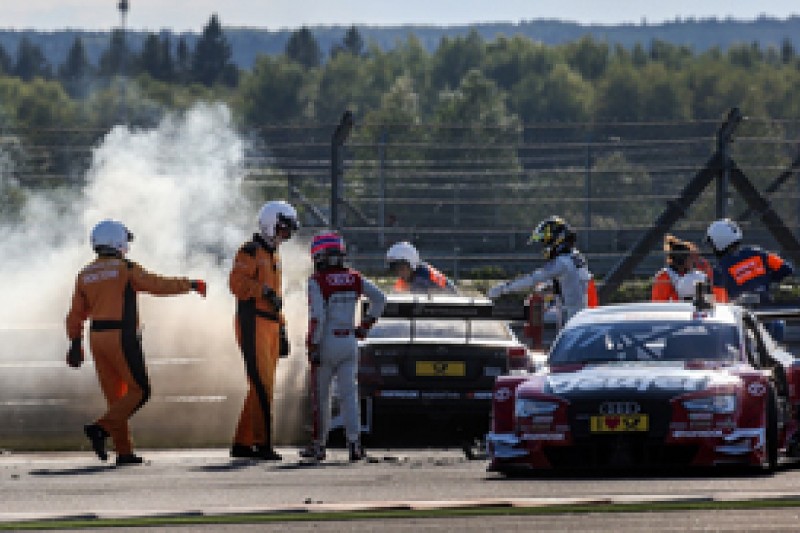 Miguel Molina's race from eighth on the grid only lasted as far as the first corner.

The Audi driver went into Turn 1 side-by-side with the slow-starting Blomqvist, but was spun to the inside across the circuit, where he was collected by Christian Vietoris, eliminating both cars on the spot.

The field split to miss Molina, and when they rejoined, Paul di Resta was turned around after contact from Rockenfeller at Turn 2.

With the incident to be investigated - along with the Turn 1 and Glock and Ekstrom clash - post-race, di Resta eventually finished 14th.

On debut as Timo Scheider's replacement, Antonio Giovinazzi was 19th, the last of the runners.