The new GT3 era of the DTM began in earnest on Friday, with two 45-minute practice sessions taking place at the Italian Formula 1 venue.

Liam Lawson then lapped the circuit just 0.024s adrift in the sister Ferrari to make it a one-two for Red Bull, with Muller remaining third.

Testing pacesetter Maximilian Gotz managed to find more time at the midpoint of the session, his time of 1m47.624s in the HRT Mercedes putting him just fractionally ahead of Albon.

Gotz’s lap wasn’t beaten until the second practice in the afternoon, when GT Masters regular Ellis - who skipped FP1 along with Winward Mercedes team-mate Lucas Auer - managed a 1m47.617s on his first real flyer.

There were no other improvements at the front of the field in FP2, as Ellis, Gotz, Albon and Lawson made up the combined top four - the quartet separated by just 0.071s. 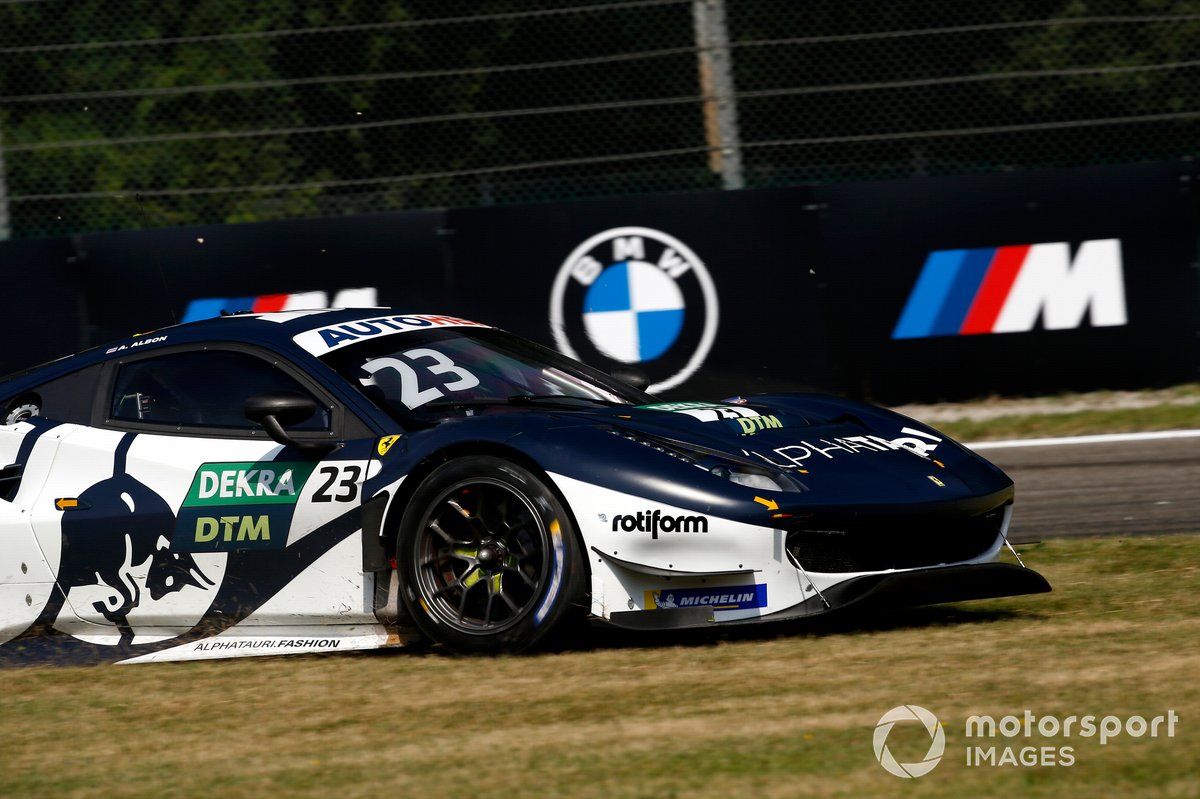 Team Abt Audi driver Kelvin van der Linde set the third fastest time in the afternoon, 0.331s off Ellis, with Arjun Maini ending up fourth in the GetSpeed Mercedes.

However, the Indian racer is under investigation after the right-rear wheel on his Mercedes-AMG GT3 was dislodged in the pitlane just as he passed a Walkenhorst mechanic, who was rolling Marco Wittmann’s BMW into the garage.

The loose wheel bounced across the fast lane and then back before coming to a rest, with Maini parking the car at the end of the pitlane.

Wittmann, whose mechanic avoided the out-of-control tyre, ended FP2 just behind Maini in fifth with a time of 1m48.247s, as Sheldon van der Linde run finished sixth in the Rowe Racing BMW.

Esteban Muth was seventh quickest in the lead J3 Motorsport-run Lamborghini Huracan, with Auer ending up nearly a second off his team-mate in eighth. The top 10 was completed by 2013 champion Mike Rockenfeller (Abt) and Maximilian Buhk, the latter substituting for Gary Paffett at the Mucke Mercedes team while the British driver is on Formula E duty.

After running near the front in FP1, Albon and Lawson propped the timesheets in the afternoon, ending up 17th and 18th in their respective Ferraris.

DTM returnee Daniel Jucandella, who finished sixth fastest in the morning for GruppeM Mercedes, didn’t take part in FP2 later in the day.