Green had started from third but cleared front-row starter Tom Blomqvist early on, before later passing Wickens having homed in on the Mercedes man during the middle phase of the race.

Wickens converted pole into an early lead at the start as Blomqvist initially held second, but Green wasted little time in pouncing for the position as the Team RBM BMW driver slipped back - making a move for second at the start of lap four with fellow row two starter Gary Paffett following him through.

Wickens had appeared comfortable enough in the lead at first but was unable to escape, and briefly relinquished the net lead of the race during the pitstop phase to Green - who stopped a lap later - before back sweeping around the Audi.

But Green's stop put him right on Wickens' tail and after a handful of laps within a second of the Mercedes he swerved to the left along the pit straight after deploying his DRS to snatch the lead. 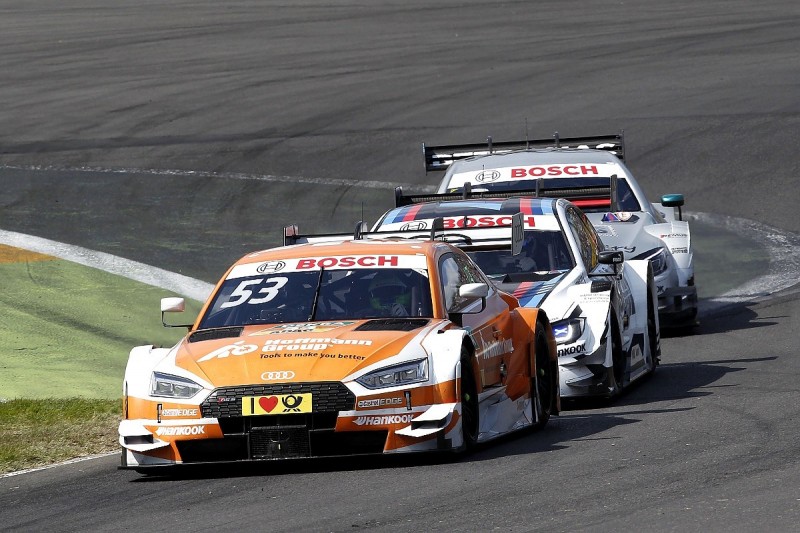 The Team Rosberg driver then raced immediately out of DRS range to ensure Wickens could not retaliate on the following lap, before pulling away in clear air to win by a comfortable six seconds.

Fellow Audi driver Mattias Ekstrom was also able to overtake Wickens in the closing stages to claim a remarkable second despite stopping on the first lap, while Wickens did at least stop the slide with his second podium of the weekend as he edged Paffett for third.

Like Ekstrom, Mike Rockenfeller also opted to pit on the opening lap and while he could not maintain the same pace as the Swede, he continued his record of scoring in every race at the start of the season with a second fifth-place finish of the weekend ahead of Team Abt Audi driver Nico Muller.

Green's victory elevates him back to second in the standings with 53 points, 16 behind Mercedes driver Auer - who also has two wins to his name this season.