Newly-crowned DTM champion Maximilian Gotz says he was anticipating a collision between title rivals Liam Lawson and Kelvin van der Linde in the DTM finale at the Norisring.

Lawson and van der Linde locked out the front row of the grid for Sunday’s final race of the season, with Gotz qualifying some way behind the leading duo in fifth place.

Van der Linde, too, would finish outside of the points after picking up a puncture on his Audi, coincidentally after a collision with Gotz right after making his pitstop.

While Mercedes' team orders made the difference between Gotz winning the championship and finishing second, it was actually the clash between Lawson and van der Linde that put him in contention for the title in first place.

Speaking after his championship triumph, Gotz said he knew from his past DTM experience in 2015-16 that his title two rivals would come to blows at the hairpin, which had been the scene of several major crashes in recent years.

"It’s hard to believe now we are champions, but before the race I said 'okay, let's take it easy, you're third in the championship anyway and others will sort it’ and exactly this happened," Gotz said.

“The war started in Turn 1, like Saturday, and I hoped for a bit to be honest.

"This is the kind [of thing you know from] experience you have as a driver that when there are two contenders on the front row and there's only one option for one guy to get in front and the opportunity to get more points than the others, usually there's a crash and exactly this happened.

“If you’re a bit aggressive on brakes and you go wide, a big mess happens, and exactly this we saw.

"[Daniel Juncadella, Lucas Auer and myself, we know exactly what happens in Turn 1 at Norisring and we were talking about it before the race already that we should take care about ourselves, not touching each other, give each other some room, and everything else resolved automatically.

“So in the end it was of course today a help also from the race I got, maybe karma came back to me because Kelvin was really defending too hard from me and he got a puncture. But it's part of the game.“ 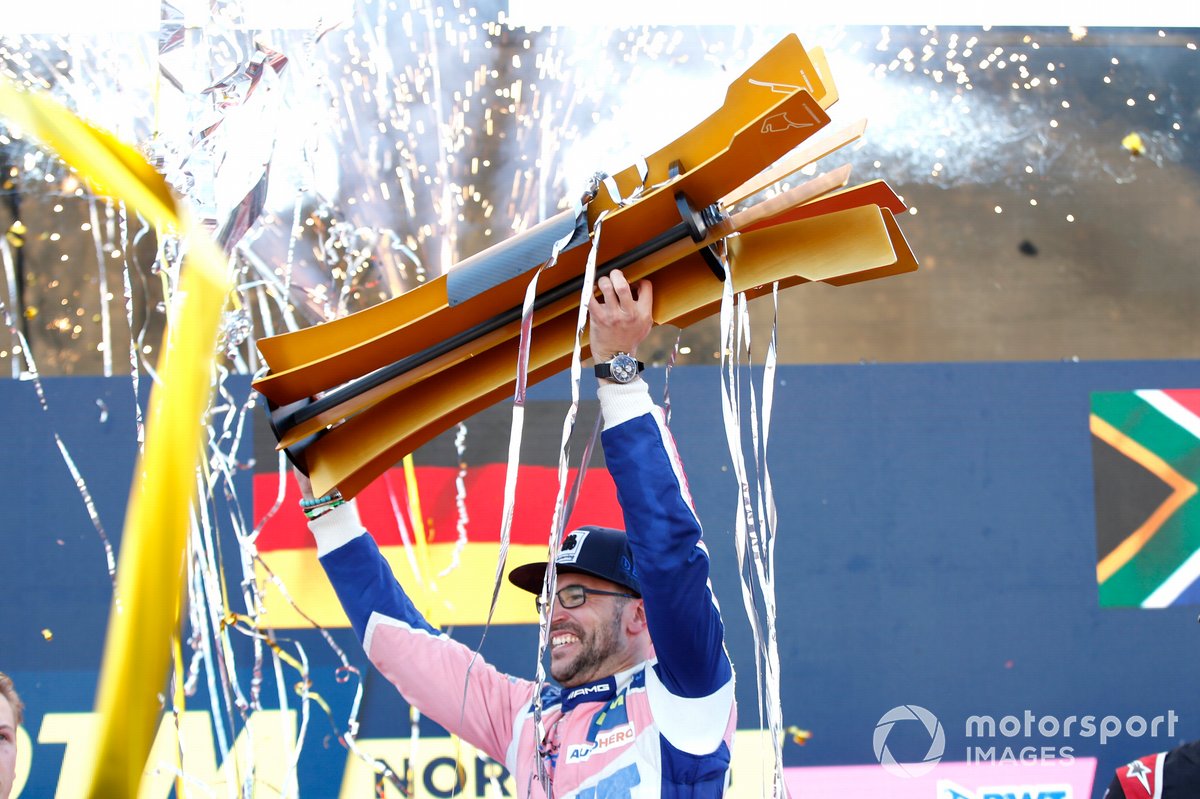 Although Gotz didn't lead the championship until Sunday at the Norisring, he was one of the most consistent drivers in the field, finishing on the podium in eight out of the 16 races and enduring just a single non-points result all year.

Gotz admitted that qualifying remained a weakness for him all season, as he ended the year without a single pole position, but says it was his ability to score points on a regular basis that allowed him to steal the title from Lawson’s grasp.

“I think experience with GT3 cars and also knowing all the tracks, especially here at Norisring [were key to the title],” said the 35-year-old.

“Kelvin was not driving here in old times in DTM and also Liam.

“We saw good races throughout the year, great battling between us. I think our strengths were being just consistent and not making mistakes, just collecting points.

“I've now been eight times on the podiums. Yeah not so much on pole position, but this was our weakness this year not getting much points for qualifying and being a bit in trouble especially in the second half of the season.

“But the race performance itself was pretty good and we were consistent. I had just one retirement in the first race at the Lausitzring. Without this it would also look completely different in the end.

“We also suffered a bit in qualifying, we have to work on this. but in the end, I think we got the most points over the year.

“We did a great team work and effort and believed in each other and in the end we were at the end of the race P1 and finally champion.”