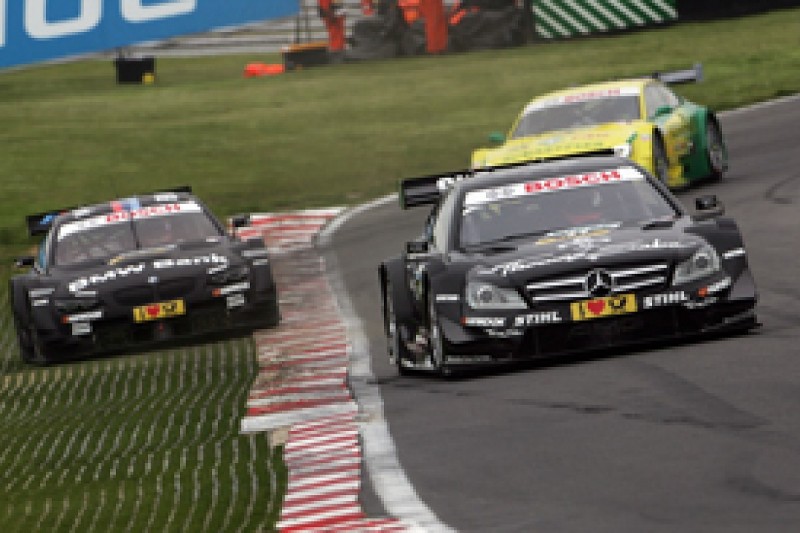 From pole position, the HWA Mercedes driver steadily built his lead up to almost three seconds over Bruno Spengler's fast-starting Schnitzer BMW by half-distance and eventually won by nearly twice that amount to increase his championship lead to 25 points over the Canadian.

Spengler was on a charge in the second half of the race, and spurred on by the combination of slight contact for Paffett when he was lapping Adrien Tambay's Audi and a quicker pitstop than the home hero, reduced his deficit to a little over 1s with 20 laps left.

As hard as he pushed though, Spengler could not get any closer, and instead had his mirrors full of Mike Rockenfeller's Phoenix Audi by the finish after damaging his splitter and losing pace. The German could not make his speed count and finished behind the BMW to take what was still his best finish of the year.

Last year's Brands Hatch winner Martin Tomczyk was the chief overtaker in the opening few laps. The defending series champion passed Christian Vietoris for seventh at Clearways on the opening lap after the HWA driver fluffed his start from the outside of the front row, and he then repeated the move on Tambay's Abt Audi a lap later, although not without first pushing the Frenchman wide mid-corner.

He latched on to the tail of Filipe Albuquerque's Audi but could not pass until the second round of pitstops, when the Rosberg pit crew had a problem tightening his right-front wheel. That lost the Portuguese driver four seconds and the same number of places.

Other than Tomczyk, who took his best finish of the year in fourth, the chief beneficiaries of Albuquerque's problem were Abt driver Mattias Ekstrom and Vietoris, who came home fifth and sixth.

Next up was Miguel Molina, who came out ninth after his final stop, but passed Albuquerque and Mortara in separate moves on the run up to Paddock during the final 20 laps.

The Rosberg cars both appeared to suffer from braking issues late on as both cars ran wide at Druids while under pressure from Jamie Green and ceded position to the HWA Mercedes driver.

Green finished eighth, ahead of Mortara and Albuquerque. Augusto Farfus looked set to be in the hunt as well, but spent too long bottled up behind Tambay and could not make enough of an inroad into his deficit to the Rosberg cars in the final stint.

Andy Priaulx was an early retiree after sustaining damage to his RBM BMW and making an unscheduled tyre stop, while Timo Scheider pulled out at half distance with an engine problem.