Porsche driver Dennis Olsen survived a late rain shower to clinch his maiden victory in the DTM at Spa-Francorchamps, as a puncture hurt the title prospects of Lucas Auer.

Olsen made a clean start from pole position in his SSR Performance Porsche to lead the field after lap 1, while Winward Mercedes driver Auer got the jump on Thomas Preining's Bernhard Porsche on the run up to Raidillon.

Auer maintained the pressure on Olsen for the entire first stint, keeping the gap under a second with a series of fastest laps. The Austrian then rolled the dice by pitting early on lap eight for his mandatory stop, but the attempted undercut backfired when a fumbled tyre change cost him at least three seconds.

This meant that Olsen could come into the pits the following lap and still come out in the net lead, while Auer was forced to repass both Laurens Vanthoor and Maximilian Gotz when they made their respective stops later in the race.

Olsen was well clear of Auer when the Mercedes suffered a sudden puncture exiting Eau Rouge, forcing him to retire.

After Auer’s exit it was his Winward team-mate Gotz who emerged as Olsen’s closest challenger. The defending champion managed to close within a second of the Norwegian with four laps to go, as a sudden bout of rain in the first sector threw a spanner in the works.

But the rain subsided quickly and Olsen was able to hang on to the top spot by just 0.818s, clinching Porsche’s second-ever victory in the DTM following Preining’s triumph at the Norisring in July.

Second nevertheless marked a first podium finish of the season for Gotz, whose previous best-result of 2022 was a fourth at the Nurburgring. 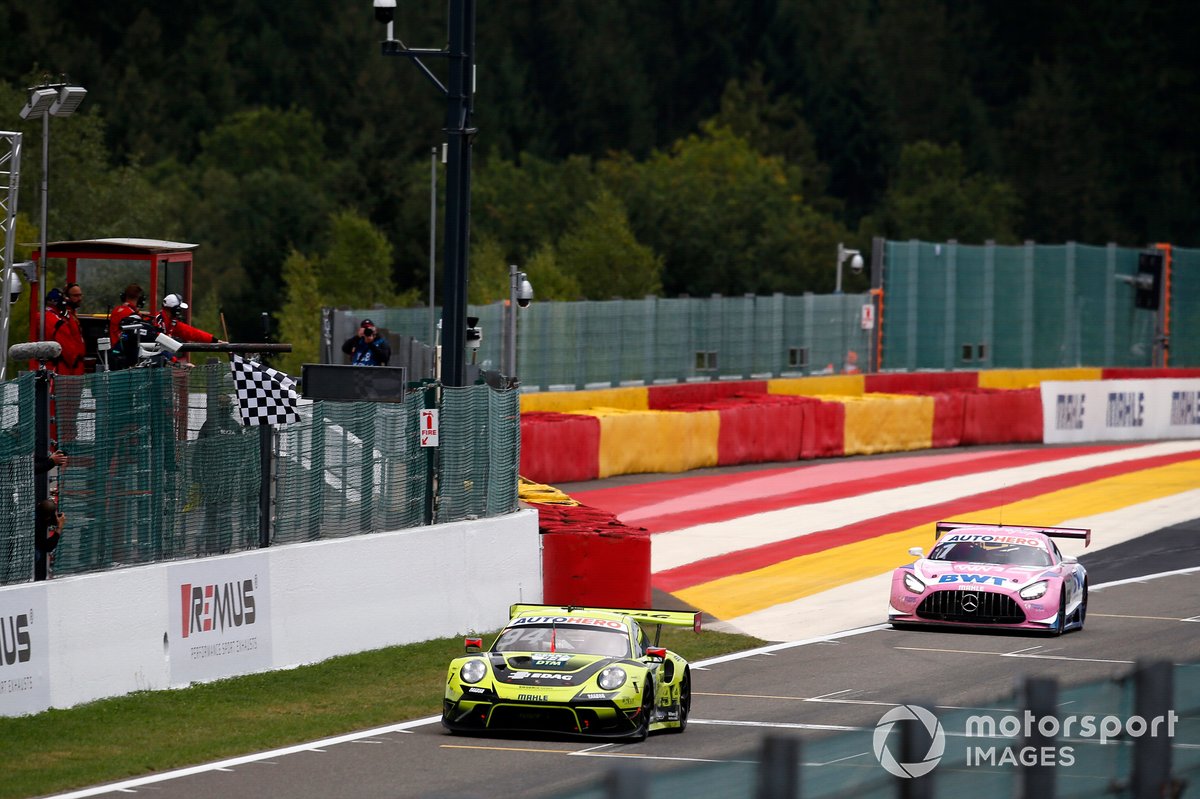 Preining made it two Porsches on the rostrum after successfully recovering from a major tank slapper at Raidillon on the opening lap that initially dropped him to ninth.

Three-time DTM champion Rene Rast made a sluggish start from ninth on the grid and fell to 10th place, but recovered lost ground by going long in the first stint, climbing up to fourth at the finish.

Rast’s Abt Audi team-mate Kelvin van der Linde finished a strong fifth, while Team Rosberg’s Nico Muller made it three cars from the Ingolstadt-based marque inside the top six.

Red Bull driver Felipe Fraga was classified seventh in the lead AF Corse Ferrari, while Grasser Lamborghini’s Mirko Bortolotti charged from 20th on the grid to finish eighth, making most of his moves in tricky conditions in the final laps of the race.

Walkenhorst BMW’s Marco Wittmann followed Bortolotti after his own poor qualifying, moving up to ninth on the final lap after overtaking Fraga's team-mate Nick Cassidy and David Schumacher in the third Winward Mercedes.

Cassidy eventually picked up the final point in 10th, while Schumacher just held off championship leader Sheldon van der Linde - who had qualified down in 22nd - for 11th at the flag.

Auer would have moved up to 103 points had he not retired from the race while running in second.