The track conditions at the Red Bull Ring were so poor at the start of qualifying that GruppeM driver Mikael Grenier crashed his Mercedes on his outlap, forcing race control to deploy red flags just a minute into the session.

When the action resumed after a short delay, several more drivers went off the track as rain continued to lash down, but no more incidents were recorded for the next part of qualifying.

Reigning champion Maximilian Gotz set the early benchmark with a 1m41.175s in his Winward Mercedes, before his GruppeM team-mate Engel moved the goalposts further with a 1m40.776s.

Gotz made a small improvement on his next flying lap to solidify second position, as the remainder of the field struggled to break the 1m42s barrier in low-grip conditions.

Saturday race winner Nick Cassidy closed within a second of Engel’s time in his Red Bull Ferrari with six minutes left on the clock, but the session had to be halted again before more improvements could be made to recover the stranded Audi of Dev Gore.

The track conditions had worsened by the time the drivers returned to the track for a final shot at pole position and, with just two minutes still to run, Ricardo Feller beached his Audi in the gravel trap.

A decision was made not to restart the session after the red flag, granting Engel pole position for the second leg of the Austrian double header. 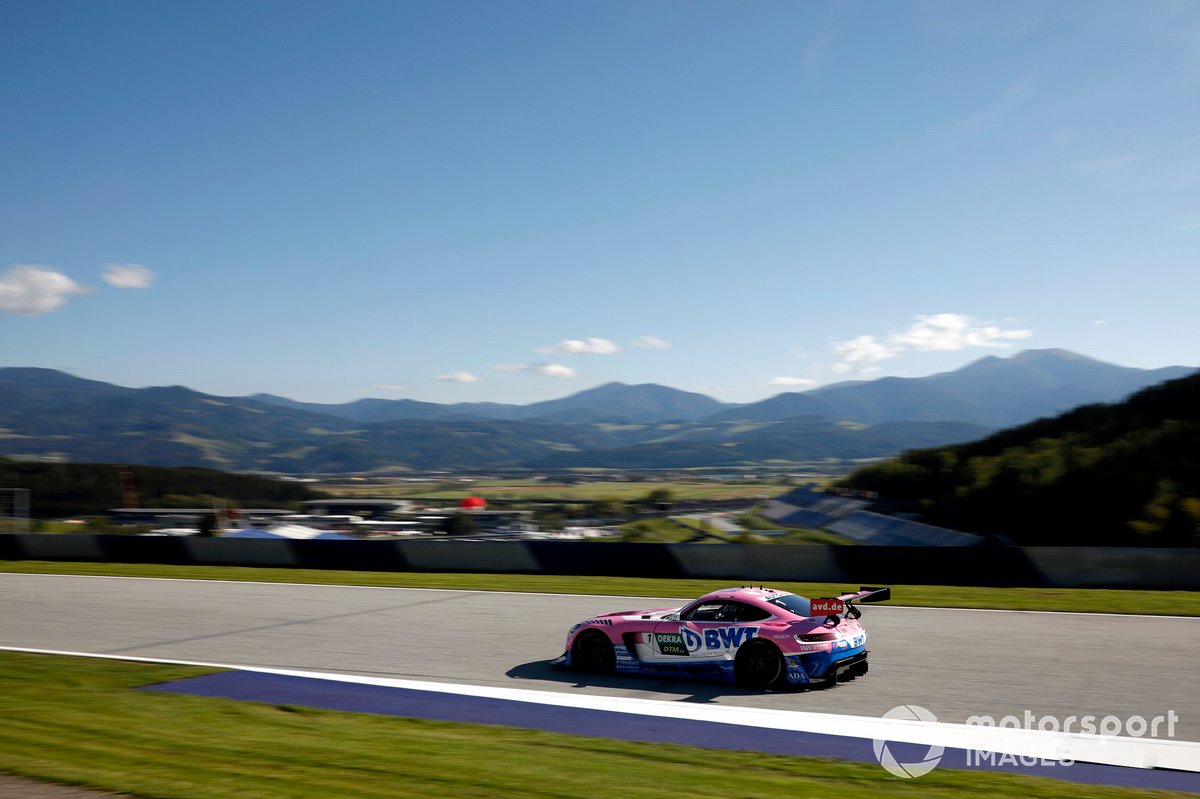 Gotz qualified just over two tenths behind Engel in second, but will drop down three places on the grid as a result of a penalty carried over from Saturday’s opening race.

This will promote Cassidy’s Red Bull Ferrari to third ahead of teammate Felipe Fraga, who was lucky to avoid the barriers after a major off-track excursion at Turn 2 between the first and second red flags.

After a tough Saturday for BMW, Philipp Eng put his Schubert Motorsport M4 fourth on the grid ahead of Gotz with a time of 1m41.885s, just over a second down on Engel’s chart-stopping time.

His team-mate and championship leader Sheldon van der Linde qualified fifth-fastest, but will have to take the start in 14th place after being handed a late nine-place grid drop for repeated track limits infringements in Saturday’s race.

Arjun Maini will line up sixth on the grid in his HRT Mercedes, ahead of the top Porsche of Thomas Preining and Winward Mercedes’ David Schumacher.

Audi star Rene Rast wasn’t able to fully capitalise on van der Linde’s penalty and could only manage the 10th quickest time in qualifying, which will leave him ninth on the grid ahead of Abt teammate Feller.

Among other championship contenders, Lucas Auer couldn’t join his Mercedes stablemates near the front of the pack and will line up in 13th place, while Mirko Bortolotti qualified a disappointing 23rd in the Grasser Lamborghini.