A DTM statement said: "All the three violated a very clearly formulated paragraph of the DTM's sporting regulations: 'From entering the working lane, a driver has to reduce his speed to an extent that he is able to stop his car at his garage without endangering other competitors or the marshals.'

"In other words: the driver has to do everything to avoid any danger. Should he make an accident, nevertheless, he was too fast and is penalised. That's very similar to what happens in the day-to-day traffic: if you cause a rear-end collision you will be penalised by the police for inadequate [inappropriate] speed.

"The reasoning 'I wasn't too fast', doesn't count as you quite obviously were too fast and didn't brake hard enough for avoiding the accident."

Against the observation that none of the drivers were speeding in the pits, the DTM continued: "A road-traffic example illustrates the problem. In the German cities, 50km/h are compulsory but this can be far too fast for braking on wet cobble stones and may result in an accident.

"In this case, neither the city that laid the cobble-stone pavement nor the police that didn't block the road in wet conditions are responsible - but the driver who was too fast for the weather conditions."

Race winner Marco Wittmann believes none of three should be blamed for what happened.

"It was super-slippery in the pitlane," said BMW's two-time champion, "I nearly crashed into my guys.

"There is no blame on anybody for what happened."

BMW's third-placed finisher Philipp Eng added: "No miscredit to any of the drivers - it's so difficult to judge.

"I was rolling in at 10km/h and even that was too late for my braking." 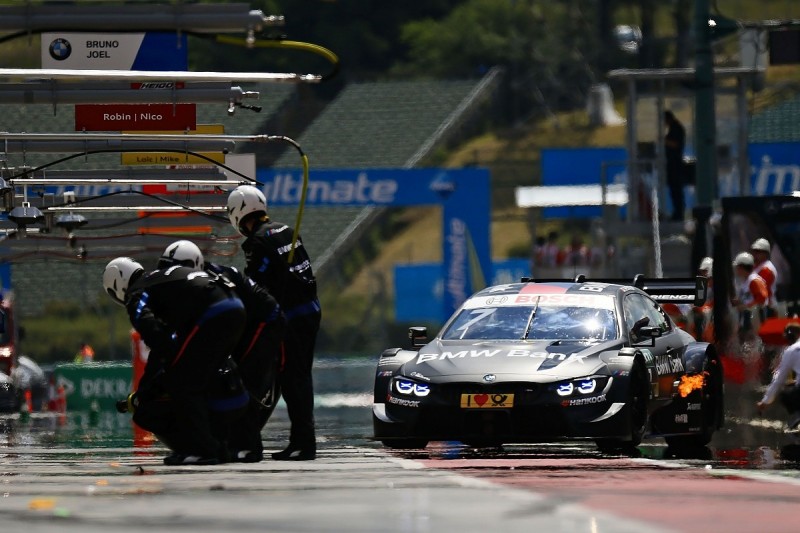 The DTM pointed out that the circuit - including pitlane - was homologated by the FIA in 2015, but Saturday race winner Paul di Resta suggested the concrete could be replaced.

"Maybe it needs reviewing whether the pitlane has concrete in the place it does," the Mercedes driver told Autosport, "but the most important thing is that everyone is OK."

That opinion was supported by Jamie Green, who said concrete was "definitely the wrong surface" for the pitlane.

Answering questions about why the race was not halted immediately after Auer's accident, the DTM said: "Right after the accident it wasn't clear that the marshal was seriously injured. Therefore, the race wasn't red-flagged but the safety car was sent out.

"The regulations say that coming in for your obligatory pitstop isn't possible from this point in time. So, the doctors and paramedics actually should have the time and possibility to work without being disturbed and therefore, red-flagging the race shouldn't be necessary."