Rene Rast is "afraid" Audi's resurgent DTM form at the Hungaroring last weekend was track specific, and fears the manufacturer could struggle again at subsequent rounds

Audi has lost its aerodynamic edge over Mercedes and BMW, with changes for the 2018 season including a reduction in downforce levels of around 30% compared to 2017.

Mike Rockenfeller's runner-up spot in the second Hockenheim race remains Audi's best finish of the season, but Audi was much improved at the Hungaroring as five of its drivers scored points in race one, which included a third place for Nico Muller.

Rockenfeller was then fourth - and the leading non-BMW - in Sunday's second race.

But Rast, who was fourth on Saturday and close to Muller, said it was not clear whether Audi's improved performance was the result of genuine progress from the manufacturer or the circuit's characteristics suiting its RS5.

Audi dominated at the Hungaroring last year and also won both races in 2016.

"We'll see in two or three weeks when we are in Norisring [whether Audi has made a step forward]," Rast told Autosport. "We don't know yet, we've been strong here in the last couple of years.

"We followed a certain set-up philosophy and it looks like it is working here.

"We don't know if it is also working on other tracks because we haven't done a lot different things on the set-up, compared to Lausitzring.

"We are afraid that maybe we'll go back to where we were in Lausitzring [where no Audis scored points in race one] for Norisring." 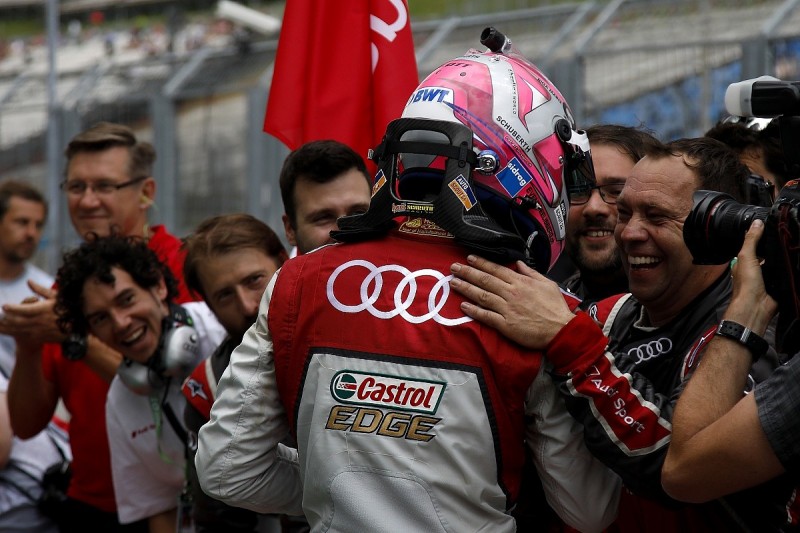 Muller, who scored his first points of the season with his race one podium, believes Audi has made slight progress.

"I think we did make a small step," he said.

"We tried to adapt to the characteristics of the Hungaroring and really put a lot of effort into reading what the track needs in order to unlock the full potential of our car.

"We scored good points as a whole team which is positive and nice to see."

Rockenfeller is Audi's leading driver in the points in ninth, two places ahead of 2017 champion Rast but some 56 points behind current leader Timo Glock.

Rast added he thinks Audi is "still missing a bit of pace on other tracks" when asked if a defence of his title was viable.