Porsche has ruled out upgrading its 911 GT3 R to make the car compatible with the GT Pro regulations that are set to be introduced in the DTM next year.

The DTM will adopt GT3 cars in 2021 following the exit of Audi as a factory entrant, but promoter ITR is planning to beef up the engines to produce 600bhp to allow the series to differentiate itself from other championships using the same ruleset.

Ever since the regulations were announced, there has been no clarity over whether teams or their affiliated manufacturers will upgrade their existing GT3 cars to GT Pro standards.

Both BMW and Audi have officially committed to the new era of the DTM, but neither has stepped forward to offer factory-fitted upgrades to their GT3 models.

Porsche has sold over 100 units of its 911 GT3 R, and the DTM would benefit immensely from its presence in the series, but the Stuttgart-based manufacturer has made it clear that it will not make changes to the car to comply with the new GT Pro regulations.

"If it comes to that, Porsche Motorsport will evaluate the use and support possibilities accordingly. These deployments would be a classic customer sport topic.

"We are in contact with ITR and have sent the responsible parties all the documents on the current 911 GT3 R on request.

"[But] there will be no further development or technical changes to the existing 911 GT3 R."

This means that Porsche will not be selling specialised engine kits to customers to meet the DTM's mooted 600bhp requirement.

While the flat six-cylinder motor fitted in the rear of the 911 GT3 R is only capable of delivering 520bhp, Porsche could have potentially deployed the engine it uses in the 911 RSR GTE car (below) and run it without the air restrictors. 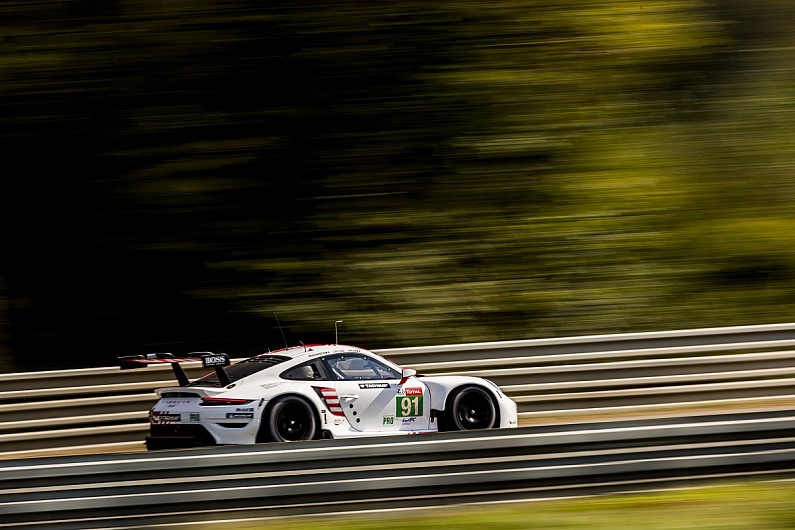 One solution would be to lower the weight of the 911 GT3 R to make it more competitive against its rivals even with a power deficit, but 1996 International Touring Car champion and DTM race-winner Manuel Reuter believes it could put the car in a disadvantage in wheel-to-wheel battles.

"That's not impossible, but it would also involve a lot of effort," said Reuter.

"I don't think that will work. The car is at the limit, considering what it was designed for.

"And then you would have to spend an enormous amount of money.

"If I have a car concept that has much less power and is much lighter, then I can adjust it via the BoP in terms of [theoretical] laptimes, but not for a duel.

"This car would always have a certain weakness on the straights, and in the corners the others would be in its way."

The DTM has already made two compromises to the GT Pro regulations by allowing rolling starts and performing a U-turn on its plan to drop driver aids - both done following resistance from manufacturers to make changes to their base GT3 cars.

This leaves the planned 600bhp upgrade as the main differentiator between the DTM and other series using GT3 regulations.