© 2020 Autosport.  All rights reserved.
Previous / Wittmann: BMW not yet back in title fight
Next / Van der Linde wins at Assen following red flag

Robin Frijns passed Loic Duval to claim his maiden DTM win in front of his home crowd at Assen, as Audi dominated proceedings to monopolise the top five spots.

Polesitter Duval got away cleanly to retain his lead into Turn 1, with Ferdinand Habsburg moving up to second after rocketing away from fourth on the grid.

While Duval held station out front, Habsburg couldn't keep up with the same pace as the factory Audi driver and slowly started dropping down the order, slipping down to sixth by lap 12.

Frijns moved back up to second, with Rene Rast assuming third having passed his title rival Nico Muller on the opening lap of the race.

Duval was the first of the leaders to make his pitstop on lap 16, with Rast and Muller following him a lap later.

Rast's stop was three seconds slower due to a delay in changing the front-right tyre, which was just enough for Muller to snatch third spot from the reigning champion.

Meanwhile, at the front, Frijns started closing in on Duval for the lead of the race and got within a second as Muller and Rast also joined the battle for victory.

However, Duval's pace began to fade and he lost six tenths on lap 29 alone, bringing Frijns and the rest of the chasing pack into play.

Frijns got a better exit out of the Turn 5 hairpin and pulled alongside Duval on the backstraight, before making a clean move into the following corner to take the lead for the first time.

Muller was unable to pass Duval for second, giving Frijns the breathing space to score his first-ever victory in the DTM, which he fittingly achieved in front of a limited home crowd at Assen. 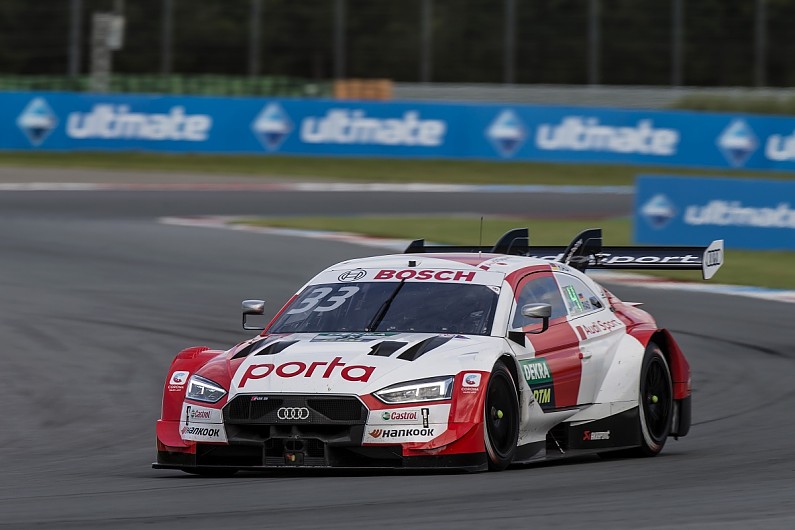 Rast (above) couldn't cope with the pace of the top three and fell back to fifth place behind Mike Rockenfeller, who was able to take advantage of fresher tyres to pass the reigning champion on lap 33.

Jonathan Aberdein finished as the top BMW driver in sixth, more than 25 seconds behind race winner Frijns as the Munich-based manufacturer failed to match the performance of Audi.

Habsburg eventually finished seventh in the final order, but crucially ahead of the factory BMWs of Sheldon van der Linde and Timo Glock.

The race had to be shortened due to a delay in wheeling Jamie Green's Audi back into the pits after he stalled on the formation lap, although he joined the action midway through the race, finishing 14 laps down in 16th position.