Sheldon van der Linde claimed an unlikely victory for BMW in a rain-interrupted DTM race at Assen, which was red-flagged late on due to a massive crash for Fabio Scherer

When the five lights went out after the opening two laps behind the safety car, Loic Duval sprinted into the lead from the similarly fast-starting Robin Frijns, with polesitter Rene Rast dropping down to third.

Duval managed to build a two-second buffer on the opening lap and initially did well to hold onto that advantage, before Frijns cut down the deficit by half with the fastest lap of the race on the eighth tour.

Two laps later, Frijns got a better exit out of the final chicane and deployed the DRS on the start/finish straight, taking advantage of the superior top speed to pass Duval for the lead into Turn 1.

Once out in front, Frijns managed to build a three-second gap in the space of one lap, as Duval fell into the clutches of Rast and championship leader Nico Muller.

Both Rast and Muller cleared Duval with relative ease, but they had to immediately shift their focus to Timo Glock, who had charged his way from ninth on the grid in the lead BMW.

Glock passed Rast on lap 18 and then overtook Muller two laps later, before setting about chasing Frijns, who was 11 seconds out front.

Muller was the first of the leaders to dive into the pitlane for the mandatory stops on lap 21, with Frijns and Glock following a lap later.

All of this allowed van der Linde to take the lead, the BMW driver having delivered a strategic masterstroke by pitting early and leapfrogging Frijns when the long-time race leader came into the pits. 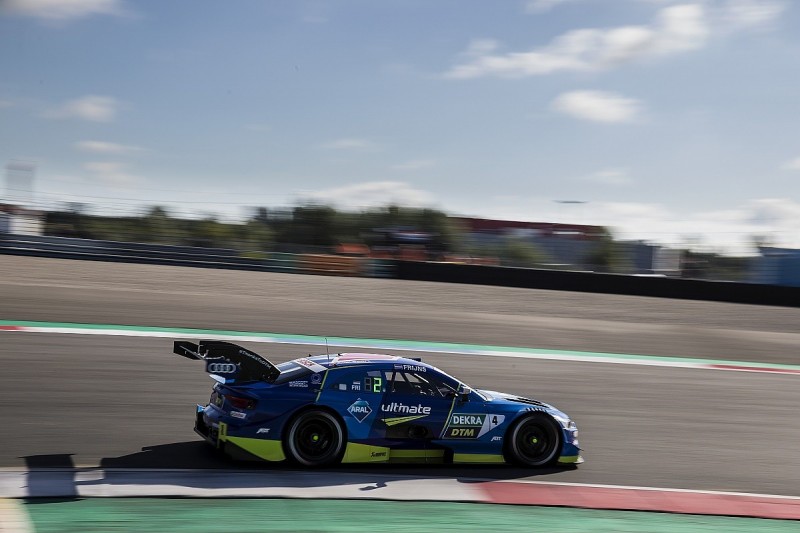 Muller got the jump on Glock to move up to third, with Duval also moving ahead of Rast thanks to an earlier pitstop.

Frijns could have passed van der Linde for the lead on fresher wet tyres, but the safety car had to be deployed after Scherer crashed his WRT Audi heavily into the barriers on slick tyres.

The race restarted with a rolling start with around six minutes remaining, with van der Linde leading from Frijns and Muller and eventually took the chequered flag by over two seconds - scoring his maiden victory in his second season in the DTM.
Saturday winner Frijns finished in second, with Muller completing the podium spots, while

Duval, who previously lashed out at his team for fitting wet tyres during his pitstop, took fourth after successfully fending off Rast in the closing stages of the race.
Glock couldn't replicate his early pace after the red flag and slipped to sixth in the final order, ahead of the top WRT Audi of Ferdinand Habsburg.

Marco Wittmann was eighth ahead of BMW stablemates Philipp Eng and Lucas Auer, the latter bagging the final championship point after starting the race last on the grid.

Robert Kubica ran ninth early on after qualifying a career-best 10th in the ART BMW, but the decision to stop early on lap seven - after just five laps of green-flag running - backfired and he finished down in 14th place.