Polesitter Rast had held his advantage comfortably through the opening phase of the race as Mike Rockenfeller stormed past front-row starter Wittmann at the beginning to run second, and act as a buffer for the leading Audi.

That meant Rast could build a lead of 2.6 seconds over Wittmann early on, but the BMW driver almost took the lead following the mandatory pitstops.

Wittmann had pitted at the end of lap 17 of 38, attempting an undercut on Rast, and the Audi driver responded by pitting on the following lap.

A marginally slower stop for Rast meant he came out of the pits with a narrow advantage over Wittmann and looked set to be passed due to running on cold tyres, but a safety car spared the Audi driver after BMW's Philipp Eng lost power on the run to the hairpin and pulled off track.

At the restart, Rast powered clear of Wittmann only for the BMW driver to progressively reel his rival in, finally making a move for the lead by diving down the inside at the hairpin.

Rast hit back at the same corner on the following lap, running alongside Wittmann on the exit as they headed for the high-speed Turn 7 right-hander, moving back ahead of the BMW before turning in.

Wittmann had significantly less DRS and push-to-pass compared to Rast and was unable to challenge the 2019 champion again.

Rast's main title rival Nico Muller had looked set to complete the podium after benefiting from the timing of the safety car but fell to 16th when he was forced to serve a drivethrough penalty for speeding in the pitlane.

That had helped Button's top 10 charge after the 2018 SUPER GT champion was hurt by a pitstop that took 17.9s, having highlighted pitstop efficiency as a weakness for his Kunimitsu Honda squad on Friday.

Falling from the lower end of the top 10 to 16th, Button began to climb through the field progressively in the second half of the race. 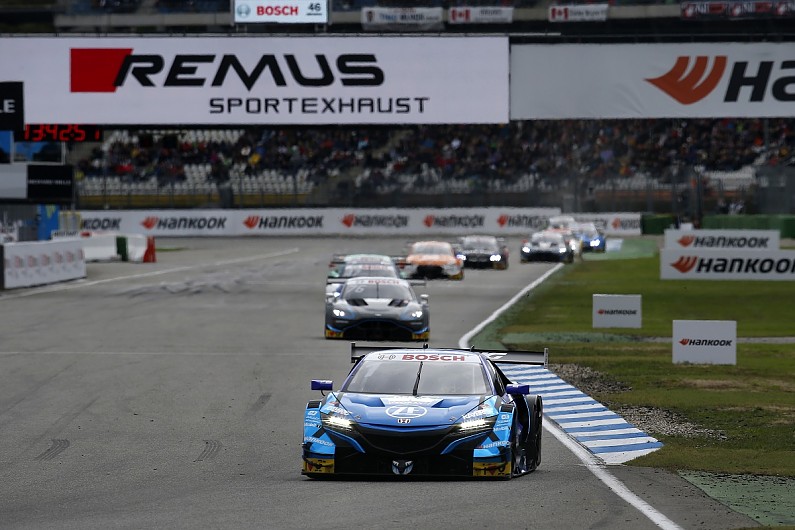 He was boosted by Pietro Fittipaldi pitching his WRT Audi team-mate Jonathan Aberdein into a spin, with the former earning a drivethrough penalty.

But Button also cleared Audi's Jamie Green late on to go 12th and battled strongly in a pack of cars against BMW's Sheldon van der Linde, coming out on top despite his rival being warned for forcing Button off the track.

Having got to 11th, he then overtook R-Motorsport Aston Martin driver Jake Dennis ahead and moved into ninth once Muller served his penalty.

Muller's demotion promoted Rockenfeller back to the podium places ahead of Robin Frijns and Loic Duval.

Timo Glock was sixth after his race was compromised by his left-hand door coming loose, requiring Glock to drive one-handed at stages before coming into the pits early to make his stop and sort the problem.

Paul di Resta was an impressive seventh and the leading Aston Martin despite complaining of a steering problem mid-race.

Bruno Spengler was eighth for BMW ahead of Button and Joel Eriksson.

Tsugio Matsuda failed to start the race when his NISMO-entered Nissan did not get away for the formation lap but he came out on track 17 laps down to take the flag.

Ryo Hirakawa took his TOM'S Lexus to 13th, having benefited from incidents for rivals after his squad opted for a first lap pitstop that meant it had to take a second stop later on in the race.

R-Motorsport's reliability problems returned with Daniel Juncadella missing out on a potential top 10 finish when he retired with a suspension problem, while Ferdinand Habsburg was unable to start the race due to an engine problem.